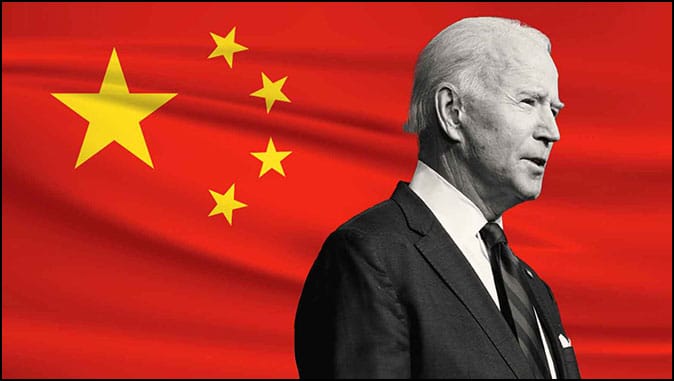 The Biden Administration vs. Law-Abiding Americans
No surprise that China’s president called Biden his “old friend.”
By Joseph Klein

The Biden administration considers American citizens who don’t toe the politically correct party line its number one threat. Not China. Not Russia. Not Iran. Not ISIS, al Qaeda, the Taliban, or other Islamist terrorists. Not the illegal immigrants flooding into the United States through the door that President Joe Biden has opened for them. Not the far-left radicals who killed and maimed innocent people, committed arson, and destroyed and looted property during a summer of riots last year.

Biden, Vice President Kamala Harris, and other senior Biden administration officials love to throw out phrases like “white supremacist” and “racial equity,” and see if they will stick. Yet, the Biden administration has ignored violence instigated on the far left by such radical groups as Black Lives Matter and Antifa. It has concentrated its law enforcement tools on conservative Americans whom it lumps broadly together as so-called “domestic terrorists” or “white supremacists.”

Biden, for example, has still not apologized to Kyle Rittenhouse for smearing the teenager as a white supremacist. To make matters worse, after Rittenhouse was acquitted on all charges by the jury for killing two individuals and injuring a third in self-defense, the White House issued a statement saying that Biden was “angry” and “concerned” about the jury’s acquittal verdict.

Did it ever occur to Biden that calling someone a white supremacist for shooting three other white men, when no blacks were involved at all in the incident, is absurd on its face?

Vice President Kamala Harris tweeted Friday night that making “our criminal justice system more equitable” requires “still a lot more work to do.” What does Harris have in mind to get the outcome that she believes is “equitable?” Mob justice?

Earlier this year, Harris claimed that one of the “greatest threats” to national security is “domestic terrorism manifested by white supremacists.” The Biden administration’s Department of Justice and FBI are operating on the same premise, going after everyday Americans who choose to resist the destruction of our institutions, including our schools, by the far left.

“In the FBI’s view, the top domestic violent extremist threat comes from racially or ethnically motivated violent extremists, specifically those who advocated for the superiority of the white race,” Attorney General Merrick Garland said last June.

The FBI’s dragnet has now extended to parents who show up at school board meetings and vehemently protest the left-wing indoctrination of their children in classrooms across the country.

Following an Oct. 4th memo from Attorney General Garland ordering the FBI to work with federal prosecutors and local law enforcement officials in addressing “harassment, intimidation, and threats of violence against school administrators, board members, teachers, and staff,” the FBI went into high gear. The FBI’s Criminal and Counterterrorism Divisions have put in place a process to track such so-called “threats.”

The FBI’s “Counterterrorism and Criminal Divisions created a threat tag, EDUOFFICIALS, to track instances of related threats,” according to an internal e-mail leaked by a concerned whistleblower. “The purpose of the threat tag is to help scope this threat on a national level and provide an opportunity for comprehensive analysis of the threat picture for effective engagement with law enforcement.”

The e-mail was signed by the FBI’s assistant director for counterterrorism and the assistant director of the bureau’s Criminal Division. The Biden administration is turning Patriot Act tools meant to stop foreign terrorist attacks on the homeland into a weapon against ordinary Americans.

Garland continued to stand behind his October 4th memo during his recent congressional testimony. But despite Garland’s assurances to the contrary, the FBI’s implementation of his directive has taken a very sinister turn.

“In an egregious abuse of power with the potential to unfairly track Americans’ activities, President Biden’s Department of Justice is using FBI criminal and counterterrorism resources to target parents,” House Republican Minority Leader Kevin McCarthy said in a statement. “Attorney General Garland must return to Congress to address, under oath, in detail, the discrepancies regarding the directives he issued involving investigating America’s parents.”

In Biden’s America, parents in this country who confront local school boards, administrators, and teachers for indoctrinating their impressionable children with ideology influenced by critical race theory are enemies of the state. Way down on the Biden administration’s counterterrorism target list are the terrorists from all over the world entering the United States through the southern border. The same is true with the al Qaeda terrorists being given shelter again by the Taliban, now that they are in charge of Afghanistan following Biden’s reckless withdrawal of American troops.

The Biden administration is also going after law-abiding gun owners by compiling information on millions of them. The Free Beacon has reported that the “Biden administration in just the past year alone stockpiled the records of more than 54 million U.S. gun owners and is poised to drastically alter gun regulations to ensure that information on Americans who own firearms ultimately ends up in the federal government’s hands, according to internal Alcohol, Tobacco, and Firearms (ATF) documents obtained by the Washington Free Beacon.”

This collection of massive records is a blatant step forward in establishing a federal database of U.S. gun owners, amounting to a federal gun registry. This could well lead to the eventual confiscation of lawfully owned guns from Americans labeled dangerous “domestic terrorists” for strongly expressing what social justice warriors consider to be “anti-immigrant” or “racist” beliefs.

In Biden’s America, certain Americans are the enemy for exercising their First and Second Amendment rights in a way that the Biden administration considers a threat of possible future violence sometime in the future.

Meanwhile, the Biden administration left behind $80 billion worth of advanced weaponry in Afghanistan for the Taliban terrorists to use as they wish, give to al Qaeda, or sell to China, Russia, and Iran.

On his first day in office, President Biden killed the Keystone XL pipeline from Canada to the United States, which cost thousands of American jobs and endangered Americans’ energy security. But Biden gave Russia’s Nord Stream 2, a natural gas pipeline from Russia to Germany, his blessing. Biden weakened sanctions that had impeded the pipeline’s completion.

Biden’s war against domestic fossil fuel production has turned the United States from being energy independent into begging OPEC for more oil.

President Biden has demonized Americans who, for various reasons, do not choose to be vaccinated against COVID-19. Saying that he had run out of patience, Biden issued an executive order setting the stage for a broad vaccine mandate. The Occupational Safety and Health Administration (OSHA) then proceeded to require that all employers of 100 or more employees “develop, implement, and enforce a mandatory COVID-19 vaccination policy” for its employees. OSHA further required that any workers who remain unvaccinated to “undergo [weekly] COVID-19 testing and wear a face covering at work in lieu of vaccination.”

Americans who believe that the United States should remain a free country challenged this mandate in court. A three-judge panel of the U.S. Fifth Circuit Court of Appeals issued a temporary stay against enforcing the mandate. The court concluded that the mandate “threatens to substantially burden the liberty interests of reluctant individual recipients put to a choice between their job(s) and their jab(s).”

Appeals filed in multiple jurisdictions have been consolidated for a hearing before the U.S. Sixth Circuit Court of Appeals. Meanwhile, OSHA has suspended enforcement of the mandate, pending further judicial rulings.

Biden couldn’t care less about the liberties of American citizens if they interfere with his radical agenda. At a CNN townhall last month, for example, Biden tried to mock those who believe that he does not have the authority to unilaterally mandate what medicines go into their own bodies. In a pathetic attempt at sarcasm, Biden twisted the freedom of choice argument this way: “I have the freedom to kill you with my COVID. Come on.”

In Biden’s America, illegal immigrants can enter and remain in the United States without being required to submit to COVID-19 vaccinations. But law-abiding Americans must be vaccinated or risk losing their jobs.

Meanwhile, during Biden’s virtual summit with Chinese President Xi Jinping, Biden reportedly did not press Xi on the origin of the coronavirus pandemic. Biden is ordering Americans to be vaccinated against a virus that originated in China (quite possibly from its Wuhan lab). But Biden avoided demanding transparency and unfettered cooperation from the Chinese government in a credible international investigation of the virus’s origins.

Without getting to the bottom of what happened and taking the necessary precautions to prevent it from happening again, we are vulnerable to another pandemic originating in China. Yet Biden let Xi Jinping off the hook.

No wonder Xi referred to Biden as his “old friend.”