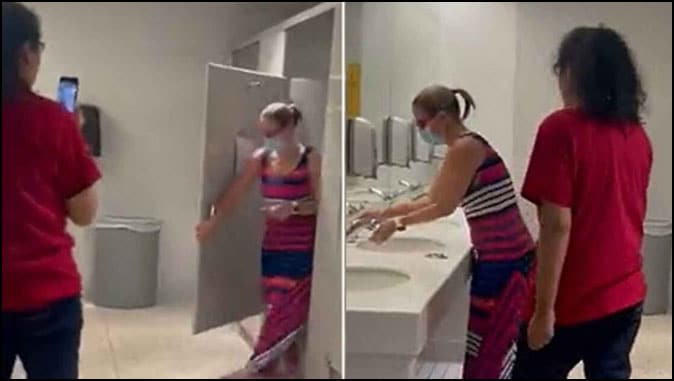 The Bathroom Harassment of Sen. Sinema was Funded by Leftist Billionaires
Old, rich leftist men like harassing women in the bathroom.
By Daniel Greenfield

When leftist activists followed Sen. Kyrsten Sinema into a bathroom filming themselves harassing the moderate Democrat, they falsely claimed they were her “constituents”.

One of the women is actually a DSA activist who lives over 2,000 miles away in Montgomery County, Maryland, one of the wealthiest counties in America.

The bathroom harassment of Sinema was intended to intimidate her into supporting the huge $3.5 trillion leftist crony spending plan that would also deprive many Americans of their civil rights through everything from car tracking to IRS surveillance for transactions over $600.

The LUCHA activists have positioned themselves as outraged grass-roots members who had no choice but to resort to these tactics to cope with the power of a United States Senator.

But LUCHA is actually part of a vast influence operation backed by some of the wealthiest and most powerful men and organizations in the country. LUCHA, which stands for Living United for Change in Arizona, is part of a network of groups under the umbrella of One Arizona. Newsweek described LUCHA, a community organizer and voter registration group, as part of the One Arizona table. The Arizona Center for Empowerment (ACE) is LUCHA’s sister group.

Seed funding for One Arizona was provided by the Four Freedoms Fund.

The triple-F coalition was a partnership between some of the wealthiest and most powerful organizations in this country, including George Soros’ Open Society octopus, the Ford Foundation, Carnegie, and the Knight Foundation.

The foundations behind FFF have a total net worth of over $40 billion.

One Arizona was meant to flip the state from red to blue by community organizing Latinos. But, as the harassment of Sinema shows, it wasn’t going to stop at just electing Democrats. Instead its goal is to hijack the state into supporting every leftist cause and threaten those who resist.

The one identified member of the bathroom harassers was a phone bank lead for the DSA and a Bernie Sanders field organizer. Behind the welter of organizations and the complex leftist networks behind them are the usual roster of leftist billionaires and the Democratic Socialists of America. Everything else is an endless array of nesting doll organizations that pop up overnight.

One Arizona’s backers are mostly not from Arizona. George Soros has estates across New York. William Huntington Reeves, the billionaire co-founder of a hedge fund based out of London, and of Unbound Philanthropy, another One Arizona backer, is known as Hawaii’s George Soros. The only green in the “grass roots” here is all the Wall Street money.

Millions of dollars in cash from some of the wealthiest leftists and groups go through One Arizona every year to achieve specific political results in a state they don’t actually live in.

“One Arizona is a movement born from struggle. We are for the people, by the people. We develop leaders. We build power, protect one another and fight as oppressed people in our community through civic participation, mentorship and training. One Arizona is fueled by a sense of justice & equity that encompasses the wide intersection of our community’s diversity,” the group’s mission statement declares. But it’s actually fueled by old rich white men.

Some of those old rich leftist men may like the idea of harassing women in the bathroom.

One Arizona isn’t a movement born from struggle, but from finance capital. The “people” are folks like George Soros who boasted of playing god and declared that when, “you speculate in the financial markets, you are free of most of the moral concerns that confront an ordinary businessman.” The diversity encompasses old white men from Hungary and Hawaii, massive funds with billions in assets based out of New York City. London, and Germany.

That’s the force that showed up to yell, “build back better” in an Arizona bathroom.

If Biden’s $3.5 trillion program to fund $250,000 electric car chargers for Tesla owners and to spy on everyone else really is about social justice, why are some of the richest men backing it?

And why do they have to disguise their network so that you have to trace back the money and personnel through a multiplicity of organizations to find out who’s really behind it all?

It’s one of those questions that answers itself.

Like Black Lives Matter, LUCHA uses the mantra of Marxist domestic terrorist Assata Shakur, currently hiding out from the FBI in Cuba. “It is our duty to fight for our freedom. It is our duty to win. We must love each other and support each other. We have nothing to lose but our chains.”

At the intersection of Communist terrorism and Wall Street cash is the paradoxical hypocrisy of a radical movement that plays at being the oppressed when it’s actually the oppressors.

What the bathroom confrontation actually revealed was how the truly powerful leftist billionaires use local organizations to harass and intimidate anyone who stands in their way. Follow the trail of yelling leftists and you end up with the money men who have taken over the Democrat Party.

Sen. Sinema isn’t being harassed because she’s not listening to her “constituents”, but because she’s not obeying the powerful men who control Biden’s puppet strings and who want that $3.5 trillion plan to bankrupt us and deprive us of our civil rights to be rammed through at any cost.

The $3.5 trillion isn’t about helping the poor or saving the planet. It’s about giving the Biden administration and the men behind it the power to spy on us and control our lives. It’s about tracking our spending, not theirs, our car mileage, not theirs, while they no doubt have found plenty of ways to get even richer from the $3.5 trillion in tax dollars being stolen from us.

They’ve only been able to get away with it for this long because they rely on front groups to do their dirty work, because there are always angry teens and unstable adults who have broken lives and are full of misdirected rage who are happy to act as activists for any radical cause.

Most Americans don’t know and the media won’t report who is really behind the activists.