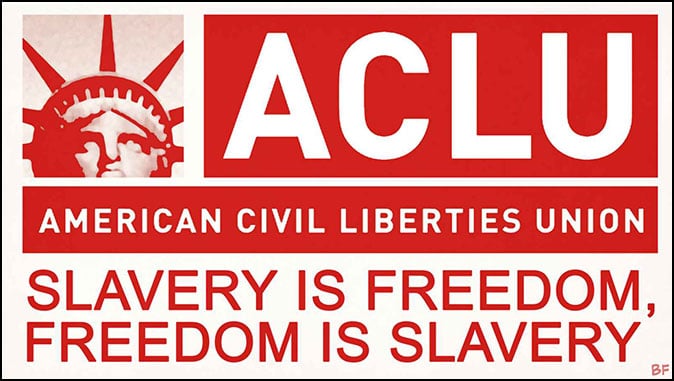 The ACLU Goes To War Against Pandemic Civil Rights
After fighting for civil rights, it discovered that fighting against civil rights pays better.
By Daniel Greenfield

Six years ago, the ACLU challenged a school vaccine mandate bill in California.

COVID-19 was only a gleam in the eye of some Wuhan University of Virology lab workers, if even that, and the vaccines in question were the more ordinary kind most children have.

Even so, the ACLU argued that children have a right to a public education and can’t be barred from school based on whether they’re vaccinated or not. The civil rights groups also questioned the idea that the state has a “compelling interest” in requiring vaccinations.

America has changed since and so has the ACLU.

The ACLU tries to disguise its radical shift by wrapping it in identity politics and contending that forcing people to get vaccinated protects “the most vulnerable among us, including people with disabilities and fragile immune systems, children too young to be vaccinated and communities of color hit hard by the disease.”

But young black men, the group that the ACLU had claimed to be advocating for last year, are the most likely to be fired or segregated due to vaccine mandates.

The ACLU wants to protect black people by taking away their civil rights.

But the ACLU isn’t just turning civil liberties on its head, it’s contradicting its own positions.

In 2002, the ACLU had opposed mandatory smallpox vaccinations of first responders during a pandemic. It further warned that employees who refuse to be vaccinated should be protected from retaliation.

“Smallpox vaccine has risks and getting vaccinated is not a choice to be made lightly — but in America, it should certainly be a choice,” the ACLU’s Technology and Liberty director had argued.

The ACLU had even produced an entire Pandemic Preparedness pamphlet which warned against a public health model that “assumes that we must trade liberty for security” resulting in “pandemic prevention” that takes “aggressive, coercive actions against those who are sick.”

The pamphlet further warned that “the CDC’s plan would have set us back even further. It applied its penalties to people who did not have any contagious disease and to people who would never expose anyone else to disease. Moreover, it included provisions to make all public health personnel, and those acting under their orders, immune from liability for any injury—even if forced vaccination or other mandated treatments killed the patient.” Who would have thought?

After a long history of opposing forced treatment and coercive medical measures, including mandatory swine flu vaccines for health care workers in New York, and flu shots and HPV vaccines for children in Rhode Island, the ACLU is completely on board with vaccine mandates.

And, indeed, the ACLU is suing states who ban schools from forcing children to wear masks.

There is a surreal hypocrisy in the ACLU abandoning all its old beliefs to argue that “rights are not absolute” and that there are “justifiable intrusion(s) on autonomy and bodily integrity” for the public good.

The ACLU hasn’t discovered some exciting new legal principle to justify its switch.

It was fighting the threat of possible smallpox vaccine mandates under the Bush administration because, as everyone at the ACLU understood at the time, Bush was the new Hitler. It fought childhood vaccine mandates because many of the concerned mothers were ACLU liberals.

But beyond the political shifts, the ACLU has largely discarded any interest in civil rights as a legal theory to become another interchangeable leftist pressure group with lawyers. The New York Times op-ed is the work of people who can’t even be bothered to define civil rights, but who understand that their donor base is currently agitated about pandemic identity politics.

And the ACLU has to show that it’s fighting their cultural enemies and destroying them.

The old ACLU won respect because it stuck to its principles, defending Nazis and other evil people to show that a free society could work as long as civil liberties were protected. All of that has long since gone out the window and the ACLU’s endorsement of vaccine mandates is long overdue as part of its shift from principled liberalism to unprincipled lawfare culture wars.

If it doesn’t fundraise off forcing children to wear masks and young black men to get vaccinated, the ACLU’s leadership understands that some other leftist organization will beat it to the punch.

It’s hard to have legal principles when you have no principles of any other kind.

And yet the old ACLU’s arguments about the dangers of criminalizing disease made a good deal of sense. That was the same organization that wisely warned against making people, instead of the disease, into the enemy.

That is exactly what leftists have done, dividing Americans, instead of uniting them.

But the ACLU knows quite well that there’s a lot more money to be made on division than there is on arguing for general principles and rights that apply to everyone across the board.

That was six times its annual donation total.

The ACLU looked at that river of resistance cash, dived in like a petty criminal who suddenly realizes that he could be raking in millions instead of thousands, and never looked back.

“To some degree, civil rights and civil liberties is a cyclical business,” the ACLU’s national legal director who authored the pro-vaccine mandate op-ed, argued. “We need to convince people that is a long-term business.”

There was a time when the ACLU wasn’t any kind of business. Now, like the Southern Poverty Law Center, it’s in the civil rights business and that’s the business of selling out rights for cash.

Before it defended vaccine mandates as taking away civil liberties from some to protect others, it was defending speech bans that would protect “marginalized groups”.

Within a few years, the ACLU had gone from championing free speech to balancing the “impact of the proposed speech and the impact of its suppression.”

After an entire history of arguing that larger problems don’t justify the abolition of individual civil liberties, the ACLU now contends that abolishing the liberties of individuals actually protects collective welfare when there is some sort of general crisis like a pandemic or hurt feelings.

Except it doesn’t like the word, “liberty”, it prefers the ambiguity of “rights” which can be things that the government and corporations seek to protect you from for your own good.

Orwellian arguments are on point for a civil rights organization co-founded by a Communist sympathizer who had argued that “If I aid the reactionaries to get free speech” it was only to create a Communist dictatorship and when that dictatorship is “achieved, as it has been only in the Soviet Union, I am for maintaining it by any means whatever.” And after a long career of civil liberties, the ACLU has come around to the position of “maintaining it by any means whatever.”

And it also gets to pig out on the much larger sums of money from the “maintainers” of tyranny.

But there isn’t even the pretense anymore that the resistance is to President Trump or to some authority. Even the ACLU’s mask mandates were disguised as attacks on Republican governors. But arguing for a vaccine mandate isn’t a resistance to authority, it’s authority.