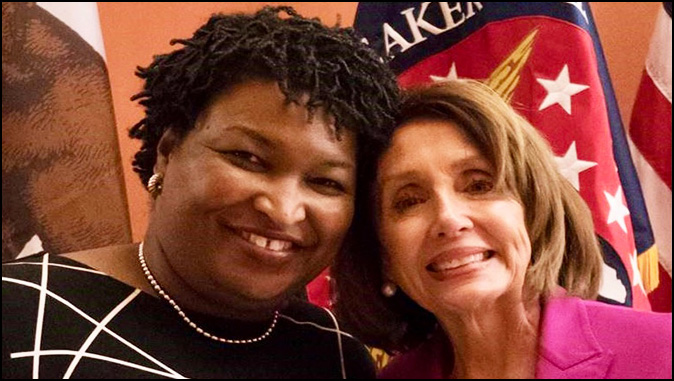 After the Supreme Court struck down Roe v. Wade, Democrats lost no time in insisting, all evidence to the contrary, that abortion would swing the midterm elections for them.

Georgia shows why abortion might abort their party instead.

Stacey Abrams, after months of dodging and refusing to be pinned down on her abortion views, finally came out and said that, “my intention is going to be to pass legislation that says a woman has the right to an abortion. And that right continues until a physician determines the fetus is viable outside of the body, except in the case of protecting the woman’s life or health.”

After all the ducking and weaving, Abrams effectively supports full abortion until the third trimester. That’s a radical position, but still more moderate than the current Dem one.

As recently as 2006, Biden had said, “I do not view abortion as a choice and a right. I think it’s always a tragedy.” Now, Biden called the Supreme Court’s Dobbs ruling a “tragic error”.

Support for abortion until the moment of birth has become routine among party leaders, but Abrams herself apparently did not support abortion until she first ran for office in 2006.

“I was very much on the side of anti-abortion, through much of my upbringing. I grew up in Mississippi, in a very religious family, in a religious community,” Stacey Abrams told CNN.

In 2014, historically black protestants in Georgia were split on the question of abortion. That split, like Abrams’ religious background, has all but disappeared.

“With the protections of Roe gone, the midterm elections in Georgia have become a referendum on reproductive freedom,” Nikema Williams, the Georgia Democratic Party chair, declared.

But there’s little evidence that the public cares. Georgia voters were split on abortion in 2019.

Rep. Henry Cuellar, the last pro-life Democrat, survived a challenge from the abortion lobby in Texas even though Jessica Cisneros, the leftist running against him, outraised him by a million dollars and was backed by Bernie Sanders, AOC, and Elizabeth Warren, along with NARAL, Planned Parenthood’s PAC, and EMILY’s List. Making abortion into a litmus test backfired.

A recent Axios poll found that first-generation Latino immigrants are the most skeptical on abortion with only 41% supporting legal abortion. And only 29% of Latinos who speak Spanish at home agreed. These numbers are a warning that what plays well at D.C. marches doesn’t necessarily work with sizable chunks of the increasingly fragmented Democrat-Left coalition.

2006, when Biden still played at being pro-life and Stacey Abrams decided to let her abortion flag fly. was a key year in the fatal Democratic pivot away from even the pretense of moderation on abortion. Senator Bob Casey Jr, who ran as a pro-life candidate in 2006, and insisted that he was “pro-life” and claimed to oppose Roe despite voting with Planned Parenthood most of the time, now announced that he would vote to turn Roe v. Wade into law.

Some called this “the end of the pro-life Democrat”, but Casey just redefined pro-life to mean pro-abortion. “I think it’s clear to most people that the description of pro-life Democrat is accurate,” the Senate Democrat from Pennsylvania put it, by which he now meant trying “to reduce both the number of abortions and the number of unwanted pregnancies”.

Bill Clinton’s call that abortion should be “safe, legal, and rare” had been displaced by a 2020 presidential field of radical candidates who almost universally supported government funding of abortion by repealing the Hyde Amendment and having Medicaid cover abortions. Nine of the presidential candidates, including Kamala Harris, Bernie Sanders and Elizabeth Warren, wanted to force states to get federal pre-clearance for abortion laws.

After a generation of playing it safe, Democrats are all in on abortion radicalism.

Schumer’s Senate abortion bill would have legalized late term abortion until birth, but the show vote couldn’t even get to 50 votes.

“Republicans in Congress — not one of whom voted for this bill — have chosen to stand in the way of Americans’ rights,” Biden insisted afterward. “To protect the right to choose, voters need to elect more pro-choice senators this November, and return a pro-choice majority to the House.”

Only 15% of likely voters see abortion as a top priority. And few think of it as something to be proud of. Democrats have embraced abortion as an assertion of feminism. Pro-abortion protesters kick around bibles, taunt pro-life protesters by praising the devil, and smear blood on themselves. That may play well on campus, but it just further alienates elements of the Democrat coalition.

Democrats want to make 2022 into an abortion referendum, but they may not like the results.

Kamala Harris has added to her extensive portfolio by becoming the point woman for the White House abortion response. “The rights of all Americans are at risk. This is the time to fight for women and our country with everything we have,” she declared.

The mingled stench of radicalism and electoral desperation isn’t hard to smell here.

With a bad economy and uncontrollable inflation, Democrats want 2022 to be about anything else, especially social and cultural issues intended to rally their base in the midterms. But abortion isn’t and has never been a winning strategy. And that’s even when people can afford to drive.

Or buy food to feed their families.

Planned Parenthood’s tarnished saint, Margaret Sanger, explicitly focused her murderous efforts on poor women from immigrant groups that were in disavor at the time, Italians and Jews. Her alliance with eugenicists has been the abortion industry’s most awkward and worst kept secret.

Sanger’s radical sainthood has been revoked and the abortion lobby is eager to dress up its movement with black women, like Stacey Abrams, who recanted their pro-life upbringing.

Abortion is big business, economically and politically, fueling a surge of donations from wealthy blue state women who support abortion and want poor women to be the ones to kill their children. Democrats have turned abortion into a culture war issue partly to profit from that cash.

But abortion also alienates many of the minorities who are its natural eugenic targets.

The Democrats want the midterms to be about the vital importance of taking money from rich white people to kill poor black babies. That may not be the winning strategy they think it is.