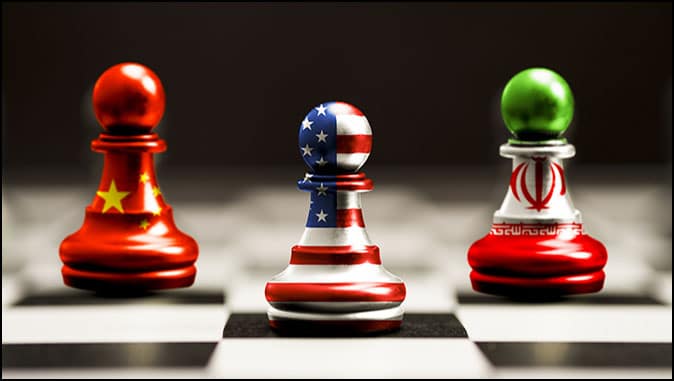 The ruling mullahs of Iran are strengthening their ties with the Chinese Communist Party as well as conveniently violating US sanctions without facing any repercussions from the Biden administration.

“At the start of New Year 2022, I am very pleased to visit China on my first official visit as foreign minister. Mr. Wang Yi, China’s State Councilor and Foreign Minister, and I reached an important consensus in the beautiful city of Wuxi, Jiangu Province, over a wide variety of topics ranging from the Comprehensive Partnership Program to consultations on the Vienna talks… Simultaneously with the talks in China, we had prepared the groundwork for announcing today the day of the start of the implementation of the comprehensive agreement on strategic cooperation between the two countries.”

The plan that the Chinese and Iranian leaders are referring to is linked to a 25-year deal reached between Tehran and Beijing in March 2021; it now enters the stage of its implementation.

According to the agreement, China will continue to import oil from Iran in spite of US sanctions. According to the Tehran Times: “For his part, the Chinese foreign minister approved of his Iranian counterpart’s views expounded in his op-ed published in China’s Global Times. Wang said that the Iranian foreign minister’s views show the promising horizon in relations between Tehran and Beijing. China’s leading diplomat underlined his country’s readiness to expand cooperation with Iran in financing, energy, banking and cultural sectors despite” the US sanctions.

The agreement grants China significant rights over the Iran’s resources and help to Iran in increasing its oil and gas production. Leaked information showed that one of its terms is that China will be investing nearly $400 billion in Iran’s oil, gas and petrochemicals industries. In return, China will get priority to bid on any new project in Iran that is linked to these sectors. China will also be able to pay in any currency it chooses.

The partnership is not only going to assist the Iranian regime to skirt US sanctions, it also enables Iran to gain access to funds, empower its militia and terror groups in the region and continue advancing its nuclear weapons program.

China, when it was recently asked to cut its imports of Iranian oil according to the US sanctions, brushed off the Biden administration. Beijing is most likely aware that the Biden administration will not be taking any tangible actions against either China or Iran. China anyhow, despite the sanctions, has been buying a record amount of oil from Iran and Venezuela. By comparison, during the Trump administration, China’s oil imports from Iran had reached their lowest level.

The agreement between China and Iran, defying and challenging the US, also has a military dimension. Iran’s armed forces are currently holding a joint naval exercise with China and Russia. Iran, posing a threat to the region and the United States, will also, in all probability, step up its acquisition of advanced weaponry and nuclear technology from China.

China, for its part, will be deploying 5,000 members of its security forces on the ground in Iran. As the largest importer of Iranian oil, China will also have authority over Iran’s islands, gain access to the oil at a highly discounted rate and increase its presence and influence in almost every sector of Iranian industry, including telecommunications, energy, ports, railways, and banking.

Iran also, after many years of trying, has become a full member of the Shanghai Cooperation Organisation (SCO). In September 2021, the SCO — despite the Financial Action Task Force global financial watchdog having placed Tehran on its terrorism financing blacklist — agreed to elevate Iran’s status from observer to full member.

The real horror, as China and Iran’s military and strategic partnership intensifies, is that the Biden administration’s reluctance to take a firm stand against the mullahs and Beijing — as with Afghanistan and now Ukraine — can only have incalculably severe repercussions for the national security interests of the US and its allies, who may feel the need to start “hedging their bets” and seeking out presumably more reliable protectors, who may not have our best interests at heart.