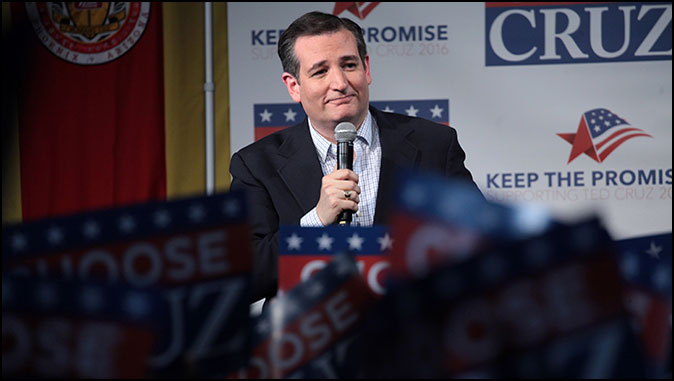 Ted Cruz: If Republicans Take Back the House, Biden Could Be Impeached
If we get some elected officials with spines, watch the fireworks.
By Robert Spencer

Sen. Ted Cruz (R-Texas) said on Friday’s episode of his podcast, “Verdict with Ted Cruz,” that there would be “multiple grounds” to impeach Old Joe Biden if the Republicans take back the House in 2022.

“If we take the House,” Cruz said, “if we take the House, which I said is overwhelmingly likely, then I think we will see serious investigations of the Biden administration.” Those investigations could lead to impeachment: “whether it’s justified or not, the Democrats weaponized impeachment. They used it for partisan purposes to go after Trump because they disagreed with him. One of the real disadvantages of doing that is the more you weaponize it and turn it into a partisan cudgel, you know what’s good for the goose is good for the gander.”

That’s true. The Constitution states that “the President, Vice President and all civil Officers of the United States, shall be removed from Office on Impeachment for, and Conviction of, Treason, Bribery, or other high Crimes and Misdemeanors.” It is unwise and a sign of the degeneration of our political system into a cesspool of corruption and influence-peddling that the Democrats have weaponized impeachment proceedings against Republican presidents who have not remotely committed treason, bribery, or any other high crimes and misdemeanors. If the Republicans descend to the same level instead of continuing their usual spinelessness and me-tooism, on one level it would be refreshing to see them fight back against the authoritarian Left, but it would also indicate a further erosion of the mutual respect upon which our political system has been based up until recent decades.

Cruz, however, sees grounds to impeach Old Joe that aren’t just partisan vindictiveness. “I think there will be enormous pressure on a Republican House to begin impeachment proceedings,” he observed correctly, adding: “I think there are potentially multiple grounds to consider for impeachment. Probably the most compelling is the utter lawlessness is President Biden to enforce the border. His decision to just defy immigration laws. That’s probably the strongest grounds right now for impeachment but there may be others.”

Cruz has a good point. Leaving the Southern border open for all manner of criminals, including jihad terrorists, can easily be seen as treason, which is generally defined as giving aid and comfort to the enemy. There is no denying the fact that the enemies of the United States are gaining aid and comfort from our essentially nonexistent Southern border, as it gives them easy entrée into the country with little worry that their activities to subvert and ultimately destroy the United States will be impeded.

The same could be said of Biden’s handlers’ policy toward Iran, particularly its willingness to remove sanctions on the Islamic Republic and reenter the Iranian nuclear deal. Obama sent billions in cash to the Iranians while they were chanting “Death to America”; was that not giving aid and comfort to the enemy? Wouldn’t Biden’s friendly and generous posture toward a rogue state that has made no secret of its determination to destroy both the United States and Israel also count as treason? Would the Republicans dare to explore that territory?

Then there’s bribery. Does anyone really think that art connoisseurs have so much respect for the artwork of Hunter Biden that they’re willing to shell out top dollar to own one of his creations? For that matter, does anyone really think that a Ukrainian natural gas company would give a crack-smoking ne’er-do-well with no experience in the industry a highly lucrative position without any regard at all for the fact that his father was at that time the vice president of the United States?

Biden should indeed be investigated, impeached, and removed from office if convicted. However, if any such proceedings were begun in a Republican House in 2023, the establishment media that so avidly reported on the Russian collusion hoax and the Ukrainian phone call hysteria would accuse the leaders of the investigation of base partisanship and do all it could to shut down and/or discredit the investigation before it even got off the ground. And the Republican leadership, if it is as spineless or compromised as it is now, would quietly acquiesce.

If, on the other hand, we get some elected officials with spines by then, sit back and watch the fireworks.