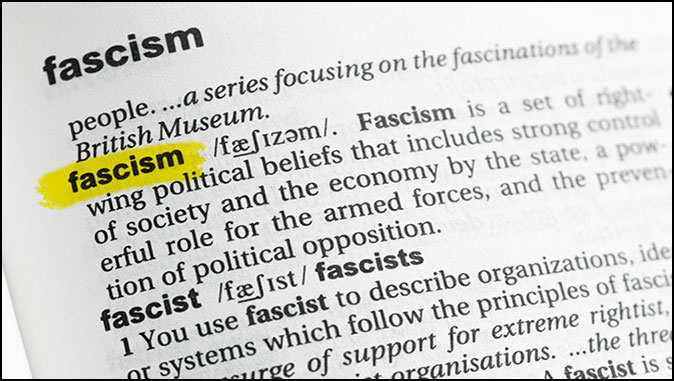 A government-school teacher in California is under fire after being exposed teaching his child victims to associate fascism with Christianity, the Republican Party, European ancestry, heterosexuality, and other characteristics or identities.

The scandalous tax-funded indoctrination, first exposed by the Washington Examiner based on photos and testimony from a student in the class, took place in San Diego’s Madison High School. Critics expressed concerns that the propaganda could lead to radicalization and even violent extremism.

In a picture taken by the student whistleblower, the word fascism appears underlined at the top of the board. Underneath that, the English teacher put down terms such as “Trump,” “heterosexual,” “White,” “Christian,” and more.

“He goes on to insult white people and Christian people, automatically putting them under…that they’re automatically fascist,” the student was quoted as saying by the Examiner, which withheld his identity over concerns of retaliation by the teacher or school.

The GOP, too, was targeted, alongside the National Socialist (Nazi) party of Adolf Hitler. “As it is currently constituted, the Republican party is now a fascist organization that no longer fits the category of a conventional Democratic party,” the teacher wrote on the board, photographs show.

According to the student, who took the photos that were published in the media, the incendiary and hateful propaganda was dished out in an English class on August 29 of this year. It happened during a lesson on how to write an “argumentative essay.”

“This completely caught me off guard,” the student was quoted as saying. “This is an English class. This isn’t a political class or anything. I signed up for the class to learn how to write papers and stuff…I didn’t sign up for the class for a teacher to be trying to shove his ideology down my throat.”

The division of Americans by race and other characteristics is a hallmark of Critical Race Theory, a Marxist tool to divide and conquer the nation similar to how class divisions were used in other nations. The addition of Christians and heterosexuals to the “oppressor” class was easy to predict.

In Communist China, Mao’s mass-murdering butchers divided Chinese people into black and red camps. Black class members — business owners, land owners, Christians, and others — were painted as the oppressors. The Red class, meanwhile, was composed of “oppressed” peasants and workers.

Ironically, National Socialism, better known as Nazism, has much in common with the totalitarian beliefs of the progressive movement in America. From an all-powerful state and government partnership with business to the war on free speech, the parallels are clear and ominous.

Similar propaganda is being fiendishly pumped into the minds and hearts of impressionable young Americans from coast to coast — and has been for generations. As the nation implodes amid hate and ignorance, the fruit is now becoming obvious. America will not survive another generation of this.

This article was originally published by Freedom Project Media.