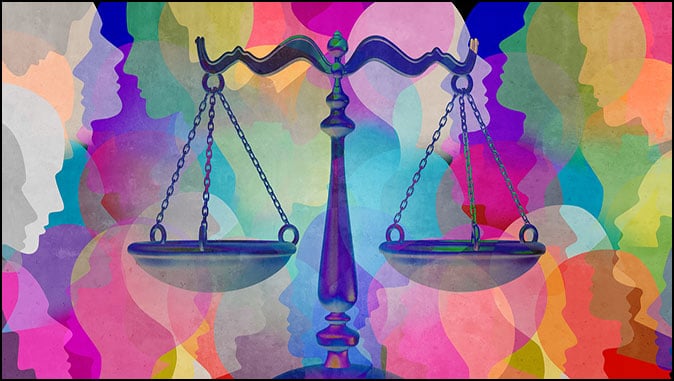 Systemic Social Justice Activism on College Campuses
The perversion of the very purpose of universities.
By Jay Bergman

Amidst considerable fanfare, Central Connecticut State University (CCSU) announced recently the creation of the John Lewis Institute for Social Justice. In a formal statement marking the occasion, Zulma Toro, the president of CCSU, claimed that the university’s mission was “to prepare students to be thoughtful, responsible, and successful citizens.”

At first glance, this objective seems incontestable, and the advocacy of social justice an excellent means of achieving it.

But when one delves deeper into the purpose of the institute, and learns what exactly social justice means to those who established it, it becomes clear that the institute is a vehicle for turning students into political activists advancing left-wing causes: the next sentence in the president’s statement acknowledges that the institute was created to satisfy students’ desire “to become more informed and involved in social justice initiatives after the killings of George Floyd and Breonna Taylor.”

That in the absence of any juridical determination one would describe these two deaths as “killings” is consistent with the common misconception that white police are generically racist and kill black Americans in large numbers because of their skin color. The truth is the exact opposite: according to Peter Kirsanow, a member of the United States Commission on Civil Rights, in 2016 police shot to death 16 unarmed black victims and 22 unarmed white victims – while in the same year making 408,873 arrests for violent crime.

The same disparity between perception and reality applies to the larger indictment of America that the creators of the institute apparently share: that our country is “systemically” racist, and absent the intervention of social justice activists like those the institute seeks to generate, irredeemably so.

Virtually every institution in America is committed today to achieving a “diverse” work force, in which diversity is defined not on the basis of the attributes, experiences, and abilities of individual applicants, but by their membership in collective entities based on race and ethnicity.

Indeed, through reverse discrimination euphemistically valorized as “affirmative action,” the whites who head these institutions are today metaphorically turning somersaults in seeking “underrepresented minorities” for their corporate boards. And they are doing so not because the laws of our country require it, but because they consider giving preferences based on race tangible proof of their moral virtue.

In short, the political activism the John Lewis Institute seeks to foster is based on assumptions about America that are unwarranted. But one should not infer from this that redirecting this activism to other, more defensible causes than eradicating racism that in America is virtually non-existent would justify the institute’s continuation.

Rather, it is the very existence of the institute that is sufficient cause for its abolition.

Colleges and universities do not exist to further a political agenda, no matter how virtuous or progressive or socially useful it may appear to be at any particular time. The conventional wisdom, like fashions in clothing, is impermanent, and often reflective of sentiments grounded not in reason but in collective hysteria — like current claims that objectivity, individualism, and getting the right answer in mathematics are somehow racist and expressive of “white supremacy.”

Higher education is different from politics. Its purpose, which transcends time and place, is simply to educate: to expose students to what the nineteenth-century British poet and cultural critic, Matthew Arnold, famously termed “the best that has been thought and said.”

Only after having been steeped in the timeless insights history, literature, and the sciences reveal about the human condition can one truly claim to be “liberally educated,” and thereafter partake in the majestic rituals of citizenship President Toro cites in her statement.

One might even suggest that every hour of students’ time that is directed to political engagement is one less hour devoted to honing the analytical skills and acquiring the factual knowledge on which informed participation in politics in America depends.

Regrettably, this is already the case at CCSU, where students must take one course, under the general rubric of “social justice,” on such obviously politicized topics as “liberation and oppression,” “race and racism,” and “dimensions of diversity and inequality.”

Surely this perversion of the very purpose of the university is reason enough for the taxpayers who pay the salaries of faculty who foist this kind of propaganda on unsuspecting students to demand that the legislators representing them exercise their proper oversight. The political indoctrination of students not only at CCSU but at other universities in Connecticut and around the country must end.

Jay Bergman is Professor of History at Central Connecticut State University and serves on the Board of Directors of the National Association of Scholars, an organization committed to academic freedom.