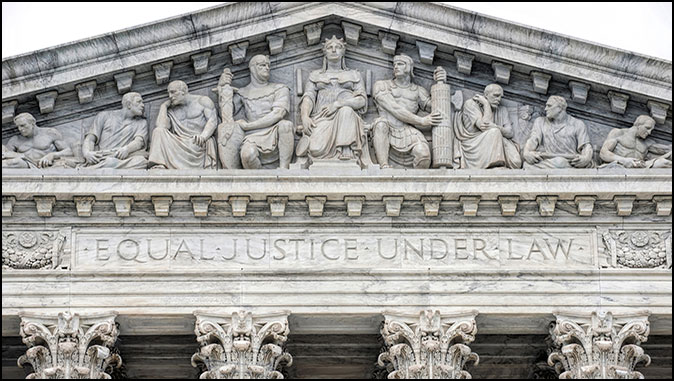 Power hungry governors like Democrat New York Governor Andrew Cuomo have been using the COVID-19 pandemic as an excuse to trample on the constitutional right of the faithful to gather and pray together at their places of worship. The Supreme Court majority was not willing to write the governors and other government officials such a blank check. The First Amendment’s protection of the free exercise of religion is now out of intensive care, thanks to a 5-4 Supreme Court ruling last Wednesday night. This outcome would not have been possible but for Justice Amy Coney Barrett’s ascension to the Supreme Court in place of the late Justice Ruth Bader Ginsburg, who passed away in September.

Governor Cuomo believes that his edicts limiting group worship by the residents of New York State during the COVID-19 emergency transcend the residents’ religious liberties. This is the same governor whose March emergency advisory directing nursing homes in New York State to accept elderly hospital patients infected with the coronavirus was reportedly responsible for many needless nursing home deaths. Religious organizations in New York were not willing to accept Cuomo’s emergency decree against religious liberty.

Catholic and orthodox Jewish organizations separately challenged Cuomo’s severe restrictions limiting the number of attendees at religious services in geographical zones classified as “red” or “orange” to reflect the higher levels of coronavirus infections in those areas. The restrictions on places of worship, which limited services to just 10 and 25 occupants for red and orange zones, respectively, were far more stringent than restrictions imposed in those zones on secular businesses that Cuomo and his cadre of experts deemed “essential.”

The Supreme Court majority considered both cases together and enjoined the enforcement of Cuomo’s executive order pending appellate review of a lower court ruling that had dismissed the challenge to the order. The majority opinion, which was unsigned, did more than just put a temporary hold on the enforcement of Cuomo’s executive order for procedural reasons. That could have been done in a couple of sentences. Instead, the opinion expounded at length on the strict standard that the majority would apply in determining what restrictions, if any, on freedom of worship were justified, even during a once-in-a-century pandemic.

Hotels, bike repair shops, liquor stores and acupuncture facilities are examples of secular entities that Cuomo’s executive orders regard as providing “essential” services. Places of worship did not qualify for inclusion on Cuomo’s list of essential entities, however, even though the gathering of congregants for religious services is inherent to the exercise of freedom of religion guaranteed by the First Amendment. The practical effect is that in a red zone, for example, a synagogue or church may not admit more than 10 persons because they are not considered providers of “essential” services, while the businesses Cuomo decided are “essential” may admit as many people as they wish. This is invidious discrimination against people of faith seeking to worship with their fellow congregants.

“Members of this Court are not public health experts, and we should respect the judgment of those with special expertise and responsibility in this area,” the majority ruling declared. “But even in a pandemic, the Constitution cannot be put away and forgotten. The restrictions at issue here, by effectively barring many from attending religious services, strike at the very heart of the First Amendment’s guarantee of religious liberty. Before allowing this to occur, we have a duty to conduct a serious examination of the need for such a drastic measure.”

The majority could have deferred review of the underlying constitutional issues, as Chief Justice John Roberts suggested in his dissenting opinion. Earlier this year, Roberts had joined Justice Ginsburg and the other three liberal justices to form the majority that then upheld church attendance restrictions in California and Nevada. Now, with Justice Barrett on the Supreme Court in place of Justice Ginsburg, the tide has turned. The earlier decisions have been effectively superseded. A rock-solid majority of constitutionalist justices has restored the primacy of religious freedom.

Roberts asserted in this case that, since Cuomo had previously withdrawn his contested order because health conditions had improved in the affected zones, there was no need for the Supreme Court to take up the case at this time. The new majority disagreed. They were understandably concerned that Cuomo could restore the more restrictive classifications without prior notice, which “will almost certainly bar individuals in the affected area from attending services before judicial relief can be obtained.”

The majority opinion observed that there was no evidence that the places of worship had contributed to the spread of COVID–19. They had stricter health safety protocols in place than the state required. Moreover, as the majority opinion stated, there were “many other less restrictive rules that could be adopted to minimize the risk to those attending religious services. Among other things, the maximum attendance at a religious service could be tied to the size of the church or synagogue.”

Justice Neil Gorsuch wrote a strong concurring opinion in which he stressed that “Government is not free to disregard the First Amendment in times of crisis.” He declared that the First Amendment “prohibits government officials from treating religious exercises worse than comparable secular activities, unless they are pursuing a compelling interest and using the least restrictive means available. … Yet recently, during the COVID pandemic, certain States seem to hav

Justice Gorsuch observed critically that, in Governor Cuomo’s judgment, “laundry and liquor, travel and tools, are all ‘essential’ while traditional religious exercises are not. That is exactly the kind of discrimination the First Amendment forbids.” He added, “It is time — past time — to make plain that, while the pandemic poses many grave challenges, there is no world in which the Constitution tolerates color-coded executive edicts that reopen liquor stores and bike shops but shutter churches, synagogues and mosques.”

With a barb evidently aimed at Chief Justice Roberts for displaying “a particular judicial impulse to stay out of the way in times of crisis,” Justice Gorsuch warned that “we may not shelter in place when the Constitution is under attack. Things never go well when we do.”

Justice Sonia Sotomayor wrote a dissenting opinion, which Justice Elena Kagan joined, in which she tried to knock down the majority’s argument that places of worship were being unfairly targeted by Cuomo’s edicts as compared to some secular businesses. Sotomayor wrote that such disparate treatment was justified, based on the opinions of New York’s health experts. Sotomayor cited these experts in concluding that, unlike religious services, such businesses “do not feature customers gathering inside to sing and speak together for an hour or more at a time.”

Sotomayor did not let the facts get in the way of her relying entirely on the health experts’ theoretical justification for treating places of worship more harshly than some secular businesses. As the majority ruling pointed out, the religious institutions represented “without contradiction that they have complied with all public health guidance, have implemented additional precautionary measures, and have operated at 25% or 33% capacity for months without a single outbreak.” Sotomayor also failed to explain why less restrictive rules could not have been tried first to minimize the risk to those attending religious services, rather than imposing an arbitrary numerical cap regardless of the size of the place of worship.

Finally, Sotomayor argued that religious institutions received more favorable treatment under Cuomo’s executive orders than some secular institutions such as theaters and concert halls, which had to close entirely. But this is a false equivalence. The places of worship are not asking for a special exception to host a Broadway play or a New York Philharmonic concert at their premises. The churches and synagogues simply want their congregants seeking to pray inside their places of worship to be treated no less favorably than customers browsing or transacting business inside secular establishments that Cuomo deems to be “essential.”

Cuomo dismissed the Supreme Court ruling as “irrelevant” because he had already withdrawn the red/orange zone classifications at issue. He said that the Court’s majority, buttressed by the three justices nominated by President Trump, was simply using the case to make a statement about “its philosophy and politics.”

Cuomo is too blinded by his own ego and self-righteousness to realize that the majority was reminding him and other power-hungry government officials that the Free Exercise Clause of the First Amendment is still in force and not to be trifled with. It protects religious liberty and places of worship, not secular commercial businesses. The majority was not making an idle political or ideological statement, as Cuomo charged in his usual condescending manner. The constitutionalist justices were warning that they will rigorously review any attempt by government officials to interfere with religious freedom even in a health emergency.