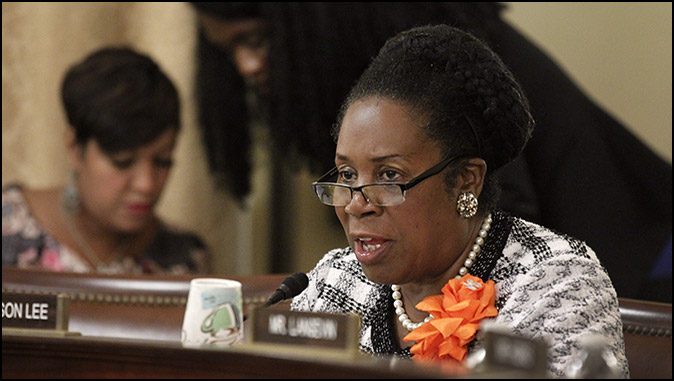 Sticks and Stones May Break My Bones, but Words Can Do That, Too, Says Sheila Jackson Lee
It all happened on MSNBC.
By Robert Spencer

On Nov. 8, Rep. Sheila Jackson Lee (D-Sticks and Stones) was elected to her fifteenth term in the House of Representatives with nearly 71% of the vote. That means that, come Jan. 2025, she will have served no less than thirty years in the House. Clearly, her constituents have an immense amount of confidence in her, and it’s no wonder. During her long and illustrious career in the House, Jackson Lee has consistently been a champion of the looniest ideas of the far Left, but on Friday she broke new ground. The respected congresswoman took the Left’s claim that speech dissenting from its agenda amounts to violence and ran with it all the way into full-on absurdity.

It all happened on (where else?) MSNBC. The hijinks began when Al Sharpton said to Jackson Lee: “I recall what you said about these other members of Congress that had used threatening and all kind of vile and really dangerous accusations against other members of Congress. I don’t remember Kevin McCarthy denouncing them, either. Not only did he not try to remove them; I don’t even remember his denouncing them. Did he?”

Yes, Al Sharpton, who trumpeted the Tawana Brawley hoax for years, falsely accusing an innocent man of rape, is now tut-tutting about “vile and dangerous accusations” that conservative members of Congress supposedly made and that Kevin McCarthy supposedly didn’t denounce.

Instead of saying something about people who live in glass houses being unwise to throw stones, however, Jackson Lee zeroed in on a different child’s adage, taking issue with the age-old dictum that “Sticks and stones may break my bones, but names will never hurt me.” Jackson Lee complained that while McCarthy “was trying to defend them in the public manner, he alleges that he spoke to them quietly in private. But that did nothing to the potential threat. And let me just say this, Reverend Sharpton, it is very well-documented that words nowadays can actually break your bones.”

We live in such an age of absurdity that “Reverend Sharpton” didn’t burst out laughing at that point. He didn’t ask Jackson Lee where all the victims are. Where are the hospitals filled with people who suffered serious injuries for being called a “Communist,” a “groomer,” or a “Biden supporter”? Sharpton likewise didn’t ask Jackson Lee if the bone-breaking words were solely in the possession of patriots, such that Leftists have no access to them. Has no one had his or her bones broken by being called an “insurrectionist,” an “election denier,” or a “white supremacist extremist”?

Jackson Lee tried to bring her claim back to earth a bit by referring to a February 2016 incident in which Donald Trump jokingly told his supporters to rough up Leftist protesters at one of his campaign rallies. Jackson Lee said: “Words have generated violence. We have seen that since the former President of the United States generated his first remark, ‘beat him up, I will pay for your lawyers.’” Trump was actually not yet president, and what he really said was “If you see somebody getting ready to throw a tomato, knock the crap out of them. I’ll pay the legal fees.”

While that was arguably incitement to violence, it is actually a very, very long way from the idea that “words nowadays can actually break your bones.” No one was injured when Trump said that. Everyone in the crowd was still free to make his or her own choice about whether or not to become violent.

Sheila Jackson Lee, however, would no doubt be impatient with such distinctions. She was pushing a view of the world that Leftists very much want you to accept: that even when those who dissent from the Left’s agenda don’t say anything that could possibly be construed as incitement, their words still amount to violence and consequently must be forcibly suppressed. But just imagine if her claim became widely accepted. The U.S. military, confronted with an existential threat, would label its foe a “racist” and get ready to count the casualties.

In fact, that seems to be the direction the military really is heading in. The Left lives in a fantasy world in which men are women (sometimes even four-star admirals), women are men, children are fully functioning adults, questioning the integrity of highly questionable elections is “insurrection,” and Joe Biden is a fully functioning president of the United States. Leftists are determined to impose these fantasies on the rest of us. If that means pretending that our words are violence and so must be silenced, so be it. If it means breaking our bones, they’re unlikely to rule that out, either.