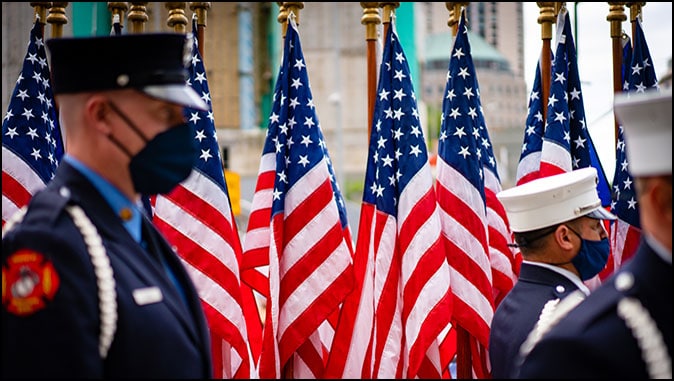 On Friday, September 10, 2021, the Philadelphia chapter of the Hamas-linked Council on American-Islamic Relations (CAIR) is presenting a panel discussion entitled “Remember Pearl Harbor to Never Forget 9/11: Teaching Japanese American and Muslim American Histories.” There in a nutshell is much of what has gone wrong in our nation’s response to the 9/11 jihad attacks, and why we are so drastically on the wrong path now.

The CAIR panel is as noteworthy for what it is not about than for what it is about. It is not about the victims of 9/11, the lives lost, the lives destroyed, the magnitude of human suffering that was inflicted. It is most certainly not about the ongoing global jihad: a useful panel could be held on groups that still exist around the world that hold to the same belief system, ideology and goals that the 9/11 plotters and hijackers held, and which are an ongoing threat to Americans and to all free people. Hamas-linked CAIR is never going to hold such a panel, and neither is anyone else.

Instead, CAIR, predictably enough, focuses on the people who hold the same beliefs as the jihad attackers of 9/11 and have, CAIR claims, been victimized and discriminated against in the United States as a result. Statistically speaking, such claims are wildly exaggerated. FBI hate crime statistics show that anti-Semitic hate crimes are far more common than attacks on Muslims, which actually dropped 42% in the last year. No hate crime is justified, but the idea that Muslims are living in fear of MAGA-hat-wearing redneck vigilantes in America is Leftist fantasy.

Nonetheless, that is not just the focus of this unsavory Hamas-linked group, but of the establishment media as well. The Los Angeles Times on Friday published a lengthy weeper entitled “Muslim youth in America: A generation shadowed by the aftermath of 9/11,” all about how some people say rude things to innocent Muslims just because some people did something way back two decades ago. The article begins: “On a rainy day during her sophomore year of high school, as Aissata Ba studied in the library, a photo popped into her phone. It showed a beheading by Islamic State militants, along with a caption in red letters: ‘Go back to your country.’” In the big bad, “Islamophobic” USA, the perpetrator of this horror got off scot-free: “Ba reported the incident. Administrators never tracked down the person who sent it.”

The Times explained how Muslims are the true victims of the 9/11 attacks: “Asked when they thought such incidents became common, the Ba family didn’t hesitate. ‘It started with 9/11,’ said Ba’s mom, Zeinebou, who immigrated to Chicago in 1999. That day in 2001 caused a chain of tragedies — for the nearly 3,000 people who perished during the attacks in New York, at the Pentagon and in Pennsylvania; for the young men and women who died serving their country in the wars that followed; and for Muslims, and those perceived as Muslim, who became targets of hate.”

It would be much easier to sympathize with all this if not for the fact that since 9/11, CAIR and its allied groups, with eager help from the establishment media, have insisted that any honest investigation of the motivating ideology behind the attacks, and jihad terror in general, constituted “hate.” Then there are the numerous fake anti-Muslim hate crimes, fabricated apparently in order to buttress the claim that Muslims are uniquely harassed and victimized in the United States. The facts don’t bear out this claim.

The LA Times was not alone, of course. The Associated Press came out with its own Muslims-Are-Victims 9/11 story on Tuesday: “Two decades after 9/11, Muslim Americans still fighting bias.” It opened with another unsubstantiated anecdote that, as all such anecdotes do, revealed more than it intended: “A car passed, the driver’s window rolled down and the man spat an epithet at two little girls wearing their hijabs: ‘Terrorist!’ It was 2001, mere weeks after the twin towers at the World Trade Center fell, and 10-year-old Shahana Hanif and her younger sister were walking to the local mosque from their Brooklyn home. Unsure, afraid, the girls ran. As the 20th anniversary of the Sept. 11 terror attacks approaches, Hanif can still recall the shock of the moment, her confusion over how anyone could look at her, a child, and see a threat. ‘It’s not a nice, kind word. It means violence, it means dangerous. It is meant to shock whoever … is on the receiving end of it,’ she says.”

If that really happened, it’s a shame, but the fact that both the LA Times and AP had to lead with stories of people saying rude things to Muslims unwittingly reveals that they didn’t have anything worse to head up their stories: no stories of Muslims being attacked, of mosques being burnt down, of laws targeting Muslims in the United States and denying them basic rights. Nor should there be such stories. But the fact that there aren’t any gives the lie to the entire establishment narrative.

Meanwhile, SiriusXM host and frequent CNN contributor Dean Obeidallah wrote at CNN on Monday: “On September 10, 2001, I went to sleep a White guy. On September 11, I woke up an Arab.” This happened, you see, because after 9/11, people began to regard poor Dean as a member of a group that he says has been “demonized and hated by many of our fellow Americans — simply because we shared the same ethnic background, and in some cases religion, as the 9/11 terrorists.” The irony of his writing this for one of the world’s foremost media outlets, which frequently showcases his work, appears to have been lost on him.

The reality is much different from what these stories suggest. Newsweek recently noted that “as the 20th anniversary of September 11 approaches, the recent rise of many Muslim Americans to positions of power and influence—in Washington and in statehouses, on big screens and small ones, across playing fields and news desks—is a development that few in the U.S. would have predicted two decades ago, Muslims included.”

Meanwhile, opponents of jihad violence and Sharia oppression of women have genuinely experienced the marginalization that Obeidallah claims to have suffered. They have been defamed by the Southern Poverty Law Center, targeted by the social media giants’ Global Internet Forum to Counter Terrorism, and shunned by the establishment media.

In all this I haven’t even mentioned the misbegotten misadventures in Iraq and Afghanistan, or the U.S. government’s adamantine determination to ignore and deny the ideological wellsprings of the global jihad. But it all works together: the lesson most Americans will be told on Saturday is that twenty years ago, some “extremists,” akin to the January 6 “insurrectionists,” hijacked the peaceful religion of Islam, and since then Muslims have been victimized. The moral of the story? We must end all remaining counterterror measures directed at stopping jihadis. They’re “Islamophobic,” and the real problem is “white supremacists,” anyway. What could possibly go wrong? Go back to sleep.