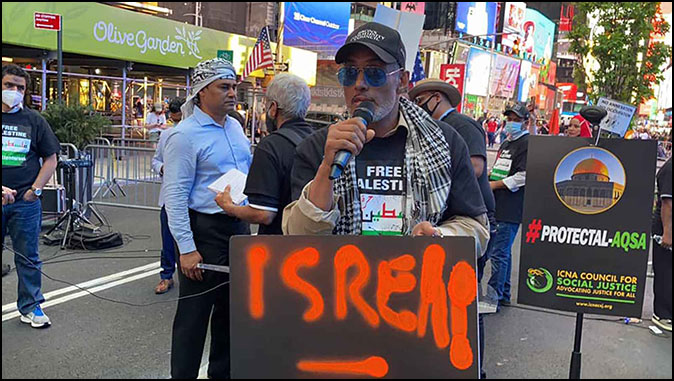 United States Senator Charles Schumer and New York City Comptroller Scott Stringer are two politicians who, time and time again, offer strong declarations of support for Israel. At pro-Israel events, they exploit their Jewish backgrounds to burn into their constituents’ minds that they are unflinching in their defense of the Jewish state. On occasion, their actions have mirrored their words, and they should be recognized for this. However, recently, the two have given signed commendations to ICNA, a group that conducts anti-Israel activities and is even linked to terrorism against Israel. This offense must not be ignored, and the praise must be rescinded.

“Chuck” Schumer, the Senate Majority Leader, is no stranger to the AIPAC Policy Conference held annually in Washington, DC; he has addressed many. At the 2010 Conference, he went as far as to tell the audience that his last name, Schumer – from the Hebrew term for “guardian” – was given to him, as if from G-d, Himself, to be a guardian over Israel. At the 2019 Conference, he declared, “I will always stand with Israel against those who would do her harm,” and he lamented that too many of the younger generation “don’t have the same understanding of the threats facing Israel…” Yet, it seems, the Senator lacks much of that understanding, as well.

Comptroller Stringer, who recently lost his bid to become Mayor, has also been outspoken in favor of Israel. He led a delegation to Israel in 2016, and he has denounced the BDS boycott movement as “anti-Semitic.” At a July 2014 pro-Israel rally, he emphatically told the audience, “[W]e need to back up Israel with our strong public opinion, making sure that there’s no excuse for you to be silent when it comes to protecting Israel against terrorists.” He further stated, “[I]f we can’t beat the terrorists and they win, shame on all of us.” Unfortunately, it appears that Comptroller Stringer does not feel the same about those associated with the terrorists.

ICNA or the Islamic Circle of North America is a radical Muslim group connected to South Asian terror. For over three decades, the group has harbored Ashrafuz Zaman Khan, a former death squad commander from the 1971 massacres that took place in what is now called Bangladesh, placing Khan in the highest of ICNA’s leadership positions. Moreover, as recently as December 2017, ICNA has promoted Lashkar e-Taiba (LeT), the group responsible for the November 2008 Mumbai, India terrorist attacks, whose targets included a Chabad House where the militants tortured and murdered six Jews.

This past September and March, Senator Schumer and Comptroller Stringer, respectively, wrote letters of commendation to ICNA Relief, the social services division of ICNA, praising the group for its commitment to the community.

Senator Schumer’s letter was specifically addressed to Arshad Jamal, ICNA Relief’s Northeast Regional Director. Schumer wrote, “Please accept my warmest greetings and congratulations on your work with ICNA Relief… Thanks to your hard work as Regional Director, ICNA Relief has continued its work in the New York region… [B]est of luck in all your future endeavors.” He signed it, “Charles E. Schumer, United States Senator.”

This past May, less than four months before Schumer’s letter, Jamal led an ICNA-sponsored anti-Israel rally in New York. Jamal posted images and video from the rally onto his social media, which included an individual wearing the ICNA rally shirt and holding a sign equating Israel with Nazis. Another sign depicted a graphic of the state of Israel with a Palestinian flag draped over it, saying, “ALL THIS IS OUR LAND.” Jamal’s video featured the rally goers chanting, “From the river to the sea, Palestine will be free,” a Hamas and PFLP-inspired anthem calling for the complete destruction of Israel from the Jordan River to the Mediterranean Sea.

Jamal’s New York event was not the first anti-Israel rally put on by ICNA. In fact, in July 2014, ICNA co-sponsored a pro-Hamas rally outside the Israeli Consulate in downtown Miami, Florida, where attendees repeatedly chanted, “We are Hamas,” “Let’s go Hamas,” and “Hamas kicked your ass.” Following the rally, the event organizer, Sofian Zakkout, wrote in Arabic, “Thank God, every day, we conquer the American Jews like our conquests over the Jews of Israel!”

Stringer’s letter – an official commendation from the Comptroller’s office – made reference to ICNA Relief’s history. The commendation began, “PRESENTED TO ICNA RELIEF For sixteen years of dedicated work to support Muslim communities in New York City and across the country.” But this is not all ICNA Relief did within the past 16 years. Indeed, their ‘charitable’ activities serve as a facade for their jihadist endeavors.

The Al-Khidmat Foundation (AKF) is the social services division of South Asian Islamist group Jamaat-e-Islami (JI). In August 2006, while ICNA Relief was a partner and top donor to AKF, AKF took a delegation to the Damascus, Syria residence of then-global Hamas leader Khaled Mashal and handed him a check for $100,000 to continue terrorist acts against Israel.

ICNA Relief, further, has sponsored a number of fundraising banquets, in recent years, featuring Monzer Taleb, a former leader of a singing troupe claiming to be “from Hamas,” who refers to Hamas militants as “SUPERHEROES” and who wrote, in June 2019, that Jews in Israel “should be relocated to Germany.” Taleb was named as an “unindicted co-conspirator” by the US Justice Department for the 2007 and 2008 federal trials prosecuting the Holy Land Foundation (HLF) terrorist charity and dealing with the financing of millions of dollars to Hamas.

Given ICNA’s many associations with terror and anti-Semitic bigotry, it is an obscene travesty that Senator Schumer and Comptroller Stringer have lauded the organization. It is beyond outrageous that ICNA receive any commendation or award, let alone from two Jewish public servants who are shamefully pandering to radical Muslims. Schumer and Stringer, who claim to be pro-Israel but offer Israel’s enemies legitimacy and praise, are practicing a dangerous form of hypocrisy. The two should immediately move to rescind these commendations and promote efforts to shut down ICNA for the public good.