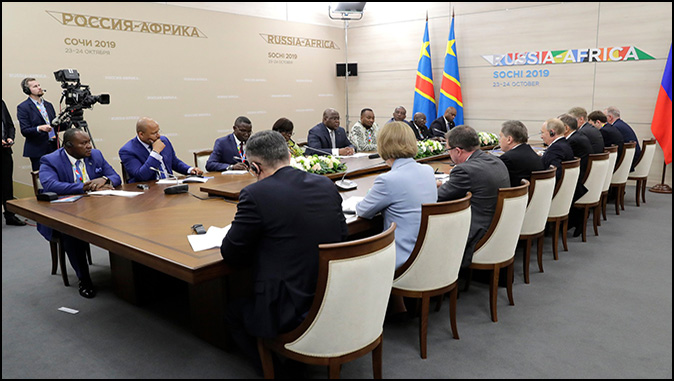 African voting patterns in the UN are just one indication of Russia’s growing influence in Africa. While Russia’s engagement on the continent is not nearly comparable in volume to that of China, Russia has nevertheless been significantly deepening its influence on the African continent in recent years, especially when it comes to arms sales — between 2015 and 2017 Russia entered into 19 cooperation agreements with African countries, largely about Russian weapons sales — and providing mercenaries.

According to Joseph Siegle, Director of Research at the Brookings Institution’s Africa Center for Strategic Studies:

“Unlike most major external partners, Russia is not investing significantly in conventional statecraft in Africa—e.g., economic investment, trade, and security assistance. Rather, Russia relies on a series of asymmetric (and often extralegal) measures for influence—mercenaries, arms-for-resource deals, opaque contracts, election interference, and disinformation”

According to a recent report by the Stockholm International Peace Research Institute, Russia was the largest arms supplier to African countries from 2017-2021, accounting for 44% of arms imports, followed by the US with 17% and China with 10%. The first Russia-Africa summit took place in Sochi in 2019, with leaders from more than 40 African countries in attendance. The second Russia-Africa summit is scheduled to take place this fall.

Although trade between Russia and African countries has reportedly doubled since 2015, to about $20 billion a year, China is still Africa’s largest trade partner, with trade between China and the continent at $254 billion in 2021. But Russia’s ultimate aims in Africa are the same as China’s: To gain influence by making African countries dependent on its services. While in the case of China, investments and infrastructure are offered in exchange for strategic access to vital natural resources and political leverage, in the case of Russia, it is weapons and Russian state-sponsored mercenaries, known as private military companies (PMCs) in return for the same.

“In its African strategy, the Kremlin is motivated foremost by a desire to thwart U.S. policy objectives, almost irrespective of their substance,” according to Federica Saini Fasanotti of the Brookings Institution.

“Considering Africa ‘one of Russia’s foreign policy priorities,’ Russian President Vladimir Putin also seeks to create African dependencies on Moscow’s military assets and access African resources, targeting countries that have fragile governments but are often rich in important raw materials, such as oil, gold, diamonds, uranium, and manganese…They also offer to these governments the ability to conduct counterinsurgency and counterterrorism operations unconstrained by human rights responsibilities… In turn, Russia seeks payment in concessions for natural resources, substantial commercial contracts, or access to strategic locations, such as airbases or ports.”

Russian mercenaries (PMCs) have been engaged in multiple African countries from Sudan to Mozambique, where they have left a trail of human rights abuses. The largest and most famous of Russia’s PMCs is the Wagner Group, a paramilitary organization linked to Yevgeny Prigozhin, a close ally of Vladimir Putin. Although ostensibly appearing as a private business, “its management and operations are deeply intertwined with the Russian military and intelligence community,” according to the Center for Strategic and International Studies (CSIS), and should be seen, therefore, as “a proxy organization of the Russian state rather than a private company selling services on the open market.”

According to a CSIS report from September 2020:

“Russia’s strategy is straightforward: to undermine U.S. power and increase Moscow’s influence using low-profile, deniable forces like PMCs that can do everything from providing foreign leaders with security to training, advising, and assisting partner security forces,

The Wagner Group is estimated to have operated in around 30 countries worldwide, from Syria to Venezuela. It is, however, not the only Russian private military company operating abroad to enhance Russian interests. There are several others, such as the E.N.O.T. Corporation in Syria and the Feraks Group in Iraq.

Most recently, in testimony before the Senate Armed Services Committee on March 15, General Stephen Townsend, Commander of United States Africa Command, referred to Russia’s PMCs, especially the Wagner Group, as “a malign influence.”

“They don’t follow anybody’s rules. They do what they want. They buttress dictators…they do gross violations of human rights. I think it’s bad for Africa’s security and prosperity in the future. They’re present in Libya…to a lesser extent in Sudan. They essentially run the Central African Republic. And they’re now in Mali, and a gathering strength and Mali, over thousand Wagner operators there now.”

The Wagner group has been accused of a litany of human rights abuses and war crimes. In the Central African Republic, for instance, where Russia sent the Wagner Group to support the government in its fight against various anti-government rebels, the Wagner Group has been accused of raping and robbing unarmed civilians. The UN documented more than 500 incidents of extrajudicial killings, torture, and sexual violence in 2020 alone.

Although the UN initially invited Russia to help resolve the intractable conflict, according to The New York Times:

“It quickly became clear that the Russian trainers were in fact armed mercenaries, and the operation… evolved into a thinly veiled effort to build influence and strike business deals for the Kremlin in Africa, including lucrative diamond deals, to the benefit of businessmen including a close confidant of President Vladimir V. Putin.”

In Mali, the Wagner mercenaries have been accused of executing 500 civilian men, reportedly the worst single atrocity in the country in decades. “One trader said he was drinking tea with his two brothers while waiting for the market to start when he heard shooting,” one eyewitness said according to Reuters.

“Seven Russians approached, gesturing for us to get up. There were no Malian soldiers with them. They searched us and the house, then took us east of the village, near the river, where we found another 100 men. Another group of Russians pointed at my brothers and another man. I thought they were going for interrogation. They took them several metres away and executed them, point blank.”

In Libya, estimates of the number of Wagner mercenaries deployed until recently ranged from 2,200 to 7,000. According to a March 2022 report by Middle East Monitor:

“Russia’s Wagner Group has withdrawn about 1,300 of its mercenaries from Libya to Russia through Syria to participate in the Russian military operation in Ukraine, according to military and strategic expert Colonel Adel Abdel Kafi.”

In 2020, the US military accused them Russian mercenaries in Libya of indiscriminately planting landmines and booby traps in the country, which have killed civilians. One type of booby trap device found was a 120-mm mortar shell connected to a teddy bear, which would detonate when the bear was touched or moved.

The Wagner Group was initially deployed in Ukraine during Russia’s invasion and subsequent annexation of Crimea in 2014.

This year’s Russian invasion of Ukraine — and the sanctions that it has engendered — is likely to incentivize Russia to seek even more engagement on the African continent in the coming years — as also for China. It should serve as a reminder to the current and future US administrations that as Russia and China increase their engagement, the US cannot afford to look the other way. “America cannot ignore Africa. Africa’s challenges, opportunities, and security interests are inseparable from our own…” General Townsend said at the March hearing.