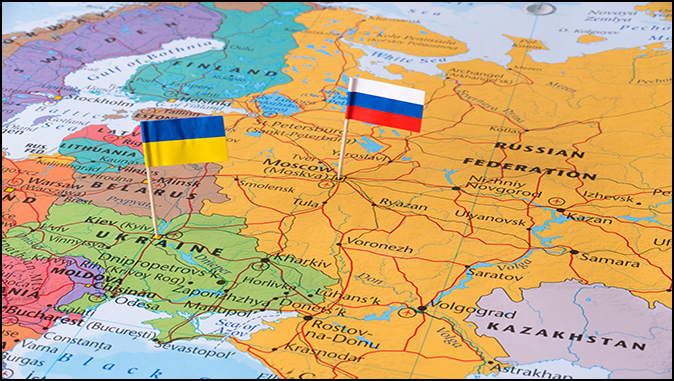 Russia and Ukraine: The Sword and the Shield
By Amir Taheri

By the time you read this article, Russian troops may have entered Ukraine or even captured its capital Kiev in a blitzkrieg that would have made Field Marshal von Paulus green with envy. Or, maybe you would witness nothing but more sabre rattling by Russian President Vladimir Putin.

The two contrasting possibilities, even if one is closer to a probability, illustrate the fact that no one knows what Putin, the consummate poker player keeping his cards close to his chest, has in mind.

At the risk of ending up with egg on my face, I belong to the group who think there would be no full-scale invasion. To back that assertion one could cite three reasons.

The first is that Ukraine isn’t such a pushover that some Western analysts believe. It has a ready fighting force of around 250,000 with around 900,000 reservists. In addition, tens of thousands of Ukrainians who are citizens of European and North American countries and who have some military experience have been organized in a second-tier reserve for their original homeland.

To be sure, Russia has twice as many troops ready to fight and double the number of reservists that Ukraine boasts. It also enjoys superiority in the number of war planes, tanks and armored vehicles. However, Russian forces have numerous commitments. They have to guard Crimea, annexed in 2014, keep a high profile in Chechnya and Dagestan, show the flag close to Belarus, guard the endless frontiers with China, keep friendly despots in power in Turkmenistan, Kyrgyzstan, Kazakhstan and Tajikistan, project power in Iran and, in a different context in Syria, stroll in Transcaucasia and maintain special units for a possible, if mythical, clash with the North Atlantic Treaty Organization (NATO). Even then, conquering Ukraine wouldn’t be a cake-walk, if any war ever is.

Next, Ukraine does not have any natural resources that Russia might covet.

Between the 18th and 20th centuries, Ukraine, with its wheat-rich prairies, was the bread basket of the Tsarist Empire and, thanks to the Cossack element in its population, a fertile recruiting grant for elite mercenary fighters.

Those two factors, along with the fact that Kiev was the historic birthplace of what was to become the Russian “race”, if such a term has any meaning now, gives Ukraine a special status in the average Russian’s imagination.

All that, however, has faded into historic memory. Ukraine (“Frontier”) or the Ukraine (“the Frontier,” as Russians insist on calling it) is little more than a chunk of territory. And that is something that Russia, at least since shaking off the Mongol yoke, has not lacked. Solzhenitsyn liked to say that, having bitten more land that it could chew, Russia is “choking on territory.”

On the eve of the fall of the Soviet Empire, he advised Russians to get rid of their imperial possessions. In that he was echoing Khomiakov, the poet and prophet of pan-Slavism who saw Russia as the new standard-bearer of Christianity (the Third Rome), seeking conquest of human souls rather than chunks of territory.

The third element in our belief that invading Ukraine today may have little justification for Russia is the loss of its historic role as “the shield of the empire.” Kutuzov, the Russian general who defeated Napoleon, liked to say that Russia was his sword and Ukraine the shield. But even that was not always true. The Ukrainian “shield” didn’t prevent Bonaparte from reaching Moscow and burning it.

Nor did Operation Barbarossa, launched by Hitler, stop at “The Frontier.” Even worse, when needed, Russia was ready to drop “the shield” and run to the steppes. The Treaty of Tilsit in 1815 offered a foretaste of that, and the Brest-Litovsk deal signed by Trotsky with Imperial Germany in the First World War made Ukraine looks more like a sacrificial lamb than shield.

But who is going to invade Russia today?

Putin’s propaganda tries to portray NATO as the putative invader. At the same time he makes much of Russia’s money out of selling oil and gas to NATO members in Europe who, in turn, allow his money to be nested in their banks. As there has never been a war without at least some outline of an objective to be achieved, it would be wise to ask what NATO could gain from invading Russia via Ukraine.

For decades NATO’s raison d’être was to counter the Warsaw Pact led by the Soviet Union. But the Warsaw Pact has long ceased to exist and NATO members have massively scaled down resources and intellectual energies allocated to the alliance. In fact, under President Barack Obama, the US treated NATO as an encumbrance, while under President Joe Biden, the US has started concocting a parallel alliance with a few nations in the Anglo-sphere.

Moreover Russia, as the USSR, was closely associated in building a new world order after the Second World War and invited to join the Marshall Plan and NATO — offers that Stalin refused. The Helsinki Accords, towards the end of the Cold War, signaled Russia’s change of view on NATO from an existential threat to an instrument of diplomatic and cultural pressure. After the Cold War, Russia reached a number of cooperation accords with NATO and endorsed the US-led military interventions in Iraq and Afghanistan.

Putin tries to pose as a potential victim of a non-existent aggression. By doing so, he hopes to garner some sympathy at home and in other places where anti-American shibboleths provide the last refuge of assorted scoundrels.

It is with the same narrative of victimhood that he tries to peddle his shenanigans as “action to protect kith and kin”. Although not specifically recognized international law or the Vienna and Geneva Conventions dealing with armed conflict, that principle could enjoy a certain degree of moral legitimacy. But even then, it won’t apply to Ukraine, as the Kiev-based state isn’t persecuting any ethnic Russians or adepts of the Orthodox Church. By all accounts, a majority of Ukrainians wish to distance themselves from Russia to get closer to Western European democracies. They may be wrong in that but they certainly have as much right to exercise their national sovereignty as any other member of the United Nations.

Putin seems to be dreaming of a cordon sanitaire for Russia, one that is more of a cultural-political shield rather than a glacis in military terms. He wants Russia surrounded by Finlandized countries from China to the Caspian Basin, the Middle East and East and Central Europe.

Rather than threatening invasion, Putin should try to make his Russia so attractive that Ukrainians and others wish to choose it as a model rather than looking to old Western democracies. That, however, means that Russia must change and deal with its centuries-long identity crisis between European aspirations and Asiatic fears.