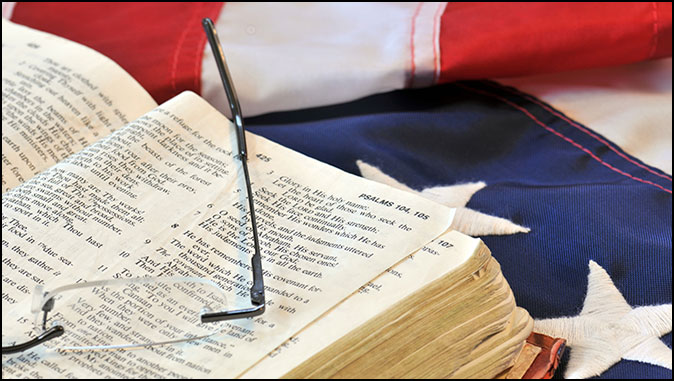 Suppose you were a man who was sailing in the Caribbean Sea and suddenly shipwrecked on an uncharted, uninhabited island. It’s a relatively large, beautiful location with abundant resources. There’s plenty of available building materials, fresh water to drink, and food to eat.

At this point, the need for something called “government” has not arisen, but one day another man unexpectedly shipwrecks and swims to the shore of your paradise. As you watch him stumble out of the surf, you whisper to yourself, “Uh-oh.”

All of a sudden, you’re not the only guy whose opinion counts. Before the new arrival, you could do whatever you wanted, and no one would complain. Now, you have to consider the needs and wants of another human being. There is suddenly a need for “rules” to govern the actions of both men.

And if a woman suddenly shipwrecks on the island, well, talk about complications!

The purpose of good government

God created mankind as a social creature. Among other things, we are built for community and fellowship with the people around us. While a few handfuls of us prefer solitude, the vast majority of men and women desire company in this life.

Such community, especially as the number of people swells in any given location, requires several connected realities. These include: (1) rules or laws for governing conduct; (2) a method for crafting said regulations; (3) leaders to formulate them; (4) someone to execute the laws; (5) judges to decide who has transgressed the rules; and (6) someone else who punishes the lawbreakers. This is what we call government.

The Bible makes clear that God is the author of government. In Romans 13, for example, we see one of the clearest outlines of the nature and purpose of this institution, which consists of “the governing authorities” (v. 1). Paul makes a number of observations that help us understand why governments exist, and what they were created to do.

1. All authority comes from God.
Paul says “there is no authority except from God, and those which exist are established by God” (v. 1). The New Testament word translated “authority” is the Greek word exousia, which refers to two related concepts. The first is what we normally mean when we think of authority, which is the right to rule. The second is the powerby which authority is expressed.

Theologian Adam Clarke states that God is “the origin of power” and authority. Therefore, when Paul speaks of the exercise of human authority, it flows from God to human agencies. Without this delegation of exousia, all would be chaos. Clarke says that, without this transfer of authority, “there could be no society, no security, no private property; all would be confusion and anarchy, and the habitable world would soon be depopulated.”

2. All people, including Christians, are to be subject to government.
Since God is the source of authority, no one has the right to rebel against it, since this means they rebel against the One who gave the authority in the first place. Paul says that “whoever resists authority has opposed the ordinance of God; and they who have opposed will receive condemnation upon themselves.”

Paul is speaking generally, because Christians are not obligated to obey government if it means disobeying God (Acts 4:19-20, 5:29).

Instead, according to Strong’s Concordance, the idea of someone resisting legitimate authority means “to rage in battle against, to set oneself against.” Paul is warning against armed insurrection or even the attitude of, “I don’t let anyone tell me what to do – including the government.”

3. Good government functions according to God’s purposes for it.
First, Paul says in Romans 13 that government is called to promote what is good. Such authority praises and rewards “good behavior” (v. 3). It is “a minister [servant] of God to you for good” (v. 4).

Second, a government that is functioning properly will punish what is evil. Paul says, “But if you do what is evil, be afraid; for it does not bear the sword for nothing; for it is a minister of God, an avenger who brings wrath on the one who practices evil.”

Of course, promoting what is good and punishing what is evil is a very general statement. There are as many definitions of “good” and “evil” as there are people. What Paul is referring to is good and evil as God defines it. A government should be established on righteousness (Psalm 89:14). It should, among other things: protect the weak, the fatherless, the afflicted, and needy and rescue them from the wicked (Psalm 82:3-4); rescue those who are oppressed (Psalm 119:134); deliver the ones who are being led to slaughter (Proverbs 24:11-12); and loosen the bonds of wickedness (Isaiah 58:6).

Of course, the opposite is true as well. Governments can call good, evil, and call evil, good, just like people do. The Lord holds nations – and their governments – accountable for their actions according to whether or not they do what is pleasing in His sight (Jeremiah 18:7-10).

That’s why it is notable that Romans 13 does not tell us what form of government God prefers, only that it is created to serve Him. This would mean that a government could be a democracy, republic, monarchy, etc. It would therefore be incumbent upon people, if they are given the choice, to create the wisest form of government possible. That is something our founders clearly did.

However, because they are constructed by human beings, all governments will be marred by human imperfection, brokenness, and sin. Remember, the law of Moses was written by the very finger of God on Mount Sinai. It was perfect, good, and holy. And yet, even this perfect form of government was undermined by the fallenness and sinfulness of human nature (Romans 8:3).

Thus, we need to remember that every form of government, which after all is written by men and not the finger of God, will ultimately be undermined by human lawlessness, pride, and greed. We must never delude ourselves into thinking that what men can create will ever be perfect. Moreover, when men promise perfection, only a fool will believe it.

Yet, if governments can be undermined, they can likewise be improved. In a nation like our own, in which the citizens have the power to mold the government according to their own moral precepts, Christians have a responsibility to be active in the political process. If we want our nation to honor the Lord in its government, those who follow Christ must place their imprint on it to the best of their ability.

The United States is the only nation we have. There is nowhere else to go to start over, unless someone happens to know the location of a good, unused, uninhabited island.