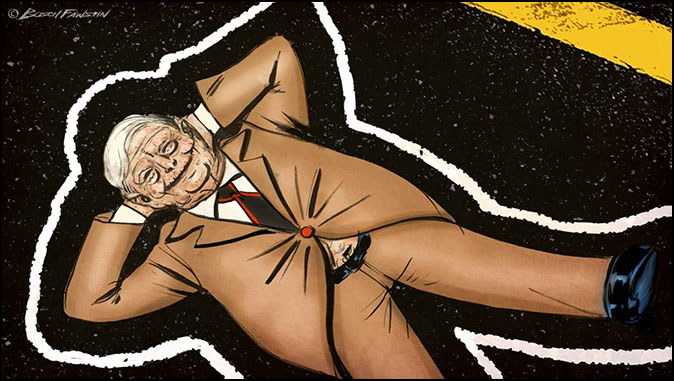 Removing Soros Prosecutors
They swear the oath with tongue in cheek – and violate it.
By Jonathan Emord

Billionaire George Soros has dumped over $40 million into left-wing anti-incarceration prosecutor candidates’ coffers nationwide with considerable success for his defund the police, no cash bail, no incarceration and early release agenda. As the Law Enforcement Legal Defense Fund reports 75 George Soros backed candidates have won elections in half of the nation’s urban jurisdictions (affecting 72 million people). Those prosecutors are waging war on the criminal justice system and the rule of law, refusing to prosecute crimes (even violent crimes) when committed by politically favored constituencies and issuing criminals get out of jail free and early release cards, fueling wave after wave of recidivism and upticks in violent crime statistics. The effect has been to transform cities from New York to Philadelphia to Chicago to Los Angeles into sanctuaries for repeat offenders who have an effective license to victimize whomever they choose. Police in those jurisdictions are demoralized and the public outraged, but the ideological prosecutors remain unperturbed and steadfast in their efforts to keep criminals on the streets.

Every prosecutor swears an oath of office to uphold the Constitution and the law. The Soros-backed prosecutors swear the oath with tongue in cheek and violate it and obstruct justice with impunity thereafter, refusing to charge and prosecute those who have committed heinous crimes, leaving victims to suffer. Jurisdictions controlled by Soros prosecutors have begun to fight back following the example of a courageous judge, of an equally courageous attorney general, and of citizens fed up with unchecked lawlessness.

There are emerging multiple avenues to countermand and neuter Soros-backed prosecutors: (1) remove them from individual criminal cases in favor of judicially selected independent prosecutors; (2) remove them in favor of prosecutors from the state attorney general’s office; (3) impeach or recall them; and (4) vote them out of office.

Soros-backed Buta Biberaj (Loudoun County Commonwealth’s Attorney)–who Soros helped install with a whopping $922,000 in campaign contributions (84% of her total receipts)–has twice been removed from criminal cases by Loudoun County Circuit Judge James Plowman. A former Commonwealth’s Attorney who did prosecute criminals, Judge Plowman will not tolerate Biberaj’s lack of prosecutorial impartiality. In 2019, a 15-year-old boy dressed in a skirt, said to be transexual, raped a girl in a high school restroom. He was placed in a Juvenile Detention Center but then released and reassigned–with the assent of the Loudoun County School Board–to another high school in the county where he groped another girl in that high school’s restroom.

At a Loudoun County School Board meeting, Scott Smith, father of the girl who was raped, condemned a board proposal that would allow students who identify as transexual to use whichever gender restroom they preferred. Smith argued that his own daughter had been raped as a result of policies that allowed a biological male who identified as transsexual to prey upon girls in the girls’ restroom. At the time of the vote, the Board and the Superintendent of Schools hid from the public the facts and circumstances of the rape to enhance likelihood that the proposal would pass. Although the rapist was not jailed, the father of the victim, Scott Smith, was. It was he, then, against whom Biberaj brought charges of disorderly conduct and resisting arrest, demanding Smith serve jail time, without the benefit of any prior precedent for incarceration based on comparable facts and charges. Biberaj who campaigned on the promise that she would end incarceration decided that a rapist and sex offender should not be jailed but a protesting father exercising his First Amendment rights at a school board meeting should be.

Judge Plowman ruined Biberaj’s plans, however. Agreeing with the defense that Biberaj lacked requisite impartiality, he removed her from the county’s case against Smith and appointed an independent prosecutor. In like manner, in another case where Biberaj refused to prosecute a man arrested on multiple charges, including two felonies for burglary from among a string of additional burglaries, Judge Plowman rejected Biberaj’s plea agreement based on his finding that she deliberately misled the court and the public by withholding material facts. He again removed Biberaj from the case.

The example set by Judge Plowman should be followed in jurisdictions nationwide where Soros-backed DAs refuse to prosecute criminals and thereby deny victims justice and imperil public safety. In addition, Virginia Attorney General Jason Miyares is seeking legislation that would give him discretion to substitute attorneys from his office for prosecutors unwilling to prosecute. That legislation did not pass in the Democrat state Senate but may be reintroduced following the November 2023 state elections when a Republican majority is expected. General Miyares’ legislation also serves as a model that should be replicated across the nation.

In some jurisdictions, the public can avail itself of effective recall options. In almost all jurisdictions, impeachment is available. In instances where Soros-backed DAs show a pattern of refusing to prosecute or of biased enforcement (such as the Biberaj example in the Smith case), they violate their oaths of office and they obstruct justice. Consequently, articles of impeachment are appropriate and can enable state houses to impeach and state senates to try, convict, and remove those enemies of the rule of law. Recall and impeachment can achieve removal from office or, at a minimum, can bring to light the heinous criminal consequences that flow from prosecutors who will not prosecute, inviting their defeat in future elections.