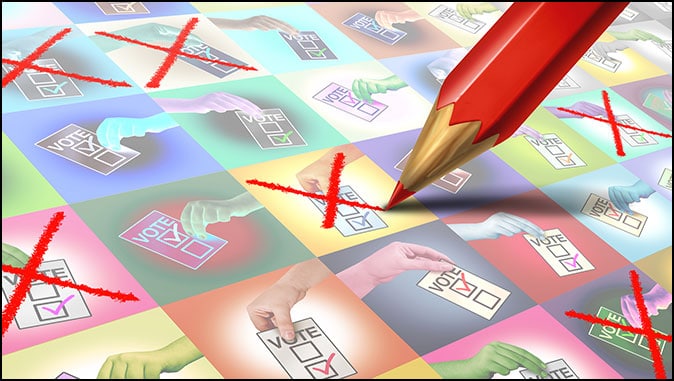 Democrats are castigating Georgia for requiring voters to present valid identification, as they are required to do when they board an aircraft or cash a check. On the other coast, where Californians of all persuasions are attempting to recall Gov. Gavin Newsom, Democrats are ramping up real voter suppression.

As Edward Ring notes in the California Globe, state Senator Josh Newman sponsored SB 663, which would “provide a mechanism for the target of a recall petition to communicate with constituents who may have signed that petition,” and “provide a meaningful opportunity for voters who may have signed a recall petition to withdraw their signatures.” The Orange County Democrat has strong motivation for the measure

In 2018, as Nick Gerda of Voice of Orange County explains, voters “removed Democratic state Sen. Josh Newman from his north OC-based seat and replaced him with a Republican, eliminating the Democrats’ supermajority control of the state Senate.” The recall effort was spearheaded by Republican students at Cal State Fullerton. The state Democratic Party responded by changing the recall rules and targeting the students with a lawsuit intended to “stop the petition from circulating and halt the recall process.” With Newsom on the line, Democrats are now deploying similar measures.

Don Perata, a termed-out politician known for living large, is back with “Stop the Steal California.” The group claims the recall is “expensive and unnecessary” and wants to force disclosure of all petitions. Ring wonders if operatives will show up at doors offering petition signers an opportunity to withdraw their signature, in the style of SB 663. That bill has been pulled but it could be revived. And it was not the only weapon in the Democrats’ arsenal.

Perata also threatens “further legal remedies,” in the style of the lawsuit against the Fullerton students. For his part, California Democrat Party boss Rusty Hicks branded the recall the “California coup being led by “right-wing conspiracy theorists, white nationalists, anti-vaxxers and groups who encourage violence on our democratic institutions.”

As Ben Christopher of CalMatters helpfully clarified, “a recall campaign is a democratic mechanism written into the California constitution that allows voters to remove an elected official by popular vote.” In 2003, Californians used the democratic mechanism to recall Democrat Gray Davis, who couldn’t even keep the lights on. Blackouts have also appeared on the watch of Gavin Newson, a crony of Jerry Brown, the former nephew of Nancy Pelosi, and a partisan Democrat of colossal incompetence and hypocrisy.

In March of 2020, the legislature granted Newsom extraordinary powers and he has since ruled as a virtual autocrat. Newsom imposed draconian regulations on the people, spent more than $1 billion on masks from a Chinese company, then cavorted with lobbyists sans mask at the upscale French Laundry restaurant.

Californians were already suffering under the repressive Assembly Bill 5, a virtual declaration of war on independent workers. Despite a plea from California’s leading economists and political scientists, Newsom declined to suspend the measure during the pandemic.

Businesses shut down, but the governor and Democrat-dominated legislature gave Californians no relief from the nation’s highest income and sales taxes. As ABC News reported in January, on Newsom’s watch “as much as $31 billion in California unemployment funds have been paid out to scammers.” In March of 2019, Newsom reprieved all 737 murderers on California’s death row, the worst of the worst, serial killers, cop killers and the like.

Even people who voted for Newsom feel abandoned, and without support from Democrats and independents, recall backers would not have been able to gather more than two million signatures by mid-March. As the recall effort surged, Democrats reached for their bullhorns.

“Right-wing Republicans in CA are trying to recall Gavin Newsom for the crime of telling people to wear masks and for listening to scientists during COVID,” tweeted Sen. Bernie Sanders. “Extremist Republicans have done enough to undermine democracy already. We must all unite to oppose the recall in California.”

Delaware Democrat Joe Biden also opposes the recall, and the effort is “inappropriate,” according to California Rep. Karen Bass, once on Biden’s short list for vice president. Bass, a Fidel Castro fan, told reporters Newsom has done “the best he could.” At least two million California voters don’t think so, and they have new evidence of misconduct.

Four members of the California National Guard told the Los Angeles Times the Guard had been ordered to ready an F-15C fighter jet to “buzz” any crowds that dared to assemble at the outset of the pandemic. Any such order would have to proceed from Gov. Gavin Newsom, commander-in-chief of the National Guard. Last year Newsom deployed CHP troopers in full riot gear to prevent Californians from protesting at the state Capitol in Sacramento. This year, the heavily coiffed Newsom is not the voters’ only target.

A recall campaign has been authorized for San Francisco district attorney Chesa Boudin, who prior to election in 2019 had never prosecuted a case. Boudin is the son of Weather Underground alum Kathy Boudin, who served 22 years in prison for her role in an armored car assault in Nyack, N.Y. that claimed the lives of police officers. Son Chesa, named for cop-killer Joanne Chesimard, has eliminated entire categories of crime, now surging across the city. Even in left-wing San Francisco, the people have had enough.

Chesa Boudin replaced George Gascon, appointed in 2010 by San Francisco mayor Gavin Newsom, when Kamala Harris ran for state attorney general. Now district attorney in Los Angeles, Gascon has removed all crime enhancements in trials, ordered prosecutors not to attend parole hearings, and supported the resentencing of those with murder convictions after serving only 15 years. These measures sparked a recall effort that will soon be authorized to gather signatures.

Recall efforts are not a “steal” or a “coup.” They are democratic measures that empower the people to remove politicians from office. That’s why Democrats, in their quest for a one-party state, are ramping up voter suppression against the people.