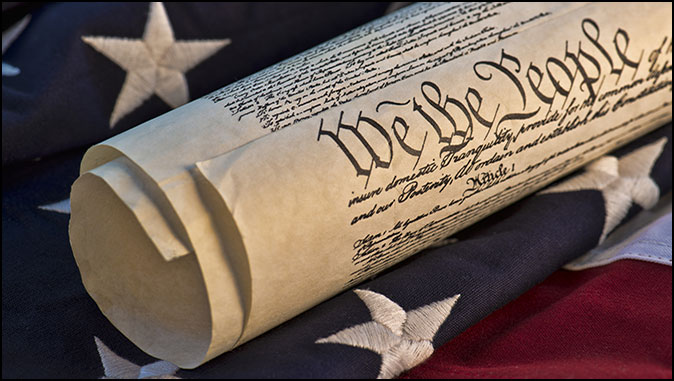 Radical Left Court Packing Will Destroy the Constitution
Say goodbye to free speech and other constitutional freedoms.
By Joseph Klein

Joe Biden is waiting until the last minute before Election Day to finally tell voters where he stands on packing the Supreme Court, which would expand the number of justices who sit on the Supreme Court to ensure a progressive left majority for decades to come. It doesn’t really matter, however, what Biden thinks about court packing in his heart of hearts. If Democrats sweep the White House as well as both the House and Senate, packing the Supreme Court will almost certainly become a reality along with an end to the Senate filibuster.

Although President Franklin D. Roosevelt failed in his effort to pack the Court in 1937, there is nothing in the Constitution to stop a heavily, more leftist Democrat Congress from succeeding this time. As Senate Minority Leader Chuck Schumer said, “everything is on the table” if the Democrats take the Senate and Schumer becomes the Majority Leader. Say goodbye to the independence of the judiciary and the Supreme Court’s legitimacy as an institution. Say goodbye to the separation of powers among the three branches of government to legislate, to execute, and to adjudicate respectively, where the courts have an assigned role to interpret but not to make the law. Say hello instead to the progressive left’s own version of a super legislature. Moreover, the protections of individual liberties from government overreach set forth in the Constitution’s Bill of Rights will be out the window. Strict limitations will be imposed on freedom of speech, for example, in accordance with critical race and other radical progressive legal theories.

When Supreme Court justices discard any shred of judicial restraint, they trash the Constitution. Such judicial activists are willing to strip away meaningful limitations on governmental power contained in any reasonable reading of the Constitution’s text in order to achieve their far-reaching “social justice” policy objectives. The late Justice William Douglas, an extreme environmentalist, provided an example of a progressive justice run amok. He went so far as to say that inanimate objects like trees should have their own standing as plaintiffs in lawsuits to protect the wilderness, stating that “[c]ontemporary public concern for protecting nature’s ecological equilibrium should lead to the conferral of standing upon environmental objects to sue for their own preservation.”

As crazy as Douglas’s words may seem to most Americans with a modicum of common sense, progressive leftists today want to pack additional justices onto the Supreme Court who are far more radical than Douglas. The court packing progressive leftists intend to throw America’s system of constitutional government and rule of law – premised on checks and balances, separation of powers, and judicial independence – overboard. In their place, these progressive leftists want one party government with an ensured Supreme Court majority subordinate to their will. The remaining justices diligently trying to interpret the law as written and apply it to the facts before them will be overwhelmed by radical justices telling us, for example, the words we are permitted and not permitted to say or write.

Leftist legal commentators have questioned U.S. case law exalting the preeminent importance of the First Amendment’s protection of free speech. It is outdated, they say, and out of step with other Western democracies that weigh values such as human dignity, equality and freedom from hateful language as on par with freedom of speech. Critical race theorists, for example, have argued that the First Amendment should not protect what they consider to be racist hate speech. They want to regulate speech that they believe is degrading against a historically oppressed group such as blacks. They reject Justice Louis D. Brandeis’s classic formulation that the remedy to bad speech is “more speech, not enforced silence.”

Richard Delgado, a leading critical race theory scholar, co-authored an article published by the Cornell Law Review back in 1992, which argued that “modernist and postmodern insights about language and the social construction of reality show that reliance on countervailing speech that will, in theory, wrestle with bad or vicious speech is often misplaced.” Instead, according to Delgado, “we should not let a spurious motto that speech be ‘everywhere free’ stand in the way of outlawing speech that is demonstrably harmful.”

Under critical race theory, would phrases like “All Lives Matter” or “Blue Lives Matter” be considered “demonstrably harmful” as derogatory put downs of the Black Lives Matter motto and, by extension, of blacks themselves? Who gets to decide what speech is “demonstrably harmful?” Critical race theorists like Delgado want “woke” progressive courts, ultimately a stacked Supreme Court, to make such determinations. Instead of allowing a free exchange of ideas regarding police treatment of African Americans and the demands of the Black Lives Matter movement, the critical race progressives want the government to have veto power over what people can say about such sensitive topics.

Catharine Alice MacKinnon, a prominent radical feminist lawyer and professor, has focused her attention on “pornography,” which she considers to be equivalent to an act of rape that should be more strictly regulated. She has also argued more generally that equality and freedom of speech are competing values “on a collision course.” Equality, she believes. should prevail. MacKinnon made the preposterous claim that the right of free speech has become “more exclusive, coercive, and violent as it has become more and more legally protected.” In a 2018 essay collection entitled “The Free Speech Century,” MacKinnon wrote that “the First Amendment over the last hundred years has mainly become a weapon of the powerful.” It no longer serves “radicals, artists and activists, socialists and pacifists, the excluded and the dispossessed,” she argued. Instead, the First Amendment now serves “authoritarians, racists and misogynists, Nazis and Klansmen, pornographers and corporations buying elections.”

The New York Times Sunday Magazine featured as its cover story on October 18th an article questioning the importance attached by the judiciary in this country to free speech protections. It was written by Emily Bazelon, a staff writer at The New York Times Magazine and the Truman Capote Fellow for Creative Writing and Law at Yale Law School. Her article is indeed an exercise in very “creative” writing. Bazelon’s rambling essay should not be taken seriously, except for the fact that it reflects the thinking that will find a prominent place on a Supreme Court packed with progressive left justices.

Bazelon writes that “it’s time to ask whether the American way of protecting free speech is actually keeping us free.” She argues that “good ideas do not necessarily triumph in the marketplace of ideas,” pointing specifically to what she describes as “the mass distortion of truth and overwhelming waves of speech from extremists that smear and distract” flourishing on social media. Bazelon quotes from a forthcoming book entitled “The Politics of Language,” written by philosopher Jason Stanley and the linguist David Beaver, who argue that “Free speech threatens democracy as much as it also provides for its flourishing.”

Bazelon also quotes Hannah Arendt to support the proposition that the dissemination of “propaganda” helps create a totalitarian society. But Hannah Arendt was actually a strong proponent of freedom of speech. She wrote: “If someone wants to see and experience the world as it ‘really’ is, he can do so only by understanding it as something that is shared by many people, lies between them, separates them, showing itself differently to each and comprehensible only to the extent that many people can talk about it and exchange their opinions and perspectives with one another, over against one another. Only in the freedom of our speaking with one another does the world, as that about which we speak, emerge in its objectivity and visibility from all sides.”

Bazelon cites the law in other democracies where freedom of speech is but one of several equally important values that must be equitably balanced. “The principle of free speech has a different shape and meaning in Europe,” she writes. “For the European Union, as well as democracies like Canada and New Zealand, free speech is not an absolute right from which all other freedoms flow…Germany and France have laws that are designed to prevent the widespread dissemination of hate speech and election-related disinformation.”

In the United States, freedom of speech is not an absolute right either. Incitements to imminent acts of violence, for example, are not protected speech. But giving the power to government agencies and courts to decide what is or is not “hate speech” or “disinformation” is an invitation to eventual government control of what we can say and write. It won’t be long before restrictive speech codes that are so prevalent in colleges and universities today become enshrined in statutes and regulations and upheld by a packed progressive Supreme Court.

Globalist progressives will further expect that their supermajority of Supreme Court justices will incorporate so-called “internationally accepted norms” in “interpreting” what constitutes allowable speech in public discourse under a neutered First Amendment. Once these justices have fused our Constitution with such vaguely defined “international norms” created by unaccountable outsiders, they will have begun the process of erasing the protection of individual rights unique to this country.

In short, America’s constitutional system of self-government, separation of powers and protection of individual rights under the rule of law, which has endured for more than two centuries, will stand no more under the weight of a Supreme Court packed with progressive leftists.