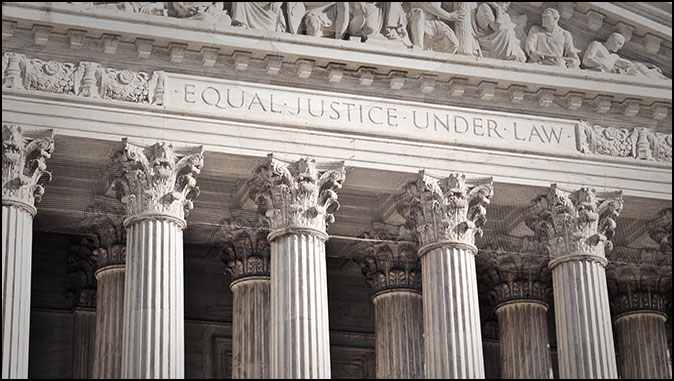 ShutDownDC is a far-left group that has adopted the confrontational tactics of the radicals’ hero, Saul Alinsky.

True to form, ShutDownDC has just announced its intention to target Supreme Court Justice Brett Kavanaugh with a disruptive protest at his home on September 13th. The reason ShutDownDC gives for invading the privacy of Justice Kavanaugh and his family is that he voted as part of the 5-4 majority to allow Texas’s new anti-abortion law to go into effect for the time being. Texas’s law bans abortion when there is a fetal heartbeat, which typically occurs approximately six weeks into a pregnancy.

The Supreme Court majority went out of their way to make clear that they were not ruling on the merits of the Texas statute. All these justices did was to reject, on purely procedural grounds, an emergency application for an injunction to block Texas’s new law from going into effect. They explicitly left open the question of whether Texas’s law is constitutional.

“Brett Kavanaugh: You’re going to hear from us directly,” ShutDownDC warned on Facebook. The radicals demanded that Justice Kavanaugh “keep your oppressive” ideology “out of our bodies.”

Spreading hysteria to rile up the “masses” is the left’s trademark. ShutDownDC is no exception. The group has joined its comrades in raising the specter that the Supreme Court’s decision “effectively overturned the right to an abortion.”

The left’s claim that the Supreme Court has abolished the constitutional right to an abortion by overturning Roe v. Wade is a blatant lie.

The majority made no mention of Roe v. Wade, much less indicate that they were prepared to overrule the precedent that created a constitutional right to abortion. To the contrary, the majority said that “we stress that we do not purport to resolve definitively any jurisdictional or substantive claim in the applicants’ lawsuit. In particular, this order is not based on any conclusion about the constitutionality of Texas’s law, and in no way limits other procedurally proper challenges to the Texas law, including in Texas state courts.”

In targeting Justice Kavanaugh, the radical leftists are continuing their campaign to delegitimize him, a campaign which started during his Senate confirmation hearing.

AOC and other leftists want to remake the Supreme Court in their own image by packing the Court with more leftist justices. To accomplish this objective, they are demanding the elimination of the Senate filibuster.

Far-left radicals go even further with their tactics of intimidation. One of ShutDownDC’s organizing principles is to engage in “disruptive direct action” as part of its effort to “move forward to dismantle the interlocking systems of oppression that have plagued this land for centuries.”

ShutDownDC is part of a coalition with Black Lives Matter DC and All Out DC, a local Antifa group. The latter’s motto is “burn down the American plantation.” ShutDownDC and its coalition partners claim to be anti-fascists while engaging, however, in fascist tactics to hound anyone who gets in the way of their radical agenda.

In 2019, ShutDownDC lived up to its name by literally shutting down the nation’s capital to protest against climate change. All they accomplished was to inconvenience ordinary Americans trying to go about their business. They even interfered with people trying to get to a hospital. The organizers admitted awareness of the “massive disruption to people who bear little responsibility for the climate catastrophe we are facing.” However, the organizers said that the disruption to such people’s lives was worth it because “we will also cause massive disruption for politicians, huge corporations and the lobbyists who control our government.”

Last January, Senator Josh Hawley was the object of ShutDownDC’s wrath. Senator Hawley tweeted at the time: “Tonight while I was in Missouri, Antifa scumbags came to our place in DC and threatened my wife and newborn daughter, who can’t travel. They screamed threats, vandalized, and tried to pound open our door. Let me be clear: My family & I will not be intimidated by leftwing violence.”

Last month, ShutDownDC warned those people whom the radical group accused of “killing the earth” that “We know where to find you… and we’re coming for you.”

Not content with protesting peacefully in front of the Supreme Court, these same radicals are now threatening to harass Justice Kavanaugh and his family at their home.

It’s time to shut down the fascist tactics of ShutDownDC and its far left Black Lives Matter and Antifa coalition partners.