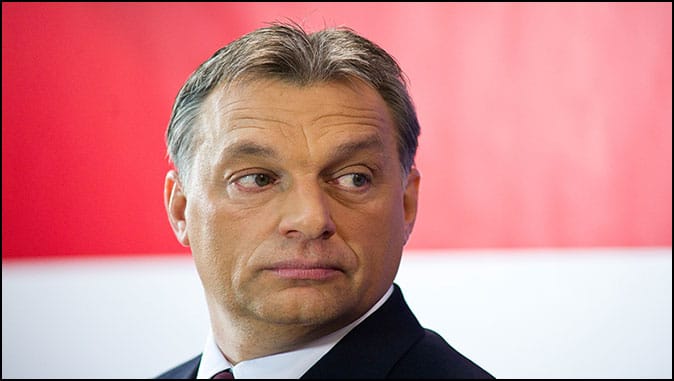 Raymond Ibrahim is a Shillman Fellow at the David Horowtiz Freedom Center.

Criticism against Hungarian Prime Minister Viktor Orbán is again on the rise, now that his nation is set to take the presidency of the Visegrad group of Central European nations next month. According a recent report, “Britain’s government has condemned comments made by Viktor Orbán about Muslims and migrants on the eve of a bilateral meeting between the Hungarian leader and UK Prime Minister Boris Johnson. In a statement, No. 10 Downing Street said that Orbán’s 2018 comment to a German newspaper about ‘Muslim invaders’ and his later description of migrants as ‘a poison’ were ‘divisive and wrong.’”

In fact, Orbán’s ultimate motive is to secure his nation against the crimes and problems that come along with Muslim migrants. Speaking back in 2015, during the heyday of mass Muslim migration into Europe, he clearly laid out his logic:

Those [migrants] arriving [into Europe] have been raised in another religion, and represent a radically different culture. Most of them are not Christians, but Muslims. This is an important question, because Europe and European identity is rooted in Christianity…. We don’t want to criticize France, Belgium, any other country, but we think all countries have a right to decide whether they want to have a large number of Muslims in their countries. If they want to live together with them, they can. We don’t want to and I think we have a right to decide that we do not want a large number of Muslim people in our country. We do not like the consequences of having a large number of Muslim communities that we see in other countries, and I do not see any reason for anyone else to force us to create ways of living together in Hungary that we do not want to see….

The prime minister went on to invoke history—and not in the politically correct way (to condemn Christians and whitewash Muslims) but according to reality:

I have to say that when it comes to living together with Muslim communities, we are the only ones who have experience because we had the possibility to go through that experience for 150 years.

Orbán was referring to Islam’s conquest and occupation of Hungary from 1541 to 1699. Then, Islamic jihad, terrorism, and Christian persecution were rampant.

Indeed, on this very day in history, on June 15, 1389, a horde of Muslim Turks met and crushed a coalition of Serbs, Hungarians, Poles, and Romanians, at the pivotal Battle of Kosovo. Thereafter, much of southeastern Europe, including Hungary, and portions of modern day Russia, was conquered, occupied, and terrorized by the Turks—sometimes in ways that make Islamic State atrocities seem like child’s play. (Think of the beheadings, crucifixions, massacres, slave markets, and rapes that have become IS trademarks—but on a much grander scale, and for centuries.)

Still, to Western “progressives,” such histories and the lessons they impart are meaningless. Thus, in an article titled “Hungary has been shamed by Viktor Orbán’s government,” the Guardian mocked and trivialized the prime minister’s position:

Hungary has a history with the Ottoman empire, and Orbán is busy conjuring it. The Ottoman empire is striking back, he warns. They’re taking over! Hungary will never be the same again!… Hence the wire; hence the army; hence, as from today, the state of emergency; hence the fierce, unrelenting rhetoric of hatred. Because that is what it has been from the very start: sheer, crass hostility and slander.

Similarly, after acknowledging that Hungary was once occupied by the Ottomans—though without any mention of the atrocities it experienced—the Washington Post complained that “it’s somewhat bizarre to think this rather distant past of warlords and rival empires ought to influence how a 21st century nation addresses the needs of refugees.”

Unable, or rather unwilling, to appreciate the continuity of Islam’s history with the West—many Muslims in Europe, including migrants, maintain their ancestors’ hostility for “infidels”—the so-called “mainstream media” fall back to default: they accuse Orbán of being a “racist,” “xenophobic,” a man “full of hate speech,” and Europe’s “creeping dictator.” Sounding like the mafia boss of the Left, the Guardian simply refers to him as a “problem” that needs to be “solved.”

If this is how politicians who speak truthfully and implement policies that secure their nations are treated, is it any wonder that so very few politicians bother doing so?