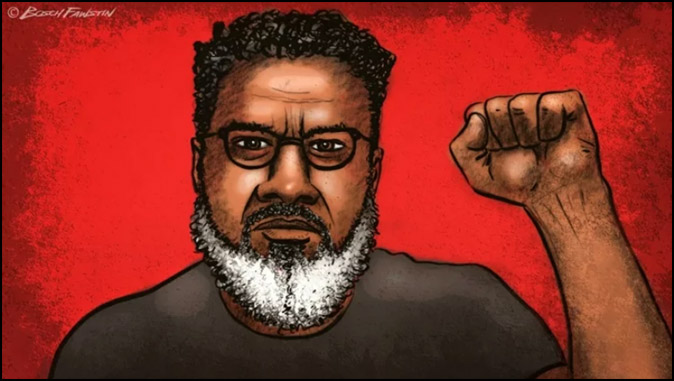 Racist Mayor: Mondale Robinson
“They would have you believe that some white people aren’t racist”.
By Daniel Greenfield

Mayor Mondale Robinson claims that “white supremacy made me this person” and vowed to fight “this infection that we call white supremacy” in Enfield, North Carolina: an 85% black town.

Somehow the 11% of white people in a town with a black mayor are still oppressing everyone.

“They would have you believe that some white people aren’t racist,” he complained.

Despite a population of only around 1,800 people, it has a murder rate on par with one of those English villages where eccentric PBS detectives try to figure out why everyone is dying.

At one point it had a murder rate higher than 90% of the nation’s cities.

The fallout from the quadruple murder of two elderly couples who were killed while playing cards in a nearby area is still playing out with little progress after three of the suspects were released. August saw a fatal park shooting and in July, another Enfield man broke into another elderly woman’s home and sexually assaulted her. But that is just how things play out in Enfield.

While Mayor Mondale Robinson has shown limited interest in violent assaults against other town residents, especially white ones, he demanded that the governor declare a “state of emergency” and save him from what he called “domestic terror threats”.

These “domestic terror threats” appear to consist of nasty letters.

People in Enfield are being assaulted with no recourse, but when Robinson gets a letter, he demands that the state governor declare a state of emergency.

Local station WRAL TV reported that Enfield is a “town without police officers” with no police working on weekdays. An official bulletin warned that the town would have no police officers working for the rest of September’s weekends. This was helpful news for the criminals in a town where there are an estimated 85 crimes per square mile.

In response, Robinson claimed that not having a police department wasn’t unusual, accused the news station of “trying to create discourse and chaos” and warned that in the town “folk done read books”. In another attack on the news station, he claimed that it was “continuing this narrative that I am the angry black man”.

The activist mayor is as engaged with his own sense of fragility as he is disengaged from the safety and welfare of the rest of the people living in Enfield. And while he complains about what he alleges is a racist justice and police system, his concern over his own wellbeing teeters into authoritarian fascist rhetoric about states of emergency and security.

When Will Michaels, a white hipster public radio reporter, came down to interview him, Robinson claimed that he was being threatened by the KKK and warned that “My team definitely ran the papers on Will Michaels before he came to Enfield”.

From anyone else this would be considered intimidating the press, but the media just keeps cheering the founder of the Black Male Voter Project. And ignoring his crazy racist tirades.

As the former political director for Howard Dean’s Democracy for America whose Black Male Voter Project was backed by the Hive Fund, itself backed by Amazon founder Jeff Bezos, and the Rural Democracy Initiative, backed by Soros, the perennial victim had his path to power lubricated by billionaires.

These connections ensure that Robinson continues to receive fawning media quotes, including in a recent New York Times column by Charles Blow which describes him only for his Black Male Voter Project work. The paper doesn’t seem to know Robinson is a mayor and sometimes he doesn’t seem to know it either. He hasn’t even updated his Facebook page.

After the Rittenhouse verdict, Robinson attacked “white America” and falsely claimed that “Justice systems is only designed to preserve whiteness”. Everyone in the Rittenhouse case was white. The justice system in Enfield, after its white police chief left in protest over Robinson’s lawless actions, seems to exist to preserve a state of lawlessness.

The worst murder spree in Enfield, that of James and Janice Harris, and James and Peggy Whitley, all white, remains unpunished after three of the black suspects in the case were freed.

James’ granddaughter described “coming up those steps to seeing the door open about a foot, glass busted out everywhere, chairs turned over, and their lifeless bodies scattered on the floor.”

Bloody handprints were left on the cards they were holding when they were murdered.

But Mayor Robinson is still hunting for racism everywhere except inside his own head.

“Asking for a resume or cover letter is not only outdated, but it’s also rooted in racism,” he alleges. He rants that “I served and survived Paris Island Marine Corps basic training and was brave enough to tell them it was racist”.

Interspersed with that are the badly misspelled leftist Twitter rants that connect to white people.

Mayor Robinson ranted that Bill Maher “is not called racist or islamophobia (sic)” because of “America’s whiteness”.

He complains that “Republicans want a sis-gendered (sic) heavily gunned society which over police black people”. And even when Will Smith slapped Chris Rock, Mayor Robinson objected that the LAPD hadn’t questioned the movie star. “Black men are f____ people too.”

Were James and Janice Harris, and James and Peggy Whitley people to Mayor Robinson?

Some sites calculate the chances of becoming a victim of violent crime in Enfield as 1 in 57. The town has a murder rate of 1 per 1,000 people and an assault rate of 14 per 1,000 people. At least no one is being “overpoliced” in Enfield, though it hasn’t stopped Robinson from claiming that the police aren’t doing enough to protect him from the phantom empire of the KKK.

For the head of a town government, Robinson’s social media feed is refreshingly free of town business. Instead he dedicates it to rants about national politics and victimhood tirades. Not to mention attacking anyone who questions him on Facebook or asks him to stop his tantrums. He even complains of being ‘blocked’ or prevented from posting on local Facebook groups.

While Robinson finds the time to complain about ordering a coffee table from Pottery Barn and his ugly ruined wallpaper, he doesn’t seem particularly engaged with actually fixing his broken town. Like other celebrity black nationalist activist mayors of broken hellholes, including Mayor

Khalid Kamau of South Fulton, GA and Mayor Chokwe Antar Lumumba of Jackson, MI, he seems much more intent on booking lefty media to talk about the evils of whiteness.

And when his black constituents complain, Robinson denounces them as agents of white people. “Some of y’all would sell out your own mother if you thought it would get you closer to being accepted by whiteness” and “If you quit a job because someone confronts white supremacy then you too may be an actor of oppression, regardless of your race.”

“When you come at the system be prepared to be ignored until they cant. Prepare to be made the butt of jokes until no one laughs. Prepare to be demonized and made to be unstable until ur sanity is proven. Prepare to be attacked &cut off by all those who agree with white supremacy,” he posted.

No one in Enfield is laughing. There’s nothing funny about living under Mondale’s rule.

Editor’s note: This is the 15th part in Frontpage Mag’s series on Racist Mayors. Stay tuned for more installments.