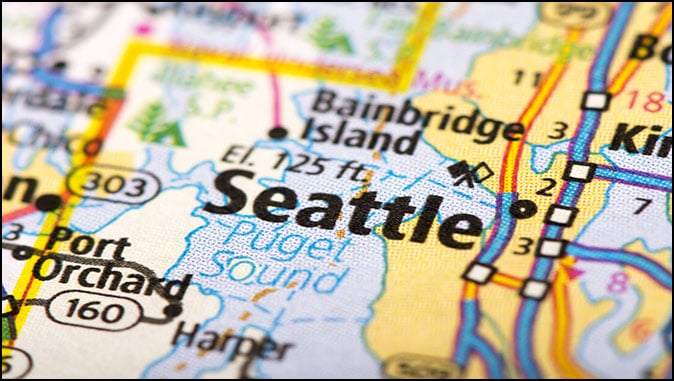 Editor’s note: This is the 9th part in Frontpage Mag’s new series on Racist Mayors. Stay tuned for more installments.

On the same day the online whites-only training session was held, Seattle’s Mayor Jenny Durkan declared that the infamous Capitol Hill Autonomous Zone occupation outside the Seattle Police Department’s abandoned East Precinct, organized by Black Lives Matter activists, “could be a summer of love.” Durkan took about ten days to begin bringing the occupation to an end, when she finally realized that her fantasy of “a summer of love” was turning into the reality of nights of violence. Yet Durkan did not budge in defending her city’s racially segregated training.

Durkan attacked the Trump administration for raising concerns that the segregated training was potentially a violation of federal civil rights laws. She claimed that separating training sessions for city employees by race was somehow anti-racist. “In the midst of a nationwide reckoning with systemic racism and police violence, (the administration) is considering suing the City of Seattle for a training we provide that specifically seeks to combat racism and advance equity,” Durkan said.

The content of the training materials that Durkan defended did not combat racism. They did the opposite. They exacerbated racial division.

The e-mail inviting “city employees who identify as white” to their own separate training session said, “We’ll examine our complicity in the system of white supremacy…and begin to cultivate practices that enable us to interrupt racism in ways that are accountable to Black, Indigenous and People of Color (BIPOC).”

The separate training session for “city employees who identify as a person of color” was focused on how “American conditioning, socialization and history leads People of Color to internalize radicalized beliefs, ideas and behaviors about themselves, under girding the power of White Supremacy.”

For example, one of the powerpoints used for a city employee training session was entitled “Internalized Racial Oppression.” Individualism was among the twelve racial attributes listed under a column labeled “Internalized Racial Superiority.” Employees in Mayor Durkan’s City Hall were being indoctrinated to believe that wanting to be free to express one’s individualism, a core value in America’s founding documents, is one of the defining characteristics of a white supremacist. Other racial characteristics listed in the racial superiority column include perfectionism, arrogance, silence, intellectualism, control, and comfort. Violence is also listed in the “Internalized Racial Superiority” column.

Another column in the powerpoint is labeled “Internal Racial Inferiority.” Evidently, according to the racists who developed this training material, people of color – not whites – have internalized addictive personalities, as well as feelings connoting an inferiority complex such as shame, self-doubt, self-hate, and apathy. Rage is also listed in the “Internal Racial Inferiority” column.

But wait – there may be some hope for white persons who follow the training materials’ path of redemption. Whites are instructed how to interrupt their “whiteness.” They must first come to understand their “complicity in racism” and then take on the responsibility to serve as “social justice advocates and organizers.” This includes bringing other unenlightened white people “into racial justice.”

Seattle is engaged in an ideological battle against what its political leaders see as the systemic effects of white supremacism. This battle is being fought under Mayor Durkan’s leadership throughout the city’s bureaucracy. And Durkan has a plan to begin undoing the accumulated harms allegedly suffered by blacks especially, for which whites as a race are collectively guilty according to Durkan and other leftwing progressive racists.

Durkan wrote an article published by the South Seattle Emerald on September 25, 2020 in which she described her plan to use taxpayers’ money for multimillion dollar investments solely to benefit black, indigenous and people of color (BIPOC). Durkan concluded her article by declaring that “We can show the country what it means to invest in Black Lives Matter and embark on something big together.” There’s nothing like investing taxpayers’ hard-earned money in a Marxist, anti-nuclear family, racist hate movement, led by people who have spent donors’ money on their own personal luxuries.

Mayor Durkan’s original $100 million proposal was cut to $30 million by the Seattle City Council. Working with this special reserve designated solely for black, indigenous and people of color communities, Durkan convened the Equitable Communities Initiative Task Force last October for the purpose of recommending how to make exclusive investments in these communities. On June 3, 2021, after a series of meetings closed to the public, the task force submitted its investment recommendations to Durkan “to build an equitable society.”

Undoing past discrimination and its lingering effects by excluding whites today from publicly funded benefits because of the color of their skin is racist. Some of the money used to fund Seattle’s BIPOC community investment programs is being taken from other city departments working on behalf of all Seattle residents, including millions of dollars from the Seattle Police Department.

Seattle experienced a dramatic increase in homicides during 2020 – its highest in 26 years. Seattle has one of the highest crime rates overall in the country. It is reportedly safer than only 4% of U.S. cities. To her credit, Mayor Durkan did not want to go as far as the more radical City Council in seeking to defund the Seattle Police Department. However, she did issue an executive order in 2020 “ordering City departments to support the citywide, community-led process to reimagine policing and community safety by centering the voices of Black, Indigenous, and People of Color communities.” Durkan has accused the police department of “police violence” and has irresponsibly restrained the police’s ability to stop the real violence in the streets.

Seattle is yet another city run into the ground by a far-left progressive mayor. Mayor Durkan has put critical race theory ideology above her responsibility to manage her city for the benefit of all the people of Seattle. Durkan has decided not to run for re-election. The bad news is that the next mayor of Seattle is likely to be an even more extreme leftwing progressive racist who wants to dismantle the Seattle Police Department and expand the racialized community investment programs.