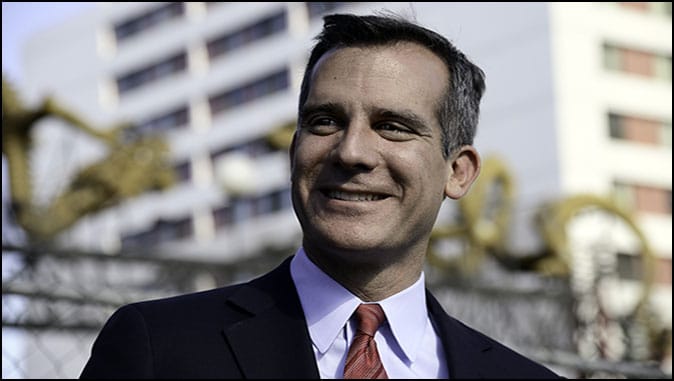 Editor’s note: This is the second part in Frontpage Mag’s new series on Racist Mayors. Stay tuned for more installments.

President Joe Biden is reportedly considering the Democratic Mayor of Los Angeles, Eric Garcetti, to serve as the next U.S. ambassador to India. Garcetti should feel right at home in India, where the huge homeless population will remind him of the homeless crisis in L.A. that has spun out of control under his watch. If Garcetti ends up with the ambassadorship, don’t be surprised if many Angelenos thank Biden for relieving them of their failed leftwing progressive mayor.

Homicides in Los Angeles rose 38 percent last year, according to Los Angeles Police Department (LAPD) statistics, reaching their highest level in over a decade. Homicides have continued to rise in L.A. this year without letup. “Then, as now, the L.A. neighborhoods hardest hit by the violent crime increase were predominantly poor, Black, and Latino,” Jason McGahan reported in Los Angeles Magazine.

Despite the rising criminal violence besetting his city, which especially hurts people of color, Mayor Garcetti caved to pressure from Black Lives Matter activists. Last year, Garcetti proposed cutting the LAPD budget by approximately $150 million, which was more than half of the total budget cuts he had proposed.

“Prejudice can never be part of police work,” Garcetti said. “It takes bravery to save lives, too.” This is an insult to the vast majority of good cops who put their lives on the line every single day to serve their communities. Blue lives matter, too.

Garcetti also endorsed the candidacy of an anti-police white progressive to serve as Los Angeles District Attorney, George Gascon. With Garcetti’s support, Gascon beat the incumbent, Jackie Lacey, who was the first African American and woman to serve in that position. After Garcetti withdrew his original endorsement of Lacey and switched his allegiance to Gascon, Lacey said that “everybody’s trying to prove that, you know, that they’re not racist. Unfortunately, that’s been translated into ‘Who’s the more progressive candidate? What’s the more progressive stance?’”

Mayor Garcetti’s final choice for Los Angeles District Attorney pursued radical progressive policies that put criminals’ interests first. Gascon’s “social justice” war against law enforcement ignored the concerns of victims and their families who are disproportionately people of color. Gascon’s policies have endangered the public safety of minority communities most of all. No wonder Gascon is currently facing a recall challenge launched by crime-victim families. The racist impact of Gascon’s criminal-first policies is plain to see. But instead of admitting that he made a mistake in endorsing Gascon over Lacey and deciding to openly support the recall drive, Mayor Garcetti has remained silent.

David Horowitz, whose Freedom Center publishes Frontpage Magazine, has written a book entitled Progressive Racism in which he described how progressives have turned the original civil rights movement to combat real racism into a racist movement of its own.

Mayor Garcetti fits the description of a progressive racist to a tee. “If there’s one thing that the demonstrations for racial justice have done,” Garcetti said, “it’s to lay bare the urgent and overdue demands and structural racism and to right the wrongs of the past.” Garcetti’s way of righting the racist wrongs of the past is to commit more racist wrongs in the present.

In January 2021, Mayor Garcetti announced that the City of Los Angeles would require all its employees to undergo “implicit bias” training as part of an effort to achieve “racial justice.” Deputy Mayor Brenda Shockley, whom Garcetti also named as Los Angeles’ first-ever Chief Equity Officer, added her two cents in defense of the new indoctrination program. “Addressing implicit bias at the level of the individual is important and necessary to a meaningful and productive conversation about race,” she said.

Los Angeles decided to use “implicit bias” training materials developed by Ohio State University’s Kirwan Institute for the Study of Race and Ethnicity. Employees will be required to complete their indoctrination by the end of 2021 and continue to endure the indoctrination on an annual basis.

The Kirwan Institute has received funding from leftwing George Soros through his Open Society Foundations. The institute’s senior legal analyst, Kyle Strickland, has openly espoused the tenets of critical race theory. “The racial disparities and inequality that we see today,” Kirwan Institute’s senior legal analyst wrote, “are linked to our country’s legacy of slavery, white supremacy and systemic racism – the compounding harms of racist and discriminatory laws, policies and norms that create and maintain power for white society at the exclusion and exploitation of Black people and other marginalized groups.”

Here is an example of what Kirwan Institute has to offer in its progressive racism curriculum, which appears in its workbook about “implicit bias in K-12 education.” Evidently, according to one of its hypothetical scenarios, a well-meaning high school teacher was potentially guilty of implicit bias when he expected a Hispanic “undocumented” student to arrive for class on time like all his other students do. This student was the only one who was constantly late, disrupting the class in the process. In the hypothetical, the teacher also criticized this particular student on at least one occasion for being too loud and dramatic during an argument the student was engaged in while in class. The student felt stereotyped and unfairly treated in comparison to her white classmates, a feeling shared by other Latino students at the school.

Presto! Racism in the form of implicit bias must be afoot in this school. Hurt feelings, not the actual facts, are the end of the story, so long as they are expressed by someone belonging to what progressives consider to be an “oppressed” racial or ethnic group. It doesn’t matter if the teacher’s intent was to teach personal responsibility and to expect the same standard of good behavior from all of his students. The Kirwan Institute’s twisted training is based on the principle of progressive racial and ethnic preferences.

Mayor Garcetti also is promoting “racial equity” within city government and is strongly encouraging local businesses to do the same. “Our city is hungry for change, and we must knit racial justice and affirmative action into the fabric of our policies, our institutions, and our society,” Garcetti said, burnishing his progressive racist credentials.

Garcetti signed Executive Directive 27 in June 2020, which requires Los Angeles City departments to develop specific racial equity action plans and to designate their own racial equity officers. The directive also aims to develop affirmative action plans covering a broad range of racial preferences throughout the Los Angeles city government, including everything from hiring to contracting. “In the absence of thoughtful affirmative action programs, longstanding racial and gender stratification has persisted and deepened,” the directive said.

In order to achieve his affirmative action ambitions, Garcetti campaigned for the repeal of the existing voter-approved Proposition 209 (1996) banning affirmative action in California’s public sector. Proposition 209 prohibits the government and public institutions from discriminating against or granting preferential treatment to persons on the basis of race, sex, color, ethnicity, or national origin in public employment, public education, and public contracting. By a large margin, a majority of California voters said no to repealing this ban on affirmative action. They didn’t buy the progressive dogma that requiring the government to be color-blind and race neutral in its policies and practices is racist.

In his 2021 State of the City address, Mayor Garcetti described his latest proposed budget as “a roadmap to a city built on justice and equity.” He boasted that his “justice budget” was arguably the “most progressive of any big city anywhere.” To prove his point, Garcetti said that he wants to “push toward creating a pilot slavery reparations program for Black Angelenos” on a scale that he claimed has never been tried before.

Mayor Garcetti’s city is crumbling around him. Angelenos are voting with their feet to escape the mess that Garcetti has made worse with his leftwing policies. The mayor’s answer is to create even more disastrous programs promoting progressive racism that divide the city by race and ethnic background. Garcetti has joined the rogues’ gallery of big-city Democratic mayors who have failed their constituents.