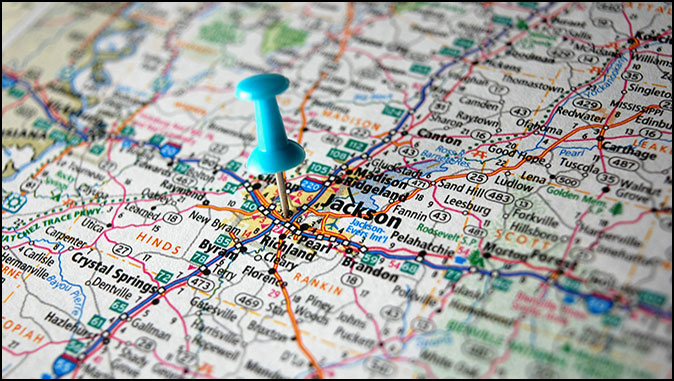 Editor’s note: This is the 8th part in Frontpage Mag’s new series on Racist Mayors. Stay tuned for more installments.

Mayor Chokwe Antar Lumumba ran for office promising to make Jackson, Mississippi, “the most radical city on the planet.” The son of a radical father who had declared himself a leader in the Republic of New Afrika, a separatist black nationalist breakaway country located in Mississippi and four other states, Lumumba was eminently qualified for the job of radicalizing Jackson.

The Republic of New Afrika, a racist secessionist black supremacist terrorist group, had not had much luck getting Mississippi or even Brownsville, Brooklyn to secede from the Union, but Chokwe Lumumba Sr. finally managed to get elected mayor of Jackson. That was some years after the RNA’s plan to begin its secessionist racial republic in Jackson collapsed after a shootout that killed a local police officer and sent the president of the new republic to prison.

But not before the founders of the RNA “fell to the ground in such profound joy that they began to eat the dirt.”

After being elected, Lumumba Sr. kept using the RNA’s “Free the Land” slogan. But who was it being freed from? The remaining white people were fleeing Jackson by the thousands. Lumumba and the elderly figures in the RNA kept planning some sort of socialist cooperative economy, but a year after being elected he died of a bad cold, and his supporters claimed he had been murdered. Three years later, Chokwe Antar Lumumba took his father’s place vowing to transform the capital of Mississippi and its 160,000 citizens: down 13,000 from a decade ago.

“I plan to make Jackson, Mississippi the most radical city on the planet,” Chokwe Antar Lumumba told a cheering crowd while his supporters chanted, “Free the land!”

“By any means necessary,” Mayor Lumumba responded with RNA’s secessionist slogan, and concluded his speech with Karl Marx’s quote, “We have nothing to lose but our chains.”

But it would turn out that people in Jackson had plenty to lose.

A few months ago, the water went out in the city for a month after a winter storm wrecked the decaying infrastructure.

Mayor Lumumba blamed it on white people. “I do think that if we’re being honest, it’s a matter of race.”

Except that black Democrat mayors have run Jackson for the last 25 years. The city had been repeatedly warned that its water system was going bad, that it wasn’t being maintained, and that there was no money because residents weren’t paying their water bills. While Mayor Lumumba was chanting black power slogans and pushing socialist pipe dreams, the basic infrastructure of pipes that made life possible was coming apart on the land he claimed to love so much.

While people spent weeks hauling water in buckets to flush their toilets and boiling water when they did have it, the media turned on the outrage and blamed racism, but no one asked the socialist black nationalist mayor why he let it happen. Or why he kept promising radical change for years while pregnant women and children were told not to drink the water in Jackson.

Meanwhile the water treatment facilities were only being staffed at 50%.

While Lumumba was planning a socialist makeover for the city, the actual civic infrastructure was being neglected because it was much less glamorous than socialist cooperatives.

Murders had shot up 50% from 2019 to 2020 leading to the deadliest year on record. The most radical city on the planet also had one of the highest murder rates in the country.

A local news station reported that someone was being shot or killed on average every 31 hours.

The victims and their families hadn’t lost their chains, they had lost their lives.

When the BLM race riots began, Mayor Lumumba declared, “we must dismantle the systems that have historically oppressed us.” What exactly these systems were was left unsaid since black Democrats had been running Jackson for a generation, but Lumumba insisted that they were “still grappling with the trauma of hundreds of years of systematic oppression.”

But in a more recent episode of systemic oppression, two dozen of the city’s officers sued him for discriminating against them based on their race, gender, and sexual orientation.

The lawsuit claimed that Mayor Lumumba had used $200,000 from the police budget for four bodyguards and an SUV motorcade. Sometimes “systemic oppression” is a necessity.

Last month, 6 people were killed in 24 hours in Jackson.

The Republic of New Afrika is really taking off. But the killing sprees, the collapse of the water system, and most of Lumumba’s plans haven’t stopped him from winning a second term.

The black nationalist activist has the backing of the Rockefeller Foundation and various other lefty foundations. He’s been touted by Senator Bernie Sanders and The Nation. And so he won 13,160 votes in an election in which barely a tenth of the city even bothered to vote.

Fewer people bothered to turn out for the general election than the Democrat primary.

And so the hallway to the mayor’s office with the portrait of Communist Patrice Lumumba will remain the way it is. So will the rest of the dysfunction in the Republic of New Afrika.

“America is infected with a disease and that disease is called racism,” Mayor Lumumba, the son of a black nationalist who served as a public official in a secessionist racist state, told MSNBC. “The idea of ‘Make America Great Again’, we don’t see a country that has gone wrong, in my opinion we see a country that has never been right.”

Jackson isn’t just leading in the number of murders or the undrinkable water. It’s also ranked as the second highest city in the country for sexually transmitted diseases. The Lumumbas finally got their Republic of New Afrika and instead of creating a new utopia, it turned out to be another hellhole run by leftist Democrats just like all their other failed cities scarring America.

America isn’t suffering from racism: Democrats are. Racist Democrats destroy cities and then claim racism. They neglect the most basic services in favor of their ideology and blame racism. They wreck black communities, tout criminals, terrorists, and racial separatists, and then blame racism when the racism is looking right back at them from the broken pipes and bloody streets.

The “most radical city on the planet” is as infected with racism as with STDs.