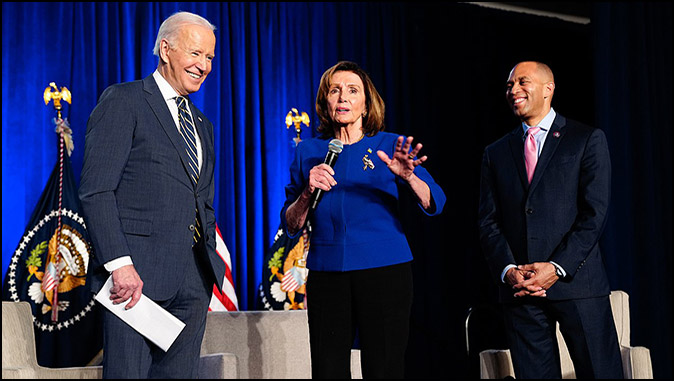 Race-Hustlers are the Democrat Party
The sooner the GOP gets this basic fact – and runs the House accordingly – the better.
By Derek Hunter

There are certain moments when partisanship is put aside and the ceremony is respected. It’s what decent human beings do – they put animosity and disagreement aside for the moment and focus on the moment. You see it in applauding the entrance of the President of the United States to deliver the State of the Union Address. Do you think everyone wants to stand and applaud? They do it out of respect for the office and the event, not the person. Leave it to Democrats to, well, be Democrats and be the complete guttersnipes they are the rest of the time when decency dictated they simply be normal human beings for a few minutes.

I’m speaking about the election of Kevin McCarthy as Speaker of the House and the garbage person Democrats elected to be their leader, Hakeem Jeffries, and his speech “congratulating” McCarthy on his victory.

The media, naturally, lined up to treat Jeffries like he was special because of the color of his skin. He’s not special for any reason, the least of all is his skin. A box of dog excrement wrapped in silk is still a box of excrement. Democrats, every last one of them, are that box of excrement.

Of course, I’d be remiss if I didn’t point out one of the left’s largest, most dense piles of dog excrement: Cori Bush. Bush, a proud defender of the party of slavery and segregation, seems to spend an inordinate amount of time trying to corral black people who dare stray from what Democrats deem “acceptable thought” so they “know their place.” Democrats love this, or at least sure seem to since they do it all the time.

“FWIW, @ByronDonalds is not a historic candidate for Speaker. He is a prop,” Bush tweeted. “Despite being Black, he supports a policy agenda intent on upholding and perpetuating white supremacy.” Donalds was nominated for the Speakership by Congressman Chip Roy, who pointed out the historic nature of having 2 black men nominated to lead the House at the same time. Bush knows her job and gleefully sent out a message that could’ve easily been found in the KKK’s Twitter feed were social media around 100 years ago. Now the media covers it with headlines like, “Cori Bush remarks put the spotlight on the issue of race in Speaker’s fight.” Not a “spotlight,” more like the flickering light from a burning cross…

Not a single Democrat said anything critical of the racist remarks because they, too, share the belief that Democrats still own black people. Democrats have always been the party of segregation and bigotry; they have never changed their objectives, only their tactics. Harsh? Is the truth harsh? What is saying Donalds “supports a policy agenda intent on upholding and perpetuating white supremacy”?

I’d suggest anyone who thinks it is harsh take a look at Bush’s district in east St. Louis and ask yourself how well the black residents of Missouri’s first district have done with their blind loyalty to Democrats since 1949. It’s a pit and Bush is a worthless Congressional Representative who spends her time defending the party and using taxpayer dollars to buy herself security while the bodies of her constituents pile up. Then again, she won reelection with 78.8%, so it’s hard to care about the stupidity people unleash on themselves.

Anyway, back to Jeffries. His racism is better shielded, he had national leadership aspirations, after all. But him being the exit port on the human body for fully digested food is not shielded; it’s an asset with his party. And it was on full display when the Speaker vote was finalized early Saturday morning.

At a moment where simply being polite was called for, and tradition, Hakeem decided to channel his racist uncle, CUNY professor and former chair of black studies at City College of New York, Leonard Jeffries (this guy is a chunk of that post-digested food I was talking about who hates himself some Jews and white people, which the media, of course, portrayed as “provocative.” Such scum). At a moment for the country, Jeffries made it about him and his party. He smeared half the country because he could and because his rabid base demands it. No one should ever work with this man or show him any respect, Member of Congress or civilian.

To hell with all of these people. The greatest gift Donald Trump ever gave Republicans was showing the effectiveness of having content in the front of their underpants, and not in the back. Having that post-digested food scared out them was how Republicans acted for far too long, the descending of that front underpants content showed the GOP’s history of taking a punch to the nose, then apologizing for hurting the fist of the person who hit them, was no way to live.

I’ve said it before, and I’ll say it again – all the high road gives you is a nice view of your defeat. To hell with all of them. Shut them out, shut them down. There is no difference between any of them – worker bees are indistinguishable from one another and all need to be treated the same way. They will never be reasonable, they are incapable of even being decent. Do not pretend otherwise.

Race hustlers and scumbags don’t lead the Democrat Party, they are the Democrat Party. There aren’t frauds in there, the entire existence of the party is based on fraud. There are no “good Democrats” any more than there were good communists in the Soviet Union or China or good Nazis in Germany. The left is the left, only their tactics change. The sooner Congressional Republicans recognize this and run the House accordingly the better.