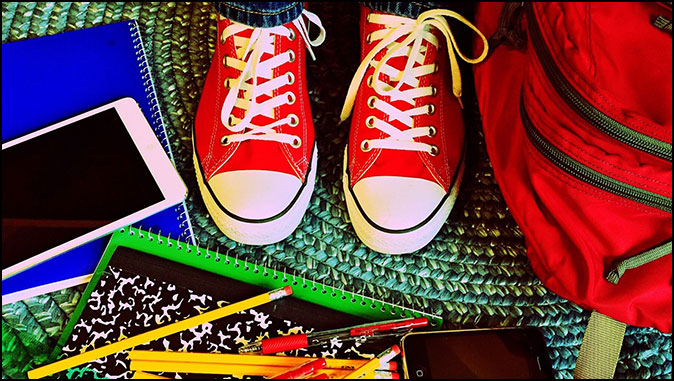 President Trump Can Use the Crisis to Dramatically Transform Education
Taxpayers are spending billions on schools and teachers who won’t teach.
By Daniel Greenfield

The Los Angeles Unified School District spends $18,788 per student. Its goal is to up that spending to $20,000. The mammoth LA school district is 7th in urban spending and has around half a million students. And the costs only went up after a United Teachers strike extracted a 6 percent raise.

Governor Newsom demanded federal aid during the coronavirus and proposed moving over $4 billion in federal pandemic relief to the non-functioning schools.

“Cuts to funding at schools will forever impact the lives of children,” Superintendent Austin Beutner warned. “The harm children are facing is just as real a threat to them as is the coronavirus.”

Apparently cutting the budgets of closed schools is just as lethal as a pandemic.

“The notion that schools can continue to operate safely in the fall with a decreased state budget is not realistic,” deputy superintendent Megan Reilly complained after a proposed 7% budget cut.

The schools are aren’t opening in the fall. Instead, LAUSD is staying closed. But it has piled up $200 million in “emergency coronavirus costs” from handing out free computers and internet.

What are those billion-dollar budgets buying now?

The Zoom classes managed to have only two-thirds of students logging in on any given school day. 40,000 high school students were not participating after school closures. That’s not surprising because the teachers’ union had reached an agreement that would avoid any pay cuts, would allow teachers to set their own schedules, free them from video lectures, and require them to work only 4 hours a day.

Meanwhile millions are being spent on protective equipment, not because LAUSD schools are teaching students, but because they’re open only to illegally use federal funds to serve food to the homeless.

And the situation at LAUSD is typical of the broken Democrat school model across the country.

It’s bad enough when taxpayers and parents were stuck with billion-dollar bills when there were at least functioning schools. Now struggling families are paying a fortune to subsidize Democrat activists who make their own schedules and might condescend to spend a few hours handing out class projects.

Don’t ask them to turn on their video or actually monitor the students they’re “teaching”.

“If schools aren’t going to reopen, we’re not suggesting pulling funding from education, but instead allowing families … take that money and figure out where their kids can get educated if their schools are going to refuse to open,” Secretary of Education Betsy DeVos suggested.

That suggestion has been met with howls of outrage from the teachers’ unions. How dare the country’s top education official suggest that education funding should be used to teach children.

Under the current regime of pandemic closures, the entire system of school districts makes no sense.

If students are going to be taught online, then their geographic location only matters when they hit a time zone change. The massive burden of property taxes on local homeowners that has been used to fund the public education system through sweetheart deals with union activists has no reason to exist.

Those contracts were for teachers who showed up in classrooms to teach students. Democrat activists have negotiated with Democrat politicians to pay them a fortune to only occasionally teach online.

That’s not a good deal for anyone except the unions and the Democrat officials they’ve bought off.

Secretary of Education DeVos is correct. Education funding is meant to fund education, not homeless soup kitchens, which LAUSD considers more essential than functioning classrooms. That money doesn’t belong to unions or political bosses. It was extracted from taxpayers through a broken promise.

Parents have the right to pull that money from school districts and use it to educate their children.

That can mean finding private schools that are willing to open up for in-person learning, it can mean competitive distance learning at private and public schools around the country, or it can mean homeschooling through pods. Or any learning that meets curriculum requirements.

The public education system was broken badly before. Now it effectively doesn’t exist.

The system, at every level from elementary through college, has shed what few standards it had, while maintaining ridiculously inflated expenses of tens of thousands per student for teaching zoom classes.

Competitive alternatives could easily offer individual students more instruction time, more access to teachers, and more personalized instruction for a fraction of the money that is being spent today.

School districts react hysterically to both budget cuts and proposals to reopen. But they can’t have it both ways. They protest that the infrastructure must be maintained, even as they insist that they have no idea when they’re going to be able to use it again. They argue that, unlike every other profession, it’s vital to keep teachers employed, even when they’re really not doing anything useful.

While so many people who want to work are losing their jobs, why should some government employees who won’t do their jobs be immune from economic realities because of their political power?

The answer is political corruption.

Municipal unions have gotten away with murder because they’ve had their fingers on a vital service. Mess with them and they can turn out the lights, stay home when the fires break out, or force you to keep your kids entertained at home. Pandemic closures have entirely neutered that last threat.

The pandemic emergency has created an education emergency. And the public school system is unable and unwilling to meet that crisis because of its cronyism, corruption, and general incompetence.

President Trump has the opportunity to help parents meet that education emergency by taking executive actions that will empower private schools, homeschoolers, and the more functional elements of the public school system to step forward and competitively meet the needs of students and parents.

The public health emergency has created an education emergency that President Trump can solve.

If a public health emergency can be used to confine millions of people in their homes, to close countless businesses, to suspend the Bill of Rights, and even to ban husbands and wives from sharing a bed, it can certainly be used to redirect education funding from systems that aren’t teaching to those that are.

It’s either that or go on giving billions to broken districts like LAUSD where the teachers might show up for 4 hours of work and some of their students might occasionally tune in to do the work.

In the old public school system, teachers pretended to teach and students pretended to learn. Now no one is pretending anymore. The teachers aren’t teaching and the students aren’t learning. The big expensive buildings are standing empty, the school supplies are going unused, and the endless layers of administration serve no function except to draw six figure salaries. It’s time to end the charade.

The billion-dollar boondoggles were not created to maintain themselves which is all they’re doing now.

America’s students deserve better. So do the taxpayers who have funded this mess. The public education system has shut itself down. It’s time to build a new flexible system that can handle the stresses of the pandemic and deliver results without holding students and parents hostage to unions.

President Trump can take the first step by breaking parents and students free of broken districts and shuttered schools by putting federal education funds at the disposal of parents during this emergency. Voucher programs have already been successfully implemented in many states, especially in districts with underperforming schools, and a pandemic voucher program would offer flexibility and results.

Parents would be able to enroll their children in the distance or in-person learning options that work for their families. A competitive educational environment would adapt to the challenges much more readily and provide better value for students. And the failing public school system would have an incentive to improve. The alternative is wasting billions on schools and teachers who refuse to teach their students.

Leftists Exploit Violence to Cancel Conservatives By Laurie Higgins This is how it’s going down,…

Solving the Vaccine Crisis By Betsy McCaughey Originally Published by the Gatestone Institute. Americans are…

After Conservative Deplatforming, Purge Moves to Ham Radio By Daniel Greenfield The two things about…