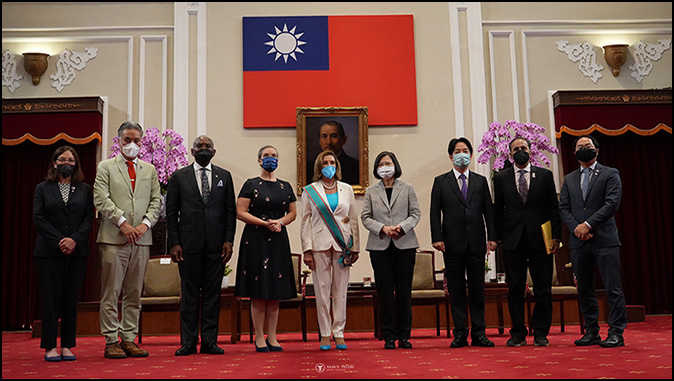 Pelosi: People Are Angry That I Went to Taiwan
And it’s just because she’s a woman?
By Robert Spencer

House Speaker Nancy Pelosi (D-Ketel One) has left Taiwan, but tensions are still high. According to Newsweek, “Nicholas Burns, the top American envoy in Beijing, received a late-night summons followed by a dressing-down from a senior Chinese diplomat over Washington’s failure to block the House speaker’s plans.” Xie Feng, a vice foreign minister for the People’s Republic, “lodged stern representations and strong protests” with Burns.

According to the Chinese propaganda organ Xinhua, “Xie said the U.S. government must be held accountable.” As far as Pelosi herself is concerned, however, all this saber-rattling has a simple explanation: her critics, she claimed Wednesday, are just sexist. Of course! How could we ever have thought that every last detail of life didn’t fit into the Left’s worldview, in which everything, literally everything, is either racist, sexist, or both?

Xinhua’s report added that Xie “said the U.S. government has indulged rather than restrained Pelosi’s willful act, leading to the escalation of tensions across the Taiwan Strait and seriously undermined the China-U.S. relations.” Newsweek noted that “the Chinese military began to mobilize after Pelosi, the highest-ranking U.S. official to visit Taiwan in 25 years, landed on Tuesday, with China announcing plans to conduct military exercises around the island that prompted concerns among Taiwanese officials.”

The Chinese Communists are ratcheting up tensions over Pelosi’s visit because they claim Taiwan as their own, and Pelosi, contradicting the appalled appeasers among Biden’s handlers, declared in Taipei that she was there to make it “unequivocally clear” that the U.S. would “not abandon” Taiwan. “We are proud of our enduring friendship,” said the vodka-soaked speaker. “Now more than ever, America’s solidarity with Taiwan is crucial and that is the message we are bringing here today.”

The ChiComs have also chosen Pelosi’s Taiwan junket as a pretext for their rage because they see that they can. Old Joe Biden’s president act is wearing thin, America is crippled by misrule, corruption, and division, and Xi Jinping would have to be deaf, dumb, and blind not to see now as a time to take advantage. And so, Newsweek reported, “the Chinese military announced live-fire exercises and missile tests in six locations around the island, including in zones overlapping Taiwan’s territorial sea and airspace, to be held Thursday through Sunday.” Pelosi’s trip gives them an excuse to encroach on Taiwanese maritime territory and airspace, and what is President Double COVID going to do? What can he do?

The ChiComs want him to act. Xinhua said: “Noting that the U.S. side shall pay the price for its own mistakes, Xie urged the U.S. to immediately address its wrongdoings, take practical measures to undo the adverse effects caused by Pelosi’s visit to Taiwan.” In other words, shoot them some concessions, a few billion, maybe, or practical steps to abandon Taiwan, and all this tension will go away.

Amid all this, Pelosi, who is now 82 and a knee-jerk, doctrinaire Leftist to the end, has claimed that it’s all really about sexism: “They made a big fuss because I’m speaker, I guess. I don’t know if that was a reason or an excuse because they didn’t say anything when the men came,” Pelosi declared. She was referring to the fact that back in April, Sens. Lindsey Graham (R-When It’s Convenient), Bob Menendez (D-Kyiv), Richard Burr (R-N.C.), Ben Sasse (R-Impeachment), Rob Portman (R-Yawn), and Ronny Jackson (R-Texas) visited Taiwan.

Pelosi should have stuck with her first response, as none of them are Speaker of the House, and none of them have Pelosi’s platform or influence. What’s more, the Biden administration is deteriorating so rapidly that April is a long, long way from August, and four months ago, the ChiComs didn’t have nearly as much reason as they do now to see this as a time to be more aggressive than ever and to squeeze Washington as hard as they possibly can, before a government that is remotely sane and competent returns (if indeed it ever does).

But Pelosi is a classic example of a man (sorry! a woman) who has nothing but a hammer and sees every problem as a nail. She doesn’t see the brouhaha over her Taiwan trip as a sign of the Biden administration’s appalling weakness on the global stage or as an indication that the U.S. military should cut out the wokeness and start concentrating on figuring out how to win wars. Instead, it’s all because womyn still don’t get a fair shake. Of course.