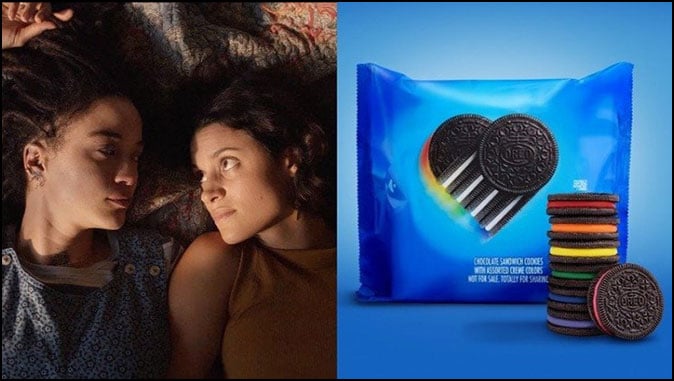 Oreo and PFLAG Working Together to Indoctrinate Children
By Monica Cole

Oreo and parent company, Mondelez International, have begun airing a gay pride commercial which has absolutely nothing to do with selling cookies. Mondelez International is attempting to normalize the LGBTQ lifestyle by using their commercials, such as the most recent Oreo ad featuring a lesbian couple, to brainwash children and adults alike by desensitizing audiences.

The ad has a daughter going home to see her family and brings her lesbian lover with her. The commercial focuses on the mother approving of her daughter’s girlfriend, but the father is hesitant and has reservations. He later has a change of heart and even displays his acceptance of her lifestyle by painting his picket fence in rainbow colors to further show his approval. The advertisement ends with: “A loving world starts with a loving home.” Followed by: “Show you’re a proud parent #PROUDPARENT.” And the final statement: “In collaboration with PFLAG. Oreoproudparent.com.”

The company is collaborating with PFLAG and celebrating their LGBTQ advocacy work. It is obvious they are going after our children in a dangerous partnership with PFLAG.

PFLAG is the United States’ first and largest organization uniting parents, families, and allies with people who are lesbian, gay, bisexual, transgender, and queer. PFLAG National is the national organization, which provides support to the PFLAG network of over 400 local chapters. Founded in New York City, New York, with their headquarters based in Washington, D.C., PFLAG is the most visible group showing support for LGBTQ youth and acceptance of this lifestyle.

Oreo and Mondelez International need to hear from you. Supporting the homosexual agenda versus remaining neutral in the cultural war is just bad business. If Christians cannot find corporate neutrality with Oreo’s and Mondelez, then they will vote with their pocketbook and support companies that are neutral. Sign our petition to Oreo’s and Mondelez now!