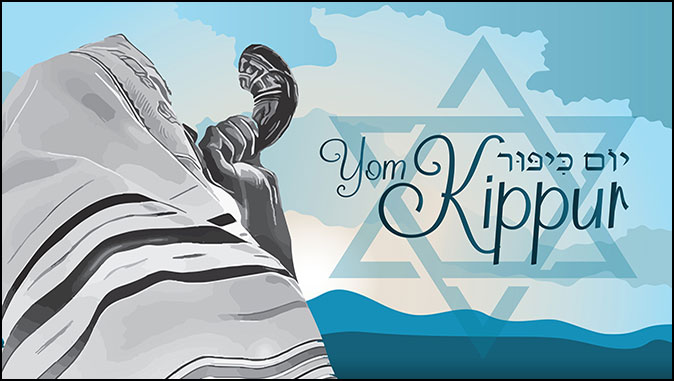 On Yom Kippur God Judges Nations Too
We should pray in the merit of our fathers.
By Don Feder

Yom Kippur, the holiest day of the Jewish year, begins at sunset on Wednesday and ends at sunset on Thursday. In between is a time when Heaven and Earth meet – when the fate of every man and woman hangs in the balance. The judgement written on Rosh Hashanah is sealed on Yom Kippur. It’s the court of last resort. From its sentence there is no appeal.

The holiest day of the year begins with the Kol Nidre service and ends with Ne’ila, the closing of the gates of Heaven. Yom Kippur is solemn, yet hopeful.

Three things, we are told, will avert the harsh decree – teshuvah, tefillah, tzedakah – repentance, prayer and acts of righteousness.

Nations too are judged.

At the beginning of the 20th century, three nations were poised to dominate the century – Germany, Russia and Japan. Between them, Germany and Japan were responsible for 75 million deaths in World War II. As they exited the world stage, Russia entered. It gave us the the Cold War and tens of millions of more deaths.

Germany ended the war in rubble. It was divided for 45 years. Though it achieved relative prosperity, today it has a well-below replacement fertility and a growing Muslim population. It could end this century as part of the Ummah.

Russia came out of communism poor in everything but natural resources (and nuclear weapons), but without the people to exploit them. It has a population of 146 million — to hold the largest land mass of any country — expected to decline to 121 million by 2050. In the meantime, Mother Russia is being pressed by China to the east and Islam to the south.

The sun is setting on Japan, which languishes in the depths of Demographic Winter. Its population declined by almost a million in the last 5 years. One of its few growth industries is removing the remains of those who die alone at home, because they have no family. The phenomenon is so common that they have a name for it “lonely death.”

And what of America?

Alexis de Tocqueville, the author of “Democracy in America,” is reputed to have said: “America is great because America is good. And if she ever ceases to be good, she will cease to be great.” That the quote is misattributed doesn’t lessen its validity.

America was established by God-fearing people. Our system of government was founded on the concept of “unalienable rights” endowed by our “Creator.”

For most of our national existence, the hand of God could be discerned above America. In a little over 200 years, we went from colonial backwater to the world’s last remaining super-power — economically and militarily unsurpassed.

Then the rot set in. Today, America is characterized by abortion on demand (though the Texas Heartbeat Law is challenging that) – 62 million unborn children have been killed since Roe.

After Roe came same-sex marriage, the sexualization of children (through what’s mischaracterized as sex education) and, most recently, transgenderism – which holds that the sex you were born with is irrelevant. Preceding Roe, the Supreme Court began purging God from the public square and schools – an undertaking which becomes more obsessive each year.

The ascendency of Cultural Marxism didn’t happen in a vacuum. In a March Gallup Poll, 31% of Millennials said they have no “religious preference” (21% for the nation as a whole) which is the same as saying they are indifferent to the idea of God.

To believe in the God of the Bible is to believe in a fixed moral code – a universal code, for all people and at all times. The alternative to God is self-deification, enshrined in the concept of choice.

The weekend after 9/11, I opened the Bible at random and read these words in Deuteronomy (Chapter 28) – the blessings and curses section of Moses final prophecy to the Children of Israel.

“The Lord will bring upon you from afar, from the end of the earth, as the eagle swoops down, a nation whose tongue you will not understand, a brazen nation, which will not respect the elderly, nor show favor to the young…. And they will besiege you in all your cities, until your high and fortified walls (the Twin Towers? the Pentagon?) in which you trust come down, throughout all your land.”

In enumerating the punishments for breaking the Law, Moses also says that God will “make pestilence to cleave to you” (bring anything to mind?) and “cause you to be broken before your enemy.” We just witnessed the partial fulfillment of the latter in Afghanistan.

On Yom Kippur, the formula is repentance followed by forgiveness. But given what America has become, is it not chutzpah to ask God to bless us?

When Solomon sought to bring the Ark of the Covenant into the Holy of Holies of his Temple, the doors were barred. His supplications had no effect until he prayed “in the merit of David, my father.” And the doors opened.

On Yom Kippur, I will pray that God saves America in the merit of our fathers – of Washington and Adams, of Lincoln and Teddy Roosevelt, of the men of Omaha Beach, Bastogne and Iwo Jima and their comrades down through the ages

Maybe that will buy us a little time.