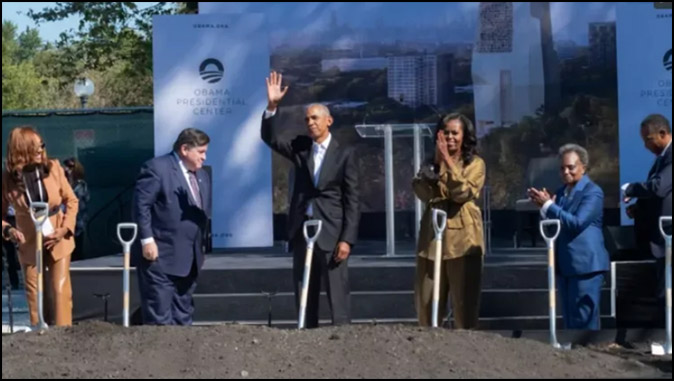 The Obama Presidential Center is only slightly less popular in Chicago than a rat with syphilis, a gang member doing a drive-by or Mayor Lori Lightfoot (ranked in reverse order of unpopularity).

The vanity memorial to the third worst president in American history has been underway for eight years. Local residents have fought it in court and community organizers have protested against it, demanding that the Messiah of Hope and Change buy them off.

“Obama himself was a bridge between communities, and this presidential center will be as well,” David Axelrod claimed. Instead, like Obama himself, the Obama Center divided everyone.

Truly, a wonderful reminder of the way that Obama always managed to bring us together.

Locals complain about the traffic, the noise and worry that black people will lose their homes. Others wonder why anyone actually needs a billion dollar monument to a retired politician.

When the Center was first proposed, Obama was a minor deity demanding his temple, now he’s a fallen god. Like the Clintons and Carter, he has receded into political obscurity. Once Democrats worshiped the ground he walked on, now they don’t care.

At least until the Obama Presidential Center claimed to have found a noose on the site.

The rope, commonplace on any construction site, was carefully bagged up and ominously displayed for the cameras.

Treating the rope like an emergency, the Obama Foundation paused work and issued a statement declaring that, “This shameless act of cowardice and hate is designed to get attention and divide us.”

It has been the only time anyone outside Chicago has paid attention to the Obama Center.

Which KKK member would have shown up to Jackson Park, these days filled heavily with black people, to plant a noose at what is probably the most highly secured non-military construction site? After a series of fake nooses which turned out to be as real as Jussie’s lynching, there’s every reason to be skeptical of this publicity stunt trying to make Obama relevant again.

That hasn’t stopped the Lakeside Alliance, which is handling construction, from offering a $100,000 reward for the grim roper. Construction on Chicago’s own white elephant project was halted, but “vehicles will be going in and out of the site today as Lakeside Alliance team members prepare for anti-bias training that will begin next week and to secure the site.”

If anyone working construction intentionally set up a noose to represent a proposed hanging of Obama, “anti-bias training” isn’t gonna fix that. All it’s going to do is make the construction workers dealing with cold and windy days even more miserable as they’re forced to hear lectures about their white privilege from racists who make five times more than they do.

The Obama Foundation brought in the Lakeside Alliance, a coalition of five, mostly black construction companies, because they were supposed to be handing out the work to minorities.

The public face of the Lakeside Alliance was Mamon Powers Jr, a name almost certainly taken from a Madea movie, who declared that “we put the president’s alliance together” because “I thought we black people should be in charge. We can build anything. We’ll select the white partner, most compatible with us, that believes in our vision, our mission and our goals.”

With four black-owned construction companies, which workers would be planting nooses?

It’s a mystery, wrapped in an enigma, tied together with Bubba Wallace’s NASCAR pull rope which was also mistaken for a noose and led to an FBI investigation and media outrage.

With six figures on the table, you would think that even the most fanatical members of the Lakeside KKK would have turned in their rope-bearing compadre. And yet no one has come forward to claim that $100,000. Or O.J.’s $500,000 reward for information about the real killer.

Local sleazy pols have however rushed to cash in on the fake noose.

“Hate has no place in Illinois. The noose is more than a symbol of racism,” fumed morbidly obese billionaire Illinois Governor J.B. Pritzker. Mayor Lori Lightfoot claimed that the rope was “disturbing” and “repulsive”: two words that have often been used to describe her face.

Say what you will about Obama, and there’s lots to say, he has at least avoided staging hate crimes against himself in the past. But a man desperate for attention will do anything.

The Obama Foundation’s fundraising has been dropping.

The messiah’s foundation wants to raise $1.6 billion for a center that dozens of schoolchildren, and frightened tourists seeking refuge from rampaging thugs will visit each year. That’s a lot of money for a guy who hasn’t been able to hand out government contracts since the last Pirates of the Caribbean movie.

In 2018, funding fell 30%, but still grabbed $165 million in scratch. Last year, it struggled to bring in $160 million. That was the year that Amazon robber baron Jeff Bezos wrote a $100 million check to Obama on the condition that he name the plaza after former Rep. John Lewis and then dance for his amusement every weekend on his spaceship as he leaves the earth behind.

Obama, not to put too fine a point on it, needs money. And unless Michelle becomes secretary of state or takes his old job, the number of donors willing to write him checks is declining.

And while I’m not saying that Obama hired two Nigerian trainers to put a rope around his neck while shouting, “Jackson Park is MAGA country”, it’s more plausible than that 4 black construction companies in a black area planted a noose just around end-of-year fundraising.

The KKK doesn’t do end-of-the-year fundraising drives. Nonprofit foundations however do.

Work on the Obama Presidential Center has resumed. And hopefully donations have picked up to ensure that the white Obama staffers running the place can afford vegan cruises to Iceland.

But considering the trauma that greeted the finding of a rope at a construction site, and the pain inflicted on Chicago and Illinois residents by the news, I have, out of the goodness of my heart, contacted the Obama Foundation with my tip and told them where to send my $100,000 check.