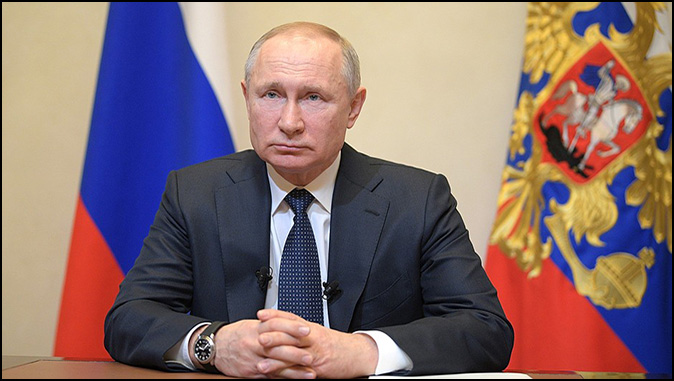 Nuclear Threats Are a Sign of Weakness, Not Strength
By Daniel Greenfield

Compare that to Putin who can’t stop talking about Russia’s nuclear capabilities. That’s not new. Khruschev’s fake madman act at the UN onward, Russian leaders kept talking about their nukes to cover up their overall military weakness.

In the MAD era, nukes are not an option for anyone except suicidal fanatics or those convinced that their enemies are so weak that they won’t retaliate. Or they’re a giant bluff.

How do you spot a bluff?

“To those who allow themselves such statements regarding Russia, I want to remind you that our country also has various means of destruction, and for separate components and more modern than those of NATO countries, and when the territorial integrity of our country is threatened, to protect Russia and our people, we will certainly use all the means at our disposal,” Putin said in a Wednesday address.

When you have to say it’s not a bluff, it’s a bluff.

Putin isn’t, despite what the media says, nuts. Under enough pressure, he might escalate to potentially using a battlefield nuke on the ground, but considering the limited tactical viability of doing any such thing, even that seems unlikely. Despite the hysteria that’s been going on now for 7 months now, there’s no nuclear war between us and Russia, nor is there going to be one.

The only reason Putin keeps talking about nukes is because Russia’s military is weak, its economy is a mess and it’s the only card he has to play.

And he can’t actually play it.

That puts him on par with Biden who talks big but then has nothing to back it up with.

This phase of the war will play out, however it plays out, leaving little in its wake except local misery. Amid all the propaganda from both sides that has thoroughly saturated the conversation, it’s best to remember that the impact on us remains purely economic.

The economic part is due to Biden’s reliance on the same failed sanctions strategies.

The war should have been purely decided on the battlefield in Ukraine without inflicting economic misery on Americans and Europeans. By cutting off Germany, Putin has already detonated his economic ‘nuke’ sending energy prices skyrocketing. The backlash may end up reshaping German and European politics, and has at least convinced some of them to back nuclear energy again. And maybe that’s the real fallout from this war.

And if we can secure cheap nuclear power again, that will be a big victory whatever happens on the battlefield.