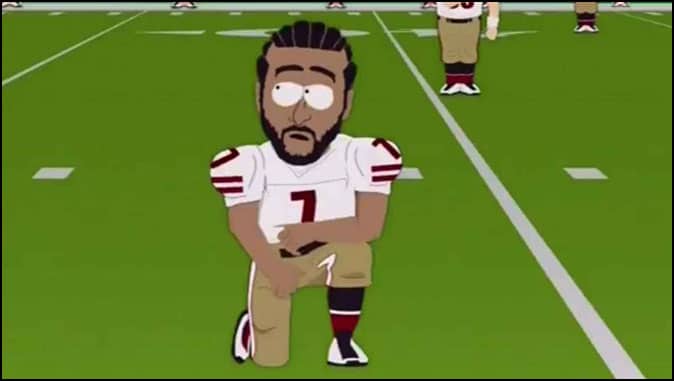 Can’t we just begin every NFL game with the ceremonial burning of the American flag followed by three hours of rioting and looting?

But I see the style guidelines for capitalizing black have kicked in. I look forward to the decapitalization of America, George Washington, and G-d, while lefty culture heroes like MARGARET SANGER or BARACK OBAMA will have their names spelled in all-caps.

“Lift Ev’ry Voice and Sing” will be performed live or played before “The Star-Spangled Banner” prior to each NFL game during Week 1 and the league is considering putting names of victims of police brutality on helmet decals or jersey patches, a person familiar with the discussions told The Associated Press.

What about the victims of crime? Putting their names on would probably count as a hate crime.

But this is the perfect symbol of a dying corrupt organization whose matches will be played with no audiences. Sure, play a national anthem for every race, creed, and sexual orientation. Considering that we’re up to 128 in the latter category, it may take a while. And I’m not sure that the Asexuals or the Two-Spirts have selected an anthem yet.

All these anthems may cut into playing time, so the NFL should probably jettison the actual game and just hire a bunch of Colin Kaepernicks to take the knee before filming Nike commercials.