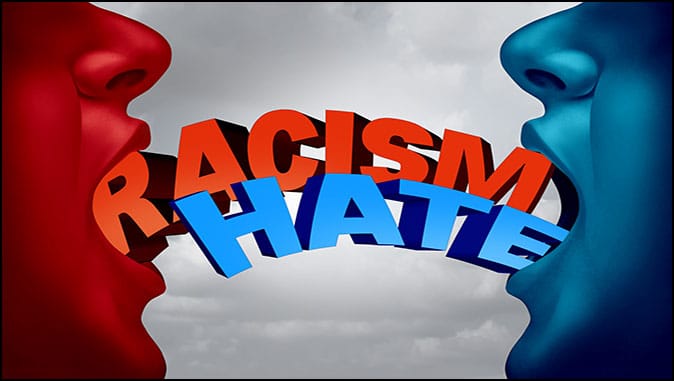 I should probably give consideration to changing Nearing Midnight to “This Week in Craziness.” Last week I wrote about a gay rapper selling 666 shoes and giving Satan a lap dance. This week we have a prayer book called “A Rhythm of Prayer: A Collection of Meditations for Renewal.” In the book, a black woman asks God to help her hate white people.

One prayer, called “Prayer of a Weary Black Woman,” by Dr. Chanequa Walker-Barnes, a theology professor at Mercer University, starts out:

“Dear God, Please help me to hate White people. Or at least to want to hate them…I want to stop caring about their misguided, racist souls, to stop believing that they can be better, that they can stop being racist.”

I am just shocked how this dingbat professor doesn’t have a grasp of how she is bastardizing the basic teachings of Jesus Christ. The Satanic Bible by Anton LaVey doesn’t contain this level of vile hatred.

“Lord, if it be your will, harden my heart. Stop me from striving to see the best in people. Stop me from being hopeful that White people can do and be better. Let me imagine them instead as white-hooded robes standing in front of burning crosses. Let me see them as hopelessly unrepentant, reprobate bigots who have blasphemed the Holy Spirit and who need to be handed over to the evil one.”

“Grant me a Get Out of Judgment Free Card if I make White people the exception to your commandment to love our neighbors as we love ourselves.”

This book is a best seller on Amazon, ranked #305 at the time I’m writing. It is ranked #1 in Christian Meditation. The book is also available at Target— a store that banned a book that gave voice to transgender people who regretted their decisions to transition.

There is a growing mindset in the black community that past injustice grants them the right to hate other races. Many think that they’re incapable of being racist because they don’t have the power.

The vast majority of recent attacks on Asian people are done by black thugs. The liberal media and law enforcement just ignore the problem. If the Asians had been attacked by Nazi skinheads, they would be universally called out.

The press is so fixated on blaming white people for our nation’s problems, they quickly drop any news story where a non-white is the shooter in a mass murder incident. They’ve been milking the Jan 6 invasion of the Capitol Hill Building for the past three months because it was mostly a bunch of white supporters of Donald Trump.

The liberal media went into overdrive when there was a “second attack” on Capitol Hill. When it was found out that the driver of the car that killed a police officer was a Louis Farrakhan follower, the press killed the story within a day.

The Derek Chauvin trial has become a ticking time bomb. The media has played this up so much as a referendum on racial justice that if he’s acquitted of charges involving George Floyd’s death, there will be a new round of rioting.

The craziest part about the fixation with racism is that it is a distraction from the massive black-on-black murder rate. There was a shooting at a Knoxville, Tennessee, high school that left one person dead. Four other members of that same high school have been murdered in the last few months, and there were 10 other murders within a mile of the school. The left’s only suggested answer to the problem is to defund the police.

The racial strife I worry the most about is the growing rift between blacks and Jews. Because God said He would bring all Jews back to Israel, I think anti-Semitism will be the driving force. Muslim hatred of Jews in Europe is rapidly working to fulfill this prophecy, and America will likely be next.

The left is already talking about Jews in ways that heap them in with whites. When asked about the people who don’t understand why some teachers don’t want to return to in-person teaching, Randi Weingarten, President of the American Federation of Teachers, targeted her response at Jews:

“What I hear when I hear that question is that those who are in the ownership class now want to take that ladder of opportunity away from those who do not have it.”

The Jews are now the oppressors, which reminds me of how things played out in a certain European country in the 1930s. In this case, persecution of Jews will unfold much faster because the attackers will think they are doing God’s work.

“Woe unto them that call evil good, and good evil; that put darkness for light, and light for darkness; that put bitter for sweet, and sweet for bitter!” (Isaiah 5:20).