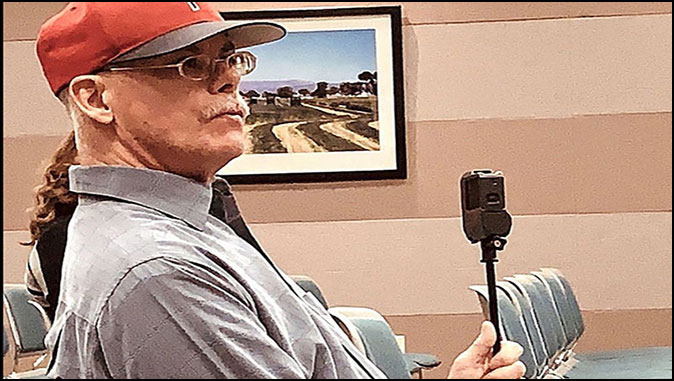 Geoff Knell – with his camera – waits his turn to speak at a County Commission meeting. The politicians couldn’t avoid him! [Photo: Nevada Appeal]

We publish a lot of articles about how teams of activists in MassResistance chapters accomplish great things. That’s how a lot of “culture war” victories happen.

But in fact, just one activist who is dedicated, knowledgeable, and fearless can take on the establishment and win!

Geoff Knell lives in Fallon, NV, which is 398 miles northwest of Las Vegas. Most of our Nevada activists live in the Las Vegas area. Others are scattered around the state, but Geoff is nevertheless a completely dedicated MassResistance activist. And he is outraged at the LGBT efforts to target young children.

After “Drag Queen Story Hour” library events started showing up in a few Nevada counties, Geoff decided to make sure that no “Drag Queen” would come to his county. His success against stubborn, insensitive politicians is an inspiration to all of us.

Drag Queen Story Hour (DQSH) events for children, put on in public libraries around the country, are heavily promoted by the LGBT movement. Their stated purpose is to give children “unabashedly queer role models.” They target young children with homosexual and transgender propaganda. Drag Queens – homosexual men who dress up as garish impersonations of women – are terribly dysfunctional people on several levels.

It started in Henderson, NV, a suburb of Las Vegas. Sometime in 2018 the public library in Henderson began holding “Drag Queen Story Hour” events. Soon after that, local parents began complaining, but nothing substantial came together.

Next the DQSH came to Sparks, NV, a suburb of Reno. In July 30, 2019, the public library in Sparks (in northern Nevada) put on a DQSH event for children. Sparks is 63 miles from where Geoff lives. So on the day of the event, Geoff went there and protested. The library director was so incensed that he forced Geoff away from the building.

The DQSH events continued in Henderson. Finally, when a DQSH event was scheduled for Aug. 24, Nevada MassResistance activists got to work. Very quickly, they exposed the “Drag Queen” that the library had invited as a crude adult entertainer.

The “Drag Queen” invited to perform in the Henderson library had made a video showing himself simulating a homosexual sex act. Is this a person parents would want reading to their children?

People were shocked and outraged. In the weeks leading up to the event, MassResistance parents leafletted the town, and contacted the Library Commission, the City Council, and the County Board of Commissioners – to attempt to get it stopped. But the momentum was there, and the public officials wouldn’t budge. On the day of the event Nevada MassResistance organized a protest outside the library. The following month, on Sept. 7, the library held another Drag Queen event, which parents also protested.

Geoff was particularly worried because he lives in the next county over from Sparks – Churchill County. Geoff realized that if he waited for a DQSH event to be announced there, it would be too late to stop it.

He knew it was time to be proactive. He decided that he would make sure that no DQSH events would come to Churchill County libraries.

He got right to work. What he accomplished is amazing.

Basically, he did a one-man full-court-press on the local politicians. He was armed with the facts about what DQSH events actually are, what the “Drag Queens” really are, and what these events were trying to do to children. He wasn’t afraid of using words like “sexual perversion” and “indoctrination.”

Between November 2019 and mid-January 2020, Geoff appeared before the Churchill County Commissioners, the Fallon City Council, the School Board, and even the Youth Board meetings. He spoke with members of the Library Board of Trustees and the library staff, too. He even talked with candidates for local public offices. Geoff was relentless and aggressive.

Geoff talks to a local official before a meeting.

Most public officials and candidates didn’t want to talk about it. They didn’t want to get involved. Some even supported “Drag Queens” in libraries. Geoff would push hard anyway, and he did not mince words. That usually irritated them considerably, but Geoff didn’t care. They needed to do their job and protect the public, he told them.

When one of the Library Trustee members told Geoff that she supported DQSH events, Geoff became even more alarmed and made sure everyone knew how dangerous this situation actually was. They didn’t want to hear it, but Geoff wouldn’t let up. He pounded and pounded.

He was most relentless with the Churchill County Commissioners. They were the ones who funded the library system and who appointed the Library Board of Trustees. Geoff wanted them to pass an ordinance banning any Drag Queen event in a public library. This was something the Commissioners clearly didn’t want to do. Even though they may have privately agreed with him that it could be a problem, it was not politically correct. Geoff’s arguments were sometimes crude, but were always accurate – and he could sense that the officials knew that.

The Churchill County Commission on Dec. 18.

Geoff came and testified at the Dec. 18, 2019 County Commission meeting and again at the Jan. 6, 2020 meeting. He also emailed them considerable material (to which they did not respond) and he invited them to meet with him (which they declined). But it was clear that they got his message and they understood it.

A week later, the Nevada Appeal newspaper, which operates out of Reno, published Geoff’s testimony about the “Drag Queen” threat from the Jan. 6 County Commission meeting.

That got a lot of people’s attention, and clearly agitated several public officials. A few days later Geoff had a scheduled meeting with the mayor of Fallon. The mayor quietly asked Geoff to please “change your tack” on the Drag Queen issue. The mayor said it was because word was getting out and “someone could attempt to have the Drag Queen Story Hour come here.” But we think he (and members of the City Council) were actually worried about more public outrage igniting.

Geoff gets the word: “There will be no DQSH in our libraries!”

Geoff’s pounding away made a difference. The County Commission was clearly afraid to do anything publicly. But behind the scenes Geoff had made a lot happen. The Commission let the library know that they’d better not do it. And (because they probably wanted to get Geoff off their backs) they did their best to let him know that his efforts were successful. But they didn’t want to announce it, so they got the word to him indirectly:

Right after the Jan. 6 County Commission meeting adjourned, Geoff approached the County Commissioner who represents his district. The man was clearly exasperated with Geoff. He told Geoff that he’d read his material but wouldn’t meet with him. He said that the Commissioners were not going to act on the Drag Queen Story Hour issue. But Geoff kept badgering him about it. The Commissioner finally yelled back at Geoff, “The library is not doing it. The librarian has said it’s not a good fit for here. They’re not doing it. We don’t have to tell them that!”

After the County Commission meeting on Jan. 6, Geoff talked to his Commissioner, Carl Erquiaga, who was getting pretty upset with Geoff’s questions!

A few days later another politician approached Geoff and told him the same thing. He said that after a recent Library Board meeting one of the County Commissioners directly asked the county library director (a big liberal): “Would you allow a Drag Queen Story Hour here at the Churchill County Library?” The library director answered, “Absolutely not!” he told Geoff.

“I put the pressure on all of them. I kept coming at them. What if that was your son or daughter?” Geoff told us.

Had Geoff not acted boldly and fearlessly, we know what would have happened in Churchill County: The library would have had no pushback from planning and hosting a DQSH event. That’s the way they all get started. And had that happened, the County Commissioners might have silently disagreed, but would have caved in to the momentum and not fought it.

Now, both the library officials and Commissioners have been put on notice that if any DQSH event ever shows up, there will be trouble. That’s the kind of fear that all government officials should have of their constituents.

All this was done by just one dedicated, knowledgeable, and fearless person!

Whether it’s a whole team or just one pro-family person – MassResistance is here to help make it happen!