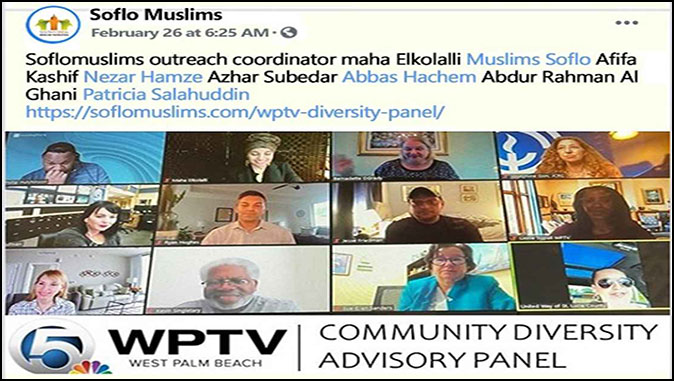 Muslim Federation Tags Islamist Who Calls Jews ‘Demonic’ on Facebook
Media legitimizes the Federation, while the group surrounds itself with extremists, terror and bigotry.
By Joe Kaufman

The South Florida Muslim Federation or SoFlo Muslims is an umbrella organization made up of various Islamic extremist groups found in South Florida. Because of its nature, the individuals the Federation surrounds itself with tend to be just as radical. Last month, the Federation put out a social media post linking to a number of these radicals. One was Abdur Rahman al-Ghani, an individual who has targeted Jews, homosexuals and America with vile bigotry and Islamic supremacist language. The post was about a TV station panel that, regrettably, the Federation was invited to participate in. In truth, no one should have anything to do with this organization.

On February 23rd, the Muslim Federation posted the following, along with a graphic from the event, on its Facebook page: “SFL Muslim Federation Outreach Committee Chair, Maha Elkolalli, represents SoFlo Muslims on WPTV’s Community Diversity Advisory Panel.” Besides Elkolalli, other entities represented on the panel were local officials from the Urban League, the Jewish Federation, United Way, and the Esperanza Community Center, a group that provides assistance to families that are facing eviction from their places of residence. Ironically, at least in the case of the Muslim Federation, the title of the event was ‘Hidden Bias in Good People.’

Maha Elkolalli has devoted her life to seeing that cop killer Jamil al-Amin, a.k.a. H. Rap Brown, is freed from prison, where he is serving a life sentence. In March 2000, al-Amin allegedly opened fire on two officers looking to arrest him for a prior incident, killing one, Deputy Sheriff Ricky Kinchen. Post after post, on Elkolalli’s Facebook page, call for “freedom” for al-Amin. Her Facebook banner shows her holding up a sign next to an image of al-Amin, reading “FREE H RAP BROWN.” Elkolalli, who has also called for the release of cop killer Mumia Abu-Jamal, has a video on her Facebook madly labeling President Ronald Reagan a “WHITE SUPREMACIST.”

On February 26th, the Muslim Federation posted the same WPTV panel graphic, along with a message that ‘tagged’ different individuals, including Elkolalli. One of them was the former Facebook Manager for the Federation, Abdur Rahman al-Ghani. Al-Ghani, a.k.a. Samuel Pittman, was with the Federation for its first two years, starting in 2017. The Federation removed al-Ghani, after this author exposed al-Ghani’s massive bigotry, he referring to Jews as “demonic,” gays as “stone cold kaffirs outside the fold of Islam,” and America as the “World’s Number One Terrorist Organization.” He, as well, stated that Islam “will over-take the World…”

Also tagged on the Federation post was al-Ghani friend, Azhar Subedar. Subedar, who refers to al-Ghani as “my dear brother,” has spent time at al-Ghani’s home. Subedar has, as well, gone wakeboarding with Federation resident imam Izhar Khan, who was previously charged with financing the Taliban, and has participated in events with Mazen Mokhtar, a former al-Qaeda recruitment website administrator and champion of suicide bombings, and Monzer Taleb, a Hamas singer, who thinks that Israel “should be relocated to Germany.” Subedar, himself, has been a fundraiser for Islamic Relief, a charity that has been banned by a number of nations.

Yet another individual tagged on the Federation post was Nezar Hamze. Hamze was the founding Executive Director of the South Florida Muslim Federation. Today, according to the Federation website, he is a member of the organization’s Outreach Committee and Matrimonial Committee. Prior to his involvement with the Federation, Hamze worked for the Hamas-associated Council on American-Islamic Relations (CAIR), as its Florida Chapter Executive Director and Regional Operations Director. While with CAIR, Hamze participated with other terror-related groups, including Islamic Relief and the Islamic Circle of North America (ICNA).

During the WPTV panel, when asked about solutions for reducing biases against others, the Federation’s Elkolalli stated the following: “Honestly, it’s just going back to the basics of remembering each other’s humanity. There’s this process of dehumanizing groups of people and making them ‘less than,’ and it’s justification of abuses of those groups… [W]hen you see that a group is being abused or there are injustices against groups that are outside your circle, to say ‘Hey, we are here, and we will stand with you, because this is unacceptable.’”

Elkolalli uses as examples of bias-reducing situations: Muslims helping to raise funds to repair the damage of a Jewish cemetery, after the cemetery had been vandalized, and synagogues opening their doors to Muslims to use for prayer, when mosques had been burned down. While these things may appear to WPTV’s audience as righteous deeds, the first example has been challenged as being a publicity stunt and both are ‘red herrings’ – mere distractions – because the organization Elkolalli represents surrounds itself with groups and individuals who perpetuate the same type of dehumanizing bigotry that Elkolalli claims is unacceptable.

Neither WPTV nor any media outlet should allow the South Florida Muslim Federation to have representation on their shows. To do so only legitimizes the organization and makes a mockery of the subject being discussed, in this case, bias against others. Instead, the Muslim Federation should be shunned and exposed for the danger it poses to the community.