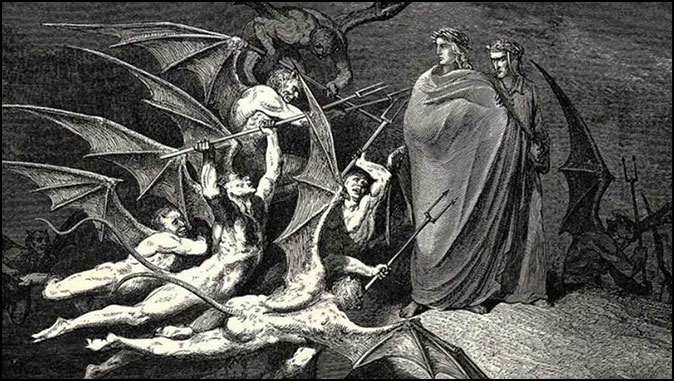 The news has been quietly making the rounds in European news outlets, following an initial report by the newspaper De Standaard that was picked up subsequently by several French publications: a new translation of Dante Alighieri’s Inferno, written between 1304 and 1307, is causing controversy following the translator’s alterations.

Valeurs Actuelles reported that Lies Lavrijsen, who was tasked with the translation of the famous book by the Florentine poet, decided to remove any mention of Muhammad altogether, in a push to make the text more “more pleasant and accessible.” Speaking on the Belgian radio station Radio 1, she defended her exclusion, stating “a widest possible accessibility,” especially for “a younger audience,” as her justification. She added: “We knew that if we left this passage as it was written, we would have unnecessarily hurt a large part of the readers.” Lies Lavrijsen even reveals that the decision was made “in the tense period that saw the death of the teacher Samuel Paty in France.”

This censored passage is a key element of the work, when Dante enters hell and meets many characters through several circles during his journey, recalls Courrier international. Historical figures are locked up “because of their more or less serious sins.” According to Lavrijsen, Muhammad was being punished for having spread “his religion, which had allegedly sown discord on Earth,” and “of all the sinners who appear in Hell, he is described in the most atrocious and denigrating way.”

The response following her appearance on the program has been widely negative. Many listeners, including Muslims, called in to complain saying that the translation was both “denigrating to Muslims and to young readers,” inferring that they would not be able to put the work in its context. Several other translators weigh on the matter for De Standaard, dumbfounded that such a work would be edited, and asking for the description of the book to be revised to “adaptation” as opposed to “translation.” Moreover, according to Moroccan writer Adbelkader Benali, who has read several Arabic versions of Inferno, the passage was in fact left in place in all of them. The authors had added footnotes, however, to “explain” the work in its context.

It is not the first time that Dante’s opus faces calls to be “cancelled” for its depiction of Muhammad as one of the lowest forms of evil encountered in hell. In 2012, an Italian NGO called for the “offensive and discriminatory” classic to be removed from Italian classrooms, but was met with a backlash for this attempt to take the masterpiece out of the curriculum. And a couple of years before that, Yale University Press refrained from publishing a depiction of the Inferno’s scene featuring Muhammad by the famed French artist Gustave Doré among other images in a book specifically dedicated to the subject of illustrations of Muhammad.

Nor will it be the last. In this age of crazed censorship and political correctness, coupled with escalating acts of violence towards those who dare “slander” Muhammad — as we have tragically seen with Samuel Paty and the latest case in the UK — it seems to be only a matter of time until the thought police edit anything “problematic” out of our culture, according to their definition.

If our literary works, statues and recorded historical events are all being rewritten or written off completely, and — above all — without our freedom of expression, what will we have left?