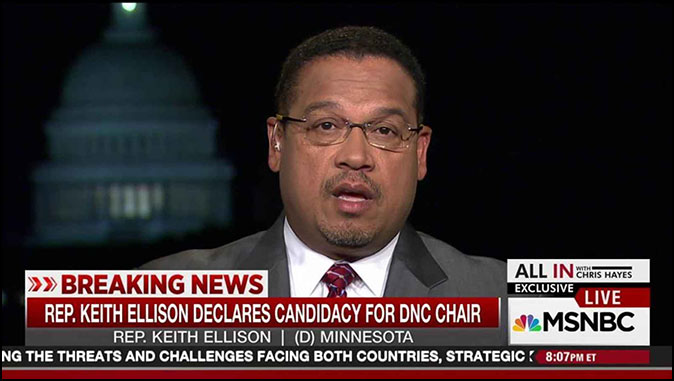 When you have the record that Attorney General Keith Ellison does, it’s understandable that he doesn’t want the cops showing up.

According to Minnesota Attorney General Keith Ellison, women who have just been sexually assaulted would prefer to talk to a social worker than law enforcement. The former DNC Deputy Chair and Congressman shared his thoughts about how rape victims feel following their attack on a Zoom meeting.

“If you’re a woman who’s been a victim of a sexual assault and the assailant has ran away, wouldn’t you rather talk to somebody who is trained in helping you deal with what you’re dealing with as opposed to somebody who’s main training is that they know how to use a firearm, right?”

If you’re a crime victim, you’re calling the police because you want the bastard brought to justice. If you just want someone to talk to, you call a therapist.

But Ellison is pushing “restorative justice” which is the big ugly thing waiting in the wings behind “criminal justice reform” and police defunding. That means letting criminals go unpunished, even more than before, while arranging therapy sessions for the victims. And if those victims are members of the wrong group whose lives don’t matter, that will include owning their privilege and being lectured about white fragility, and perhaps going to jail for even daring to call the police.

In other words, if you think that things are bad now, just wait. We’re going to some much worse places.

Ellison is about the worst messenger for this after having been accused by ex-girlfriends Amy Alexander and Karen Monahan of domestic abuse. The Alexander assault led to a 911 call which produced its own records. Despite that the Democrats stuck by Ellison and now he’s in a position to advocate for policies that would badly harm rape victims. But then again that fits neatly into Ellison’s religious convictions. Islamic law doesn’t favor rape victims. Like the Left, it favors rapists.

Why God Hates CNN By Bill Perkins The LORD hates a lying tongue: “These six…

Hillary: Ripping The Nation Apart Under the Banner of ‘Togetherness’

Hillary: Ripping The Nation Apart Under the Banner of ‘Togetherness’ By Michael Bresciani The effectiveness…

California Caves to the Mob

Do Democrats Understand What They Are Supporting?

Do Democrats Understand What They Are Supporting? A popular Facebook meme suggests mass Democrat confusion,…

Obama’s Shame: The Insanity of His Last Days in Office (Part 2 of 2)

Obama’s Shame: The Insanity of His Last Days in Office (Part 2 of 2) By…

Did Dr. Fauci Fund the Research That Led to Coronavirus Outbreak?

Did Dr. Fauci Fund the Research That Led to Coronavirus Outbreak? By Bryan Fischer The…