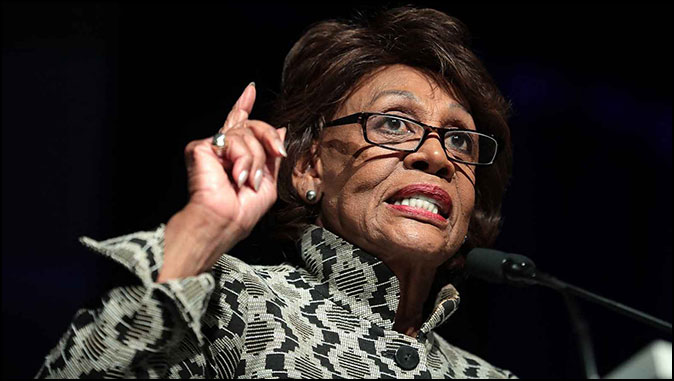 At an outdoor rally in Los Angeles, Waters, with microphone in hand and amplifiers nearby, shouted: “Let’s make sure we show up wherever we have to show up. And if you see anybody from that Cabinet in a restaurant, in a department store, at a gasoline station, you get out and you create a crowd. And you push back on them. And you tell them they’re not welcome anymore, anywhere.”

In response, President Donald Trump tweeted: “Congresswoman Maxine Waters, an extraordinarily low IQ person, has become, together with Nancy Pelosi, the Face of the Democrat Party. She has just called for harm to supporters, of which there are many, of the Make America Great Again movement. Be careful what you wish for Max!”

Asked by a news anchor why America “has such difficulty” in making change “when it comes to violence and injustice done to Black people,” Waters responded, “The police, I think, really believe, and in some ways are led to believe, that their greatest challenge and their greatest chore is to keep, you know, Black people in their place.”

The police? All of them? Not just racist white cops? And Waters meant now, today — not decades ago. She said police are “led to believe that their greatest challenge … is to keep … Black people in their place”? Led to believe this by whom?

Is it relevant that many of our major cities have or have had Black police chiefs? Is it relevant that many big-city police departments increasingly reflect the racial diversity of the communities they protect and serve? Is it relevant that an increasing percentage of the nation’s sworn police officers are officers of color, including the police chief in Minneapolis, where George Floyd died? According to The Washington Post: “Police departments across the country have become less overwhelmingly white since the 1990s, according to a study published by the federal Bureau of Justice Statistics last fall. The agency’s survey of police departments found that the share of white non-Hispanic police fell from 78.5 percent in 1997 to 71.5 percent in 2016.”

Irresponsible attacks against the supposedly “systemically racist” police by politicians like Waters are, in part, responsible for the “Ferguson effect,” the phenomenon of cops pulling back from proactive policing for fear of accusations of engaging in “systemic racism.” In reaction to anti-police protests in Chicago in 2015, then-Mayor Rahm Emanuel said the city’s police have gone “fetal.” Emanuel said: “We have allowed our police department to get fetal, and it is having a direct consequence. They have pulled back from the ability to interdict. … They don’t want to be a news story themselves; they don’t want their career ended early; and it’s having an impact.” He later added: “Officers themselves are telling me about how the news over the last 15 months impacted their instincts — do they stop, or do they keep driving? When I stop here, is it going to be my career on the line?” Meanwhile, in Los Angeles County, Waters’ home base, homicides during the first two months of 2021 were up 186% compared with 2020, according to Fox News.

When cops pull back from proactive policing, crime goes up. By teaching young Blacks that cops hate them, why would a young Black man comply when pulled over by a “systemically racist” cop? And this failure to comply can turn a traffic stop into something deadly. Waters’ rhetoric has led to an increase in homicides in America’s cities, where the majority of the victims are the very “people of color” she claims to care so deeply about.