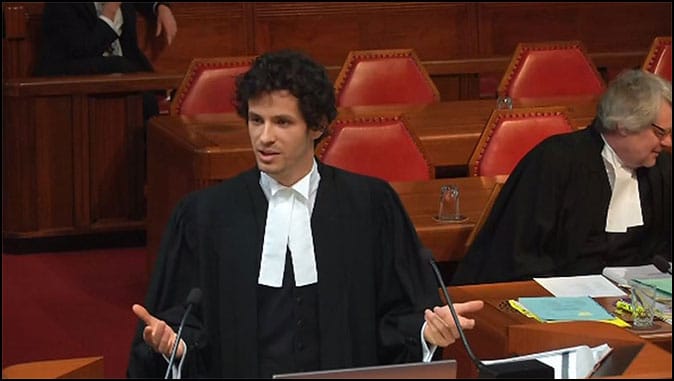 Rob Hoogland is freed from prison! Powerful new attorney takes over his case and successfully files for appeal
Hoogland thanks MassResistance for standing up for the truth and not backing down.
Describes horrible conditions in prison – just for breaking ‘gag order’
Case reverberates across Canada.
May 7, 2021

Two weeks after British Columbia father Rob Hoogland was sentenced to a prison term, he has been freed and is back home! He was imprisoned for violating a “gag order” that barred him from discussing his teenage daughter’s gruesome government-supported “sex-change” procedures.

An angry judge and harsh punishment

As we recently reported, British Columbia Supreme Court Justice Michael Tammen angrily overrode a preliminary plea bargain and sentenced Rob to six months in prison (which would likely have ended up being about 4½ months) and a $30,000 fine. (We have since learned that Rob’s lawyer had rejected the final version of the plea deal, which made it easier for the judge to intervene.)

Tammen was furious that Rob had told MassResistance and others what the government is doing to his daughter – and that MassResistance had subsequently posted incriminating documents exposing the terrible behavior of the “gender clinic.” Tammen said that unless Rob were imprisoned for several months, it would “bring the administration of justice into disrepute.” This sentence is widely considered overly harsh given that it concerns a relatively minor crime and Rob is a first-time offender.

Tammen’s emotional obsession with this case and with punishing Rob is exhibited in a detailed 18-page “Reasons for Judgment” paper he wrote after the sentencing. Like the punishment he gave out, it seems rather excessive given the relatively mundane nature of the “crime.” (Note that Tammen refers to MassResistance in the document only as “MR” so that no one will look us up and see our posts!)

Rob Hoogland takes a last look outside of the Court building before turning himself in on March 16.

A new attorney takes on the appeal!

After he was jailed, Rob’s friends and family contacted one of the top young criminal-appeal lawyers in British Columbia, Attorney Vincent Larochelle, who has taken the case. Larochelle is a graduate of Oxford Law School, a Rhodes Scholar, and is considered a “rising star” in this field. His fees are coming from the money Rob raised on his GoGetFunding page.

Larochelle successfully filed an appeal for Rob, arguing that his rights were clearly violated under Canada’s Charter of Rights. On April 30, the British Columbia Court of Appeal granted the application for Rob to be released on $1,000 bail until his appeal hearing, which has been scheduled for Nov. 1, 2021.

However, the Court of Appeal’s Release Order has outlined several strict stipulations which Rob is required to obey during this time. These include:

1. A full and thorough reinstatement of the “gag order”: Rob may not in any way, directly or indirectly, identify himself, his daughter, or anyone else involved with his daughter’s situation by name, nor may he discuss or provide documentation about her medical status, mental health, or treatments. He also may not, through any means, identify himself as the father.

2. He must keep the peace and be of good behavior, and diligently pursue his appeal.

3. He must maintain his current employment.

4. He must remain within the province of British Columbia, and surrender his travel documents to the Royal Canadian Mounted Police.

Rob spoke with us a few days after he got home. It was basically to let us know that he was free, because he knew we were very concerned.

He said that he intends to fully abide by all the terms of the Release Order. During the conversation, he did not identify himself by name, nor make any reference to his daughter’s situation or to any of the other people involved.

He talked about his experience in the prison since being incarcerated after his initial hearing in March. Rob was a first-time offender who had violated a gag order – a fairly minor, non-violent crime. But Justice Tammen purposefully placed Rob in the North Fraser Pretrial Centre, which is a high-security facility for violent offenders. It has a history of being a brutal place.

It was horrible, Rob said. He was in solitary confinement for 23 hours a day. But during the one hour he was out of his cell, it was even worse. “It’s a very violent place. You had to be very careful because confrontations happened frequently. And the guards would only step in after a person gets beaten up,” he told us.

A letter from a Member of Parliament

What has happened to Rob’s daughter and the grotesque way that Rob was treated by the Court has reverberated across Canada, despite a virtual blackout by the mainstream media. (Only Canada’s alternative press, Rebel News has covered it with any consistency.)

While he was in prison, Rob received a letter from a Member of Parliament, Derek Sloan of Ontario, who is an outspoken conservative. MP Sloan was very supportive. He told Rob:

Stay Strong. The biggest changes come from government overreach like this. This is a tough time, but know that you are in the hearts and minds of many. This is a low point, but it’s things like this that will cause your plight to spread and the government to eventually break. You’re in all of our prayers.

At the trial, Justice Tammen blamed MassResistance’s refusal to take down the incriminating documents as a reason he was so harsh on Rob. But despite everything that has happened to him, Rob still has high praise for us. Although he was careful to speak in very general terms and not bring up specifics, Rob said that he “absolutely supports what we did” and “is glad that we stood up” to the pressure.

He added that he is angry at the few detractors of MassResistance in British Columbia, particularly the “transgender activist” Jenn Smith. Rob clearly understands the larger fight!

The government of Canada has become completely out of control in its frightening oppression of citizens who do not submit to the increasingly radical and destructive LGBT movement. The appeals trial starting on Nov. 1 will likely be a landmark event. This time, Rob will have an energetic and skilled attorney with a track record for winning. Will it turn the tide? Rob is personally very upbeat about it! We’ll definitely continue to report this case.

In the meantime, you can donate to Rob’s legal defense fund HERE.