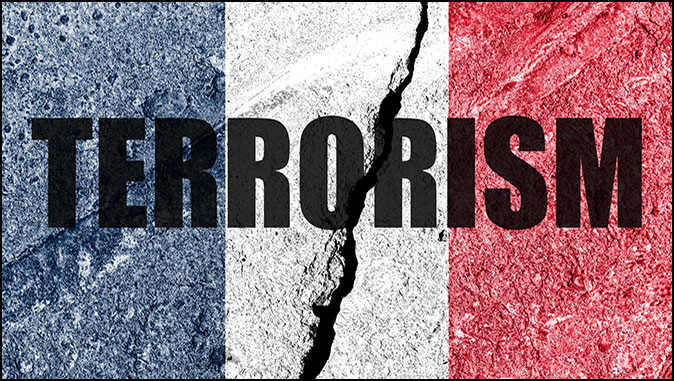 Marine Le Pen Goes On Trial for Opposing Jihad Terror
Just when you thought that France was becoming more sensible about the jihad threat.
By Robert Spencer

You thought it would stop with the defaming and deplatforming of foes of jihad terror? No. Soviet-style judgments of insanity are next. And what will come after that? The answer is clear enough.

Not coincidentally, Le Pen is riding high in the polls, and she “will likely face off again against Emmanuel Macron in next year’s presidential contest, after her National Rally made its strongest showing ever in the 2017 vote.”

She has gone on trial, and was previously ordered to undergo psychiatric testing, because she “shared the gruesome images in December 2015, a few weeks after Islamic State group jihadists killed 130 people in attacks in Paris, in response to a journalist who drew a comparison between IS and her party. One of the pictures showed the body of James Foley, an American journalist beheaded by the Islamist militants. Another showed a man in an orange jumpsuit being run over by a tank, and the third a Jordanian pilot being burned alive in a cage. ‘Daesh is this!’ Le Pen wrote in a caption, using an Arabic acronym for IS.”

Why did she do that? Out of a lurid fascination with blood and gore, or some secret sympathy for the Islamic State’s jihad? No. She tweeted out those images because her party was being likened to the Islamic State in the French media. In a bid to bring the national discussion back to some semblance of sanity, she pointed out – by means of visual aids – that her party was not behaving in the same way as the Islamic State, and not leaving a trail of bloodshed and death in its wake.

But that means nothing to the French authorities who are desperate to destroy her, her movement, and any and all opposition to their globalist, socialist, open-borders agenda. According to The Local, she was charged with circulating “violent messages that incite terrorism or pornography or seriously harm human dignity.” Adding to the Orwellian flavor of the whole scenario was the fact that this order was issued on September 11.

Le Pen is still trying to inject a note of sanity into this fantastically insane public discourse, stating: “I thought I had been through it all: well, no! For denouncing the horrors of Daesh (Isis) by tweets the ‘justice system’ has referred me for a psychiatric assessment. How far will they go?!”

How far indeed? Le Pen is defiant: “Of course I will not go to this psychiatric assessment and I will wait to see how the magistrate intends to force me.” Indeed, we are all waiting. Now that the French authorities have begun to engage in the Soviet tactic of branding their opposition mentally incompetent, what other Soviet tactics will follow? Will thuggish “security personnel” knock on Le Pen’s door at three in the morning, and drag her off to a prison cell and physical and psychological torture? Will she end up in a camp where the truncheon will be employed liberally until she emerges “reeducated,” loving Big Brother and proclaiming that Islam is religion of peace and tolerance that has nothing whatsoever to do with terrorism?

These kinds of scenarios are not hysterical fantasies anymore, if they ever were. If Le Pen is ordered to undergo psychiatric examination for the completely sane act of opposing the Islamic State and refuting claims that her movement is like it, then all bets are off. France, like Britain, is rapidly descending into totalitarianism, with Biden’s U.S. not far behind, and there is no telling where it will end. If thoughts that dissent from the Leftist establishment agenda can be prosecuted and declared to be evidence of insanity, then the door has been opened to all the rest of the features of the reign of terror that always accompanies the rule of the hard-Left.

And so we will soon see. Will French authorities convict Le Pen, and fine or imprison her? Or will she be declared mentally incompetent and confined to a psychiatric hospital? Will others who declare that Islam is not a religion of peace and that mass Muslim migration into Europe is unwise be likewise declared insane and carted off to hospitals and/or prisons? Will France and other Eurosocialist autocracies open gulags for those who dare to say that jihad terror is something that decent people should oppose?

Le Pen also stated: “It’s really incredible. This regime is really starting to worry me.” You and me both, sister. But she is already backpedaling: in a debate Thursday, Macron’s Interior Minister Gérald Darmanin asserted that Le Pen “has gone a bit soft…you need to take some vitamins, you’re not tough enough here.” He explained: “If I understand you right, you’re prepared to not even legislate on religion, and you say that Islam is not even a problem. You’ve gone quite far, it’s going to disappoint quite a lot of your voters I imagine.”

Le Pen agreed: “Yes, I can confirm that I don’t intend to attack Islam, which is a religion like any other. And, because I am strongly attached to our French values, I want to conserve total freedom of religion. That’s my opinion.”

Great. But what if many adherents of that “religion like any other,” working from its most important sacred texts, believe that freedom of religion should be accorded to them, but not to those of other religions, at least without the severe restrictions of dhimmitude? Marine Le Pen appeared to be the only French politician who was willing to face that problem. Darmanin isn’t: he has already stated that “Islamism, the most powerful ideology in the world, has deprived Islam of its voice,” thereby assuming a distinction between “Islamism” (which presumably indicates Islam’s political, violent, and supremacist aspects) and genuine Islam that does not exist and has never existed in Islamic tradition. Now, with Le Pen under fire and apparently buckling under the pressure, France may lose its best hope of staving off the inexorable advance of “Islamism.”