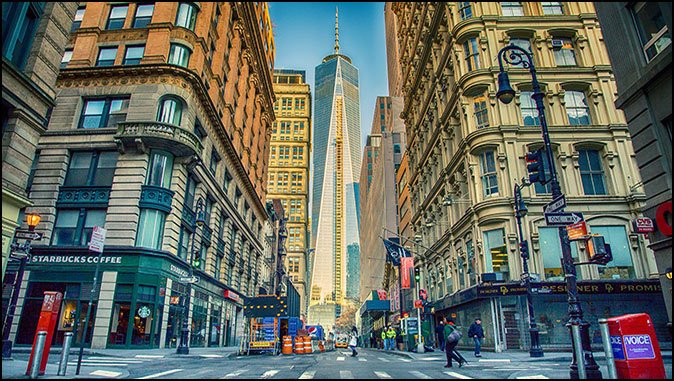 Manhattan DA Targets Trump After Giving Epstein and Weinstein a Pass
New Yorkers are dying, but DA Vance is going after Trump.
By Daniel Greenfield

NYPD Twitter accounts, like most official government social media, are usually boring. So it was highly unusual when the police account for South Manhattan blasted the borough’s DA.

“Manhattan DA Cy Vance where are you? No show at any shooting scene!!! Our community is being attacked, there have been 24 people shot in the city in the past 24 hours….Where Are You!!!,” the official police account blared after a bloody July 4th weekend.

The Manhattan district attorney’s poor relationship with the police had cratered when he announced that he was giving Black Lives Matter rioters a pass. That included the BLM racist who had scrawled obscene and hateful graffiti on the walls of St. Patrick’s Cathedral.

In response, the NYPD pulled away officers assigned to Vance’s office to handle crowd control.

But Cyrus Vance Jr., the son of Jimmy Carter’s secretary of state, who had resigned to protest Carter’s approval of a military operation to rescue the Iran hostages, has other priorities.

And he pursued a Supreme Court case to get hold of President Trump’s tax returns.

While New York City was enduring a horrifying wave of violence, with 10 dead in 30 shootings in just one Sunday, Vance was busy fighting a national battle against President Trump. Even as the NYPD was shaming Vance for refusing to come to the scenes of the shootings bloodying the city, Manhattan’s aristocratic DA was busy burnishing his image with leftist virtue signaling.

Shootings are up 130% and burglaries are up 118%, but Vance was busy hailing his “tremendous victory” in the Supreme Court, not for New Yorkers, but for the Democrat Party.

Vance has never been especially interested in conventional crime anyway. The blue-blooded official, who despises the men and women in blue, had blown through almost $250,000 on dining and travel expenses in 5 years by doing things like staying at a five-star hotel in Paris and a London hotel with a rooftop pool overlooking St. Paul’s.

The money came out of the $800 million asset forfeiture fund under Vance’s control which has also been used to send cash to pro-crime groups and legal aid societies. The Manhattan DA’s office is effectively funding its own opposition in court while Vance lives the high life.

And that money is helping protect criminals and put them back on the street.

While Vance has been demanding to see President Trump’s taxes, and even went to the Supreme Court for his fishing expedition, it’s his own finances that ought to be under scrutiny.

After a model complained about being assaulted by Harvey Weinstein, Vance’s office chose not to prosecute. One of Weinstein’s lawyers was Vance’s former law partner who had donated $24,000 to the DA and then another $10,000 after the case was dropped.

That money was part of the over $2 million that Vance had gotten from lawyers and law firms.

Like any good public servant, Vance promptly ordered an “independent review” of his donations by a non-profit partly funded by the corporate intelligence company that had gone after Harvey Weinstein’s accusers. And whose corporate chairman had, obviously, donated to Vance.

Vance’s office had pursued the “investigation” of the assault by Harvey Weinstein by pressuring the victim’s roommates into portraying her as a stripper or a prostitute.

The NYPD’s Manhattan Twitter accounts may have tried to shame Vance, but he has no shame.

In 2011, Vance’s office had asked a judge to reduce Jeffrey Epstein’s sex offender status to the lowest possible level which would have kept the pedophile off a public registry of sex offenders.

The Board of Examiners of Sex Offenders had rated Epstein at a high risk of reoffending.

“I have to tell you, I’m a little overwhelmed because I have never seen a prosecutor’s office do anything like this,” Justice Ruth Pickholz replied.

But Vance and his office often do things you never seen a prosecutor do before.

Even while New Yorkers are being shot at rates that are taking the city back to the worst days of the 70s and 80s, Vance is obsessively going after associates of President Trump.

Vance is not only chasing Trump’s taxes all the way to the Supreme Court, while ignoring the NYPD’s outcry over the death toll in Manhattan, he’s also chasing Paul Manafort.

Vance’s pursuit of Manafort was already shut down on double jeopardy grounds, but the Trump-chasing DA isn’t about to give up on trying the already imprisoned campaign figure on charges of conspiracy and mortgage fraud because Manafort claimed that his daughter was living in his SoHo condo on his mortgage application, when he was actually renting it on AirBnB.

If everyone in New York who did that sort of thing were put on trial, the prisons would be full.

Meanwhile, when asked about the huge jump in shootings, the Manhattan DA, flailed, claiming, “You can’t put your finger on what the precise thing is. We’re in the middle of a pandemic where 25,000 New Yorkers have died. So, I think there is fear. There is anger.”

The vast majority of New York City’s pandemic deaths affected senior citizens. That has nothing to do with why gang members are shooting each other on street corners and Vance knows it.

But Vance also knows that he’s facing multiple radical challengers, including a Muslim opponent backed by Linda Sarsour, and that the best way to triumph is by giving the finger to the cops, freeing criminals, denying that the crime wave has anything to do with the jailbreaks, and obsessively pursuing President Trump and his associates on the flimsiest of pretexts.

And that will help Vance win reelection so he can keep on staying at Parisian five-star hotels.

The real bread and butter of the Manhattan DA’s office isn’t putting away the muggers, murderers, rapists, and burglars who are terrorizing the borough like never before. It’s the $800 million slush fund that financed Vance’s lifestyle. And it’s the donations from lawyers and law firms that have stopped coming in once the conflicts of interest grew too serious.

And, without the legal cash, Vance’s best fundraising pitch is going to be targeting Trump.

That’s why Vance is throwing everything he has at President Trump and his associates while the bodies pile up in the hospitals and the morgues. Even as New Yorkers are shot and killed by the criminals that he ought to be putting away, he knows that his fate will be determined by how incompetently he fights crime and how vigorously he pursues the political enemies of the Left.

That’s why Amy Cooper was charged and the BLM vandal of St. Patrick’s Cathedral wasn’t. It’s why Vance is threatening cops and freeing BLM rioters. The worse Vance is at fighting crime and the better he is at fighting Trump, the more likely he is to win over Democrat voters.

And that’s why the bodies and the Trump lawsuits are piling up in New York City.