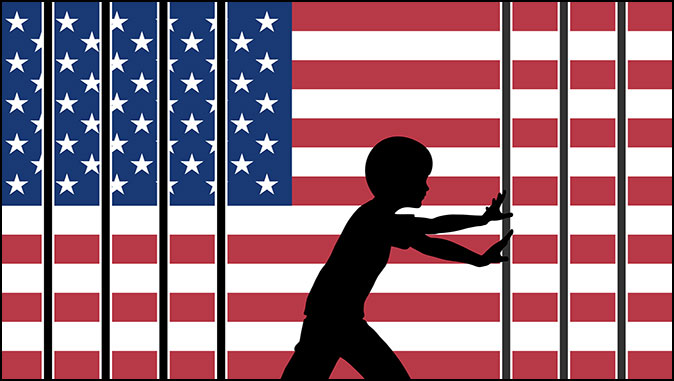 Joe Biden said, “I respect no borders!” Well, neither do thieves, thugs, tyrants, and totalitarians. Nor do drug lords, terrorists, pedophiles, disease carriers, and job seekers. Thinking Americans know that there must be order in everything. Without borders, there are no nations, but then, that’s what leftists want. Protestors chant, “No borders, no walls, no USA at all!” Their demand for amnesty, sanctuary cities, and open borders is a plan for anarchy.

Amnesty is a program pushed by pathetic progressives, even Evangelical progressives, to decriminalize millions of illegal aliens giving them citizenship. Many of the migrants are diseased, deranged, and dangerous as thousands of Americans have discovered. With this vast number of people from other cultures, languages, and religions, we are seeing a massive shift in American culture not experienced in our history.

My critics declare that I am unkind, unreasonable, and even unchristian for opposing amnesty and sanctuary cities; however, their charge is not based on solid reasoning or the Scripture. They distort the Scripture to make it fit their unreasonable, unconstitutional, and unbiblical demands.

We are told that the illegal immigrants are trying to escape Islamic tyranny, gangs, and poverty so America should make room for them since we are a Christian nation. Well, first of all, only people can become Christians; however, a nation can become Christianized or influenced by the Bible. Secondly, almost all my critics and supporters of amnesty and unlimited immigration confuse what a person should do with what a nation should do. All people who interpret ancient literature know one of the first questions that must be answered is, “To whom was this written and why.”

Pro-amnesty Evangelicals are not asking that question. Exodus 23:9 is usually used by the Bible-twisters to support their cause; however they use a flawed hermeneutic to build their case. “Also thou shalt not oppress a stranger: for ye know the heart of a stranger, seeing ye were strangers in the land of Egypt.” That passage is dealing with a person’s obligation, not national obligations. Of course, those religious leaders who use that verse know that but are being deceitful to establish a very shaky principle.

It is easy to prove my contention about this being a personal obligation. Verse 3 of that chapter warns the ancient Jews (and us today), “Neither shalt thou countenance (give approval) a poor man in his cause.” Moses was warning us about showing favor to a person because of his condition, whether rich or poor. We are not to be swayed by our emotions but by justice. The ancient maxim is, “Let justice be done, though the heavens should be dissolved.”

I heard one of the great evangelists of the last generation say, “Do right though the stars fall from Heaven.” The illegal aliens have not done right. They resolutely broke our laws and crashed our gates and forced themselves in front of others who have followed our laws and procedures. There are four million people who are waiting in line legally. The illegal aliens refused to wait. Their arrogance and audaciousness is astounding.

Furthermore, no one will tell me just how many immigrants are we expected to admit? Is there a limit? Do we wait until the ship is sinking before we realize that there are limits? If an overcrowded ship goes down then everyone is lost. Do gooders (as opposed to those who do good) are not the most logical thinkers.

Jim Wallis (another do gooder who doesn’t think logically) is the president of the leftwing religious outfit Sojourners who declared, “Evangelicals finally realize that how we treat the stranger, these 11 million undocumented people, [No, it is now 22 million] is how we treat Christ himself.” Jim must have been sleeping during his hermeneutics class in seminary because he did not get that from the Bible. Of course, Christians are to be kind, gracious, helpful, but that does not translate into being suckers, softies, and sycophants. We could really show how kind, gentle, gracious, and generous—as well as unwise, unreliable, and unhinged—we are by emptying all our prisons!

Radical Andrew Gillum, Congresswoman Alexandria Ocasio-Cortez and others want to empty prisons while Joe Biden pledged to cut the U.S. incarceration rate by more than 50%.

And the most hard core felons could move into their neighborhoods.

Wallis went on to say the leadership of the Evangelical Immigration Table (EIT which includes the National Association of Evangelicals and the Ethics and Religious Liberty Convention of the Southern Baptist Convention) and the evangelical community have “never been more united on an issue.” Jim has one of two problems: he is either disingenuous or uninformed because the vast majority of evangelicals want illegal immigrants to go home. A Pulse Opinion poll revealed that 78% of Evangelicals surveyed believed that the biblical command to “love the stranger” means “to treat the stranger humanely while applying the rule of law.” Additionally, a recent Pew Research Center poll showed only 25% of white Evangelicals believed the U.S. had a “responsibility” to accept refugees into the country.

Wallis is wrong again but then, he is used to that.

Christians are commanded by Christ to treat others the way we want to be treated. Let’s return to Exodus 23:9: “Also thou shalt not oppress a stranger: for ye know the heart of a stranger, seeing ye were strangers in the land of Egypt.” But that has nothing to do with illegal aliens. Fuzzy preachers neglect to tell their congregations that the Jews were in Egypt by invitation and were not trespassers as our modern invaders. In fact, the Jews were special guests as long as Joseph was alive and a friendly Pharaoh reigned.

They were strangers in Egypt (but not illegal aliens) even though they ended up as slaves. These verses do not apply to the immigration issue even slightly. Illegal aliens purposefully chose to break our laws, even arrogantly demanding entrance into our nation expecting to be cared for upon their arrival. They are not sojourners or strangers but scoundrels and are encouraged to break our laws by many leftwing religious groups, even some Evangelicals.

Of course, some of these leftwing Evangelical groups get paid $1 850.00 for each immigrant they settle in an American city. Follow the money.

Other desperate defenders of open borders tell us Joseph, Mary, and baby Jesus were migrants fleeing into another land for safety so American immigration laws should reflect that fact. However, it is not a fact. The family were not aliens since they were part of the Roman Empire as was Egypt at that time. Moreover, it was perfectly legal to travel from one Roman province to another. Loose Evangelicals should be ashamed of their distortion of Scripture to support a very tenuous position.

While the Evangelicals are correct in that the Kingdom of God has no borders and welcomes all who qualify through faith in Christ, the city of Jerusalem, the nation of Israel, and all other nations, states, cities, and villages and their gated estates do have distinct borders.

This is another example of how far left many Evangelicals are. Evangelical churches are wallowing in diversity and choking on heresy.

Many soft Evangelical leaders are hypocrites but it pays well.

(Dr. Don Boys is a former member of the Indiana House of Representatives who ran a large Christian school in Indianapolis and wrote columns for USA Today for 8 years. Boys authored 18 books, the most recent Muslim Invasion: The Fuse is Burning! eBook is available here with the printed edition (and other titles) at www.cstnews.com. Follow him on Facebook at Don Boys, Ph.D.; and visit his blog. Send request to [email protected] for a free subscription to his articles, and click here to support his work with a donation.)