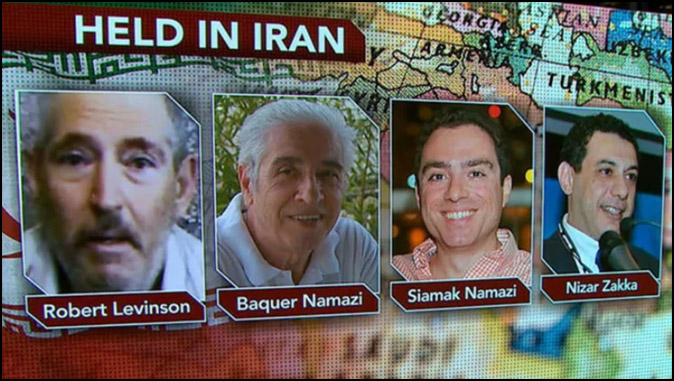 Longest Held US Prisoner in Iran Goes on Hunger Strike to Get Biden’s Attention
“All I want sir, is one minute of your days’ time.”
By Daniel Greenfield

If Siamak Namazi were a woke black lesbian WNBA player who hated America and then got caught with drugs in a foreign country, he’d already be home at any cost.

Even if it meant freeing one of the most dangerous terror arms dealers in U.S. custody.

Unfortunately for him, he’s not. So NBA players, MSNBC commentators, racial activists and the rest of the political influencers that call the shots in the Biden administration couldn’t give a damn.

He had to go on a hunger strike to get a story written about him.

An American wrongfully detained in Iran is calling on President Joe Biden to take notice of US detainees there, launching a hunger strike Monday to mark seven years since he was left behind in a prisoner swap that brought other Americans home.

In a letter to Biden, Siamak Namazi called on the US president to think of him every day for the seven days he intends to carry out the hunger strike commemorating the grim milestone.

“In the past I implored you to reach for your moral compass and find the resolve to bring the US hostages in Iran home. To no avail. Not only do we remain Iran’s prisoners, but you have not so much as granted our families a meeting,” wrote Namazi, who is one of three Americans who remain wrongfully detained in Iran. Emad Shargi and Morad Tahbaz have also been imprisoned there for years.

“All I want sir, is one minute of your days’ time for the next seven days devoted to thinking about the tribulations of the U.S. hostages in Iran,” Namazi wrote to Biden. “Just a single minute of your time for each year of my life that I lost in Evin prison after the U.S. Government could have saved me but didn’t. That is all.”

“Alas, given I am in this cage all I have to offer you in return is my additional suffering. Therefore, I will deny myself food for the same seven days, in the hope that by doing so you won’t deny me this small request,” he said.

“When the Obama Administration unconscionably left me in peril and freed the other American citizens Iran held hostage on January 16, 2016, the U.S. Government promised my family to have me safely home within weeks,” Namazi wrote in his letter Monday. “Yet seven years and two presidents later, I remain caged in Tehran’s notorious Evin prison, holding that long overdue IOU along with the unenviable title of the longest held Iranian-American hostage in history.”

Unless Namazi decides to identify as a black lesbian and takes a knee during the anthem, the Biden administration will show as much interest in him as the Obama administration did.

A National Security Council spokesperson said the Biden administration remains “committed to securing the freedom of Siamak Namazi and we are working tirelessly to bring him home along with all US citizens who are wrongfully detained in Iran, including Emad Shargi and Morad Tahbaz.”

The Biden administration has provided Iran with billions in sanctions relief, yet never bothered to trade that giveaway to the terrorists for American prisoners.

“President Biden, Siamak is begging you, my family is imploring you. Please, please, take what it takes to make those courageous decisions that we know you are capable of,” Babak told CNN.

When it comes to Iran, we know what courageous decisions Tehran Joe is capable of.

In 2002, he addressed the American Iranian Council whose founder had run for the presidency of Iran. Later that year, Biden was raising big money from Iran supporters and urging that Iran be allowed to join the WTO. In 2007, Biden warned that if Bush bombed Iran, he would impeach him. A year later, he told Israelis that they would have to accept Iran’s nuclear program.

As the Freedom Center revealed last year, one of Biden’s bundlers during his presidential campaign was the executive director of NIAC Action and the former policy director of the National Iranian American Council: often referred to as the Iran Lobby.

We also exposed the fact that the Iranian hackers who appear to have run a false flag operation for Biden in the 2020 election were linked to the Iranian Revolutionary Guard Corps. In 2007, Biden was one of only 22 senators to vote against designating the IRGC as a terror group.