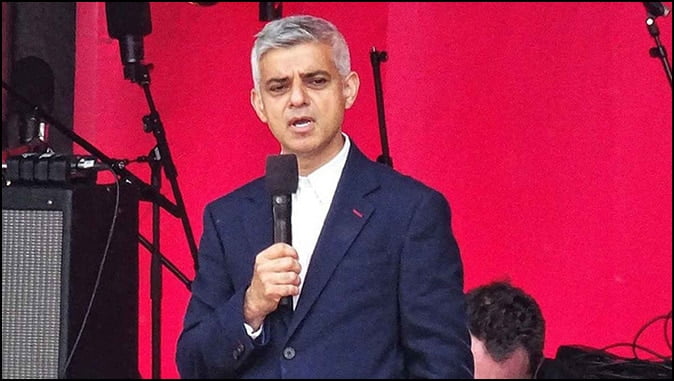 London Mayor Says Iran is “Ahead of Us In Terms of Combating the Coronavirus”
Sadiq Khan escalates the British Left’s war against reality.
By Robert Spencer

Does even London’s notorious Muslim mayor, Sadiq Khan, really believe this? IPT News reported Monday that Khan “praised Tehran for being ‘ahead of us in terms of combating the coronavirus. I congratulate the Iranian officials for this.’”

Khan apparently made this spectacularly risible statement in a video conversation with Tehran Mayor Pirouz Hanachi. According to a Tehran Times report, Khan also promised to “discuss the problems that Tehran is facing due to sanctions” with British officials, “and I hope that this is solved in the near future.”

IPT noted laconically that “Iran has been overwhelmed by coronavirus cases, with more than 90,000 people infected and nearly 6,000 reported dead. There is widespread skepticism that Iran is grossly under-reporting the true casualty rate.”

Yes. And Khan has every reason to know that. His congratulating Iran is of a piece with the relentless push we see everywhere: Muslims, we’re told, invented virtually everything that has made life in the contemporary West comfortable. Muslims, our moral superiors constantly insist, established tolerant and pluralistic societies while Europeans were still painting themselves blue and living in caves. In virtually everything, we are told again and again that Muslims are ahead, Muslims were first, Muslims blazed the trail.

One notorious example of this came last October, when the jihadi mouthpiece Al Jazeera reported happily about “a major exhibition in London’s British Museum called Inspired by the East, that explores the significant – yet often unacknowledged – influence of Eastern culture on the West.”

The Museum invited visitors to “discover centuries of art inspired by the Islamic world,” and co-curator Julia Tugwell said: “People might forget that there has been an exchange between East and West for centuries, much longer than we think and while, of course, some of that has been warfare, a lot of it has been diplomatic relations and artistic exchange. Looking at this through an artistic medium and showing how there has been this interest in the ‘other’ from both directions over the years shows that there has been an ongoing dialogue.”

Not to be outdone, Catherine Futter of the Nelson-Atkins Museum of Art in Kansas City added: “We still see Islamic arches and patterns incorporated into architecture and perhaps we see them so often they seem part of our currency and we have forgotten their sources – whereas in the 19th century they would have seemed far more unusual. One of the things that is exciting about this exhibition is that it is highlighting that important contribution to art, culture, science and technology made by the Islamic world.”

Neither Tugwell nor Futter explained how any Islamic influence on Western art was severely limited by the fact that Sharia forbids representation of the human form. Or would any discussion of that reflect negatively upon Islam and Sharia, and so is forbidden to be stated?

Does the British Museum have any plans to host an exhibition on how Western art influenced the Islamic world, a topic about which there is a great deal that could be said, ranging from the cultural appropriation of Byzantine church architecture to the stylistic similarities of Shi’ite iconography to Western art? The answer to both questions is “of course not.” The Inspired by the East exhibition was just another example of the British intelligentsia’s ongoing efforts to compel Britons to be ashamed of their own culture and heritage, and to think of Islamic culture as antecedent and superior to their own. It was just more of Britain’s ongoing cultural suicide. And hardly anyone, of course, even noticed.

There is an all-out effort to make Westerners think not just that Islam is another one of the world’s great religions, but that Islam, Islamic culture, Islamic history, and Islamic mores are superior to those of the West. And so why shouldn’t London’s Muslim mayor claim that the Islamic Republic of Iran is ahead of Britain in combating the coronavirus? It’s all part of the ongoing effort to render Britons complacent and ashamed to resist what is being done to their free society in the name of multiculturalism and pluralism. This will, as they say, not end well.

Robert Spencer is the director of Jihad Watch and a Shillman Fellow at the David Horowitz Freedom Center. He is author of 19 books, including the New York Times bestsellers The Politically Incorrect Guide to Islam (and the Crusades) and The Truth About Muhammad. His latest book is The Palestinian Delusion: The Catastrophic History of the Middle East Peace Process.

Israel - Don't Go There By Alf Cengia Israel - don't go there. When it…

Did Dr. Fauci Fund the Research That Led to Coronavirus Outbreak?

Did Dr. Fauci Fund the Research That Led to Coronavirus Outbreak? By Bryan Fischer The…

The Left, President Trump, and Jesus

The Left, President Trump, and Jesus By Jonathan C. Brentner It was an overcast day…