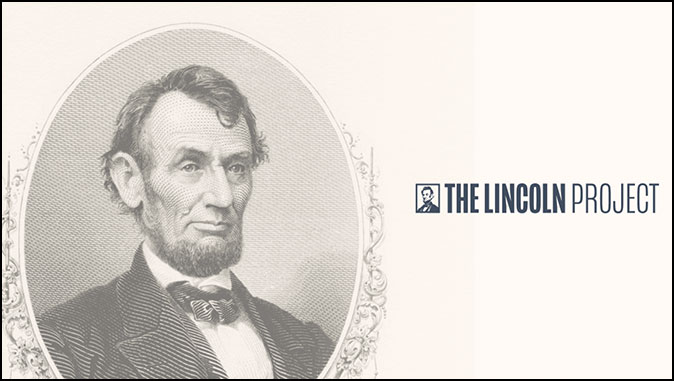 The Lincoln Project is a super PAC whose declared mission is to “defeat President Trump and Trumpism at the ballot box.” It was formed in 2019 by a group of Republicans-In-Name-Only (RINOs). Four of its co-founders wrote a self-righteous op-ed column, castigating “the craven acquiescence of congressional Republicans” to President Trump’s wishes. They don’t care if their super PAC’s expenditures in swing states help to bring about Democratic control of the Senate and to solidify an expanded Democratic majority in the House, so long as the end result is President Trump’s defeat. “Patriotism and the survival of our nation in the face of the crimes, corruption and corrosive nature of Donald Trump are a higher calling than mere politics,” they pontificated.

The Democrats and their friends in the mainstream media are over the moon with the Lincoln Project. Billionaire Democrats are their primary donors. In April 2020, the Lincoln Project went forward with its first TV ad endorsing Joe Biden. On July 31st, the Lincoln Project released a blistering anti-Trump YouTube ad entitled “We Will Vote.” It posed the voters’ choice this November as between President Trump and America – as if the increasingly left-leaning Biden and America were one and the same. “We will throw you and your failed cronies out of office,” the narrator warned the president in a sonorous tone.

With all the highfalutin rhetoric coming out of the mouths of the Lincoln Project’s leaders, they have created a hornet’s nest of self-dealing. The Center for Responsive Politics ran a story on its Open Secrets website last May regarding the Lincoln Project’s financial shenanigans. “The Republican super PAC has amassed a substantial war chest, but it has come under scrutiny for funneling money to its advisory board members and spending relatively little airing political ads to influence voters,” the article reported. “The Lincoln Project reported spending nearly $1.4 million through March. Almost all of that money went to the group’s board members and firms run by them.”

This pattern of self-enrichment has continued apace through this summer. Another of Lincoln Project’s co-founders and its treasurer Reed Galen, for example, owns an advertising firm that has been raking in lots of money from the Lincoln Project for so-called “vendor” services. Galen owns Summit Strategic Communications, which reaped the tidy sum of $5,865,264 from the Lincoln Project through July 21, 2020. This is based on Federal Election Commission data available electronically, according to the Center for Responsive Politics. The number of payments was 111. Mysteriously, the Lincoln Project does not appear on Summit Strategic Communications’ webpage of featured clients.

Galen, in his capacity as the Lincoln Project’s treasurer, is listed on a filing with the Federal Election Commission as the person who completed the form on expenditures to Galen’s own firm, Summit Strategic Communications. If this isn’t self-dealing par excellence, what is?

The Lincoln Project has put out grossly inaccurate ads that have gotten the attention of certain fact-checking sites. For example, the Lincoln Project’s “Mourning in America” ad incorrectly asserted that “Trump bailed out Wall Street, but not Main Street.” Main Street businesses have received considerable help in the form of the Paycheck Protection Program, which was approved overwhelmingly as part of the CARES Act by Congress before it was signed by President Trump. PolitiFact rated this ad as “false.”

Facebook relied on PolitiFact’s rating with its own warning label. The Lincoln Project then double downed on its false ad with a misleading Facebook post defending the ad. It accused “Donald Trump’s allies at Facebook” of “censoring our ‘Mourning in America’ ad with a ‘fact check.’” Project Lincoln’s post neglected to mention the independent source of the fact-checking.

Even Twitter – certainly no friend of President Trump – took the Lincoln Project to task. It labeled one of the Lincoln Project’s tweets, showing an edited clip from the president’s Independence Day address at the White House, as “manipulated media.”

The Lincoln Project’s take no prisoners strategy extends beyond President Trump to anyone in Congress the Lincoln Project’s leaders feel are the president’s “enablers.” They have even resorted to attacking the character of one of the Senate’s most moderate Republican senators, Maine Senator Susan Collins, who is running for re-election this November. The Lincoln Project has put out a vicious ad that accuses Senator Collins of being a “Trump stooge” and “a fraud.” The ad goes on with the baseless claim that “Mitch McConnell and Donald Trump control her voice. She makes excuses for corruption, for criminality, for cruelty, all while pretending she’s worried.” These malicious falsehoods and the character assassination are the Lincoln Project’s stock in trade.

During the current 116th Congress, Senator Collins voted in line with President Trump’s position 46.2% of the time. Even when she was voting more often with President Trump during the first two years of his term, Senator Collins opposed him on some key issues. For example, she supported ending U.S. military assistance to Saudi-led forces in the war in Yemen, contrary to the president’s position. She supported reinstating net neutrality rules, which the president opposed. She voted against the White House immigration proposal. And Senator Collins voted against repealing major parts of the Affordable Care Act as well as the Senate’s “skinny repeal” health care bill, both of which President Trump was pushing.

The Lincoln Project indulges in lies and distortions. They are wrapped in glossy ads, with millions of dollars going to Lincoln Project co-founders’ businesses in the process. Their use of Abraham Lincoln’s name for their shady project is a sacrilege.