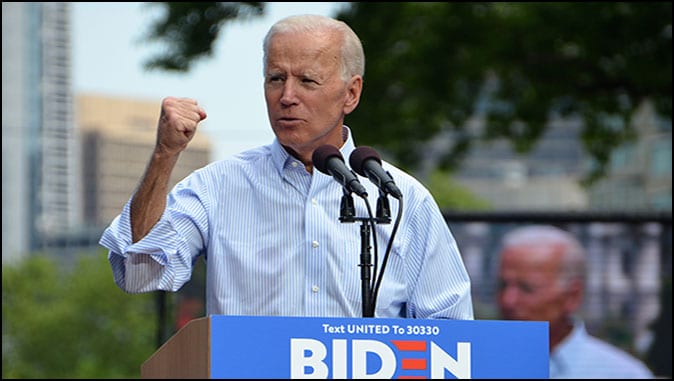 Leftist ‘Journalists’ Float the Idea That Criticizing Joe Biden Is a Danger to Democracy
Shamelessly anointing oneself an opinion-shaper and behaving accordingly.
By Robert Spencer

The Leftist political and media elites are desperately afraid of Donald Trump, even more than they were when they relentlessly defamed him and tried to run him out of office with a hoax collusion conspiracy and a tempest in a teapot over a routine phone call. A Trump return to the White House on January 20, 2025, would represent a massive repudiation of those who have arrogated to themselves the authority to tell us what to think, and those self-appointed intellectual and moral superiors are doing everything they can think of to try to preserve their crumbling hegemony. The New Republic, one of the flagship publications of the Left before it became completely authoritarian and irrational, on Saturday joined Dana Milbank of the Washington Post in offering one of the most absurd and dangerous recommendations for how to stop Trump and his supporters: stop criticizing Joe Biden.

Yes, that’s right: The New Republic is mulling over destroying our free society in order to save it. concerns mount over the future of free and fair elections, a debate has broken out about whether the media must protect Biden to save the republic. Jason Linkins, a deputy editor at The New Republic, begins his piece by saying: “This week, President Joe Biden hopped onto Zoom in an effort to shepherd the world along the path to stronger global democracy, during a two-day summit with other world leaders. He’ll be making his case, however, amid growing concerns about democracy here at home.”

The concerns about democracy that Linkins is talking about aren’t the lingering questions about election fraud in 2020. On the contrary, Linkins is talking about the supposed destruction of democracy that the Left would have us believe would ensue were Trump to attempt to return to the White House in 2024. “Whether we like it or not,” says Linkins, “there is reason to be gravely concerned. But against this backdrop, an interesting debate has broken out about the press’s role in protecting our too-fragile institutions and raveled civic fabric from a Trumpian assault — and whether the media, in an effort to support democracy, must unflinchingly support Biden, as well.”

The idea that the media has been doing anything other than unflinchingly supporting Biden is absurd on its face, but Linkins repeats an astonishing assertion that was recently made by Dana Milbank, who offered a bunch of charts and graphs to make you stop believing your lying eyes and accept his claim that “Biden’s press for the past four months has been as bad as — and for a time worse than — the coverage Trump received for the same four months of 2020.”

This is a ridiculous claim on its face, as the media that went after Trump so ferociously and relentlessly has eagerly served as Biden’s handlers’ press agency since the beginning of this administration. If Biden has received any negative press at all, it’s because his administration has performed so astoundingly badly that even Old Joe’s establishment media sycophants can’t ignore it. But as far as Milbank is concerned, they’re playing a very dangerous game by noting Biden’s massive failures: “My colleagues in the media are serving as accessories to the murder of democracy.” This is because, says Milbank, “the country is in an existential struggle between self-governance and an authoritarian alternative. And we in the news media, collectively, have given equal, if not slightly more favorable, treatment to the authoritarians.”

Ironically, Milbank may actually be right: the country really does seem to be in an existential struggle between self-governance and an authoritarian alternative. But the real authoritarians here are those such as Milbank himself who believe that the media should become even more partisan and sycophantic in its coverage of Biden. A hallmark of a free society is a free press; the idea of the press being bound to only one point of view, whether by government control or the ideological lockstep that prevails in the media today, is detrimental to any free society.

Even The New Republic’s Linkins seemed to realize this, at least to some degree, albeit not clearly enough to stop him from presenting Milbank’s prescription as a serious proposition rather than denouncing the Post “journalist” as the fascist he is. Linkins offers a mild objection to Milbank’s recommendation: “Blind fealty to heads of state is the hallmark of dictatorships, not democracies…. Accountability is central to any cause of democracy.” Linkins argues for a free press on the basis of what he perceives as the need for more socialism: “When Jen Psaki rudely mocks the idea of sending free rapid tests to every American, any defender of democracy — keenly aware of the public need and the potential to revive such civic spirits — would and should offer a riposte.”

Linkins is not a genuine supporter of democracy himself. He comes out strongly for the Democrats’ right to cheat in elections, accusing Republicans of “Jim Crow-era electoral tactics” for their efforts to restore some integrity in the voting process. He concludes that “no true ‘partisan for democracy’ can simply be a reflexive defender of a politician.” That’s true, but he can’t sustain this moment of moral clarity, and adds: “No matter how well intended, adopting this tendency will only further undermine the civic edifice — and it plays into the hands of democracy’s would-be gravediggers. But politicians are the servants of democracy; its beneficiaries are ordinary Americans. They are who truly deserve our best effort and our best coverage.”

If Jason Linkins were to think honestly about whose policies benefited ordinary Americans, he would be offering Donald Trump his “best effort” and “best coverage.” But even better, as a “journalist,” he should simply report the facts of the case, without editorializing at all. It’s much more fun, however, to anoint oneself an opinion-shaper and behave accordingly. Don’t expect these little authoritarians to stop doing that anytime soon.