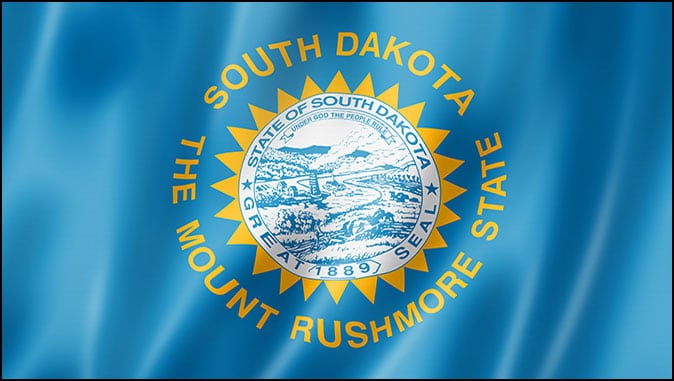 Kristi Noem Vows to Fight Hateful Critical Race Theory
The 1776 Pledge to Save Our Schools takes aim at the destructive ideology.
By Matthew Vadum

In May, South Dakota Gov. Kristi Noem became the first candidate nationwide to promise to combat action civics and the un-American ideology of critical race theory by signing the 1776 Pledge to Save Our Schools, a pledge drafted by a new patriotic education nonprofit.

“Teaching our children & grandchildren to hate their own country & pitting them against one another on the basis of race or sex is shameful & must be stopped. I’m proud to be the 1st candidate in America to sign ‘The 1776 Pledge to Save Our Schools,’” Noem wrote on Twitter.

It also came as Democrats promote the proposed “Civics Secures Democracy Act” in Congress, which involves handing out $1 billion per year in federal grants over six years for K–12 curriculum development, teacher training, and research on the teaching of history and civics. Some of the money will go toward action civics and promoting critical race theory.

“Many establishment Republicans are slowly awakening to this being an issue that people care about, said Russ Vought, who ran the Office of Management and Budget in the Trump administration and is now president of the Center for Renewing America, which focuses on anti-CRT efforts at the grassroots and state level.

“And I would say that the grassroots cares about this and election integrity more than any other issue right now. So, if you’re a Republican, and you are not doing something to combat critical race theory, you have no idea where your people are.”

Another group, 1776 Unites, which has the support of an array of black conservatives and liberals, scholars, writers, educators, activists, journalists, and entrepreneurs, was created earlier this year, as FrontPage reported in March. The group is a project of the Woodson Center, a community transformation and empowerment organization founded in 1981 by Robert L. Woodson Sr.

The group “maintains a special focus on voices in the black community who celebrate black excellence, reject victimhood culture, and showcase the millions of black Americans who have prospered by embracing the founding ideals of America,” according to its website.

Noem, a Republican, elaborated on her tweet in an op-ed with former Housing and Urban Development Secretary Ben Carson.

“A great nation cannot survive if its citizens are taught to hold their own country in contempt. Our Founders knew that people are not perfect – that is why they created an ingenious constitutional system of checks and balances. But that system also requires strong civic engagement by citizens who understand and defend the values and traditions that make America special,” Noem and Carson wrote.

“Critical race theory is a deliberate means to sow division and cripple our nation from within – one brainwashed and resentful student at a time. And while foreign adversaries like China and Russia surely work to inflame our divisions, we are doing this to ourselves.

Whether or not we can defeat this ascendant anti-Americanism is perhaps the most important cultural challenge of our lifetime, and fortunately a growing number of courageous parents, grandparents and teachers understand the stakes and have begun to speak out and push back.”

“By focusing on this issue, we have the opportunity to create an entirely new, diverse coalition of voters for these values – one built upon a genuine love for our nation and our children,” they wrote.

“Critics often deride our push for truthful, patriotic education by claiming that we don’t want to have ‘difficult conversations’ about troubling aspects of our history. They’re wrong. Our children and grandchildren should understand the full picture – our fundamental values, our greatest achievements, and the long struggles to overcome injustice as well.”

For those not up-to-speed on the latest leftist euphemisms, action civics refers to K–12 students being made to protest and lobby for political causes for course credit.

CRT supporters denounce American culture and history as “Eurocentrism” and “whiteness.” It is “a variation of critical theory applied to the American context that stresses racial divisions and sees society in terms of minority racial groups oppressed by the white majority,” according to the 1776 Commission’s report.

“Equally significant to its intellectual content is the role Critical Race Theory plays in promoting fundamental social transformation,” the report states, “to impart an oppressor-victim narrative upon generations of Americans. This work of cultural revolution has been going on for decades, and its first political reverberations can be seen in 1960s America.”

The 1776 Commission was at odds with the anti-American ideology of Joe Biden, now our illegitimate, placeholder president, so of course he disbanded it hours after he was installed banana republic-style, surrounded by thousands of soldiers.

The pledge Noem signed is promoted by 1776 Action, a new 501(c)(4) nonprofit founded by Adam Waldeck, former aide to former Speaker of the House Newt Gingrich. Gingrich and Carson support the group.

The anti-CRT movement has made a lot of inroads in Virginia.

Glenn Youngkin, Pete Snyder, Sergio de la Peña, Amanda Chase, Peter Doran, and Kirk Cox, candidates for the Republican Party nomination for governor of Virginia in May, also signed the pledge. Youngkin, who won the race, told Fox News before his victory: “As governor, I will not allow the political agenda of critical race theory to be taught in our schools. We will replace it with a high-quality civics curriculum.”

Loudoun County, Virginia, has become “ground zero” in the fight against critical race theory-based indoctrination in schools nationwide, according to Ian Prior, executive director of Fight for Schools, a Virginia political action committee.

CRT must be obliterated because it “seeks to view everything through the lens of race and believes all institutions, traditions, language, and history of this country are systemically racist,” he said.

In May, Fight for Schools launched a petition drive to remove 6 radical, pro-CRT members of the 9-member school district board—Denise Corbo, Beth Barts, Brenda Sheridan, Atoosa Reaser, Ian Serotkin, and Leslee King, all of whom are Democrats, The Epoch Times reported.

The 1776 Action pledge itself consists of a statement signed by the candidate promising constituents that he or she “will take concrete steps” to fix K-12 public schools.

The candidate pledges to “restore honest, patriotic education that cultivates in our children a profound love for our country,” and to “promote a curriculum that teaches that all children are created equal, have equal moral value under God, our Constitution, and the law, and are members of a national community united by our founding principles.”

Among 1776 Action’s objectives are “supporting candidates for school boards, state boards of education, and other relevant offices who believe in teaching our children to love America,” and “defeating local and state education officials who indoctrinate our children with the false and divisive lies of the radical Left.”

The group also uses targeted messaging campaigns to pressure colleges and universities “to stop the anti-American propaganda,” and promote “pro-American alternatives to the radical version” of American history taught in so much of the country.

“1776 Action is an issue advocacy organization focused on stopping the anti-American indoctrination happening in our schools,” the group said. “Our goal is to make this a central voting issue in state and local elections where decisions over education are primarily made.”

“We’re doing that through ongoing ad campaigns, as well as the release of The 1776 Pledge to Save Our Schools to help parents evaluate relevant candidate and officials.”

“In classrooms across the country, the far Left is successfully indoctrinating children with anti-American lies and divisive theories that pit them against one another based on race and gender,” Waldeck told this writer.

“We don’t have decades to waste trying to persuade them that they are misguided, and so 1776 Action was founded to defeat them politically, culturally, institutionally and financially.”