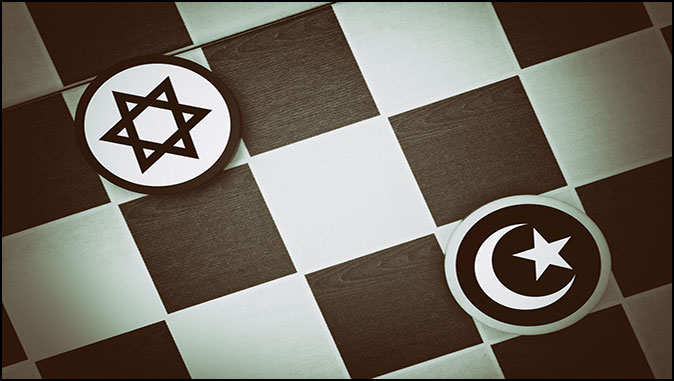 This past Sunday, July 11, 2021, the usual gaggle of “Jewish advocacy groups” gathered in Washington, DC, posturing and prattling on, allegedly against anti-Semitism, “in solidarity with the Jewish people.” As is their collective wont, once again, these groups blithely ignored any honest discussion of the overwhelmingly disproportionate source of contemporary Jew-hatred: Muslim Jew-hatred, animated by mainstream, doctrinal Islam. Even the courageous Boston area Rabbi who addressed the rally after surviving a recent knifing attack by an Egyptian Muslim, refused to mention this taboo reality.

Barely over 2-weeks prior to this “No Fear Rally,” there was a brazen illustration of the Koranic Jew-hatred openly espoused in U.S. mosques during a June sermon at the Islamic Center of Union City, New Jersey, posted on YouTube on June 25, 2021.

New Jersey imam Mohammad Abbasi, currently a City University of New York faculty member, and previously on staff at Rutgers University, maintained the Jews [“Israelites”], despite their small population in the Arabian peninsula at the advent of Islam, are mentioned so many times in the Koran, because of the extensive corruption, mischief, and tumult they wrought. Abbasi intoned,

[The Koran said:] ‘To the Children of Israel, in the Book,’ in their book, so it is on ours now, ‘you will certainly cause corruption in the land…’ I wish I had enough time to explain to you how many ways the word ’cause corruption’… how it emphasizes the concept of fasad and corruption that they are going to enact in this one word…’ ‘You will cause corruption’ – corruption, my brothers, is that you come to something that works and then you spoil it. That is what corruption is…So Allah said to the Israelites: ‘You will certainly cause corruption in the land.’ You are going to create mischief, tumult, corruption, in the earth – not in Arabia, where they were at the time, not in the Middle East – worldwide. I am not saying that, that is what God says. This is not political talk, this is not a conversation between the Prophet and his companions, that is a promise that came to pass…

I don’t want to leave you depressed; I want to give you the good news now. With the help of Allah they [the Muslims] will erase this filth called Israel.

Imam Abbasi is referencing, primarily, Koran 5:64, and his Koranic interpretation, or gloss, is not “radical.” Abbasi’s gloss on 5:64 comports fully with both the classical and contemporary mainstream understandings of this verse.

Muhammad Sayyid Tantawi (d. 2010), was one of the most renowned modern authorities on Koranic interpretation (or “exegesis”). He edited a magnum opus 15-volume contemporary Koranic commentary, and helped create the largest online website of such analyses. Tantawi served as Grand Imam of Al-Azhar University—Papal equivalent of Sunni Islam’s Vatican—from 1996 until his death. His 700 pp. Ph.D. thesis, (in English translation, Jews in the Koran and Traditions; completed 1966, published 1968), provided a summary gloss on the Koranic depiction of Jews, emphasizing its permanent relevance, while decrying Jews who rejected Islam as “maleficent deniers,” and granting Muslims license to extirpate Jewish “evil,” violently:

(The) Koran describes the Jews with their own particular degenerate characteristics, i.e. killing the prophets of Allah (see Koran 2:61/ 3:112 ], corrupting His words by putting them in the wrong places (4:46) , consuming the people’s wealth frivolously (4:161), refusal to distance themselves from the evil they do (3:120; 5:79), and other ugly characteristics caused by their deep-rooted (lascivious) envy (2:109)…only a minority of the Jews keep their word…[A]ll Jews are not the same. The good ones become Muslims (Koran 3:113), the bad ones do not…so use force with them and treat them in the way you see as effective in ridding them of their evil. One may go so far as to ban their religion, their persons, their wealth, and their villages.

The support and cooperation that the Jews had manifested during this age and which had helped them establish a country in Palestine is a temporary matter. This country [Israel] will not last long, but it will return to its Muslim people when they sincerely wage jihad and follow the precepts and teachings of their religion. Fakhir al-Din al-Razi [the great Koranic scholar] mentioned the connection between this verse and that one that has come before it: the Almighty showed that those Jews begrudge and reject Muhammad’s prophecy after providing evidence of its validity out of their envy, their love for money, prestige, and power. Then, the Almighty showed that after they preferred this world to eternity, it was no wonder that just as He- the Almighty-denied them the happiness of religion, He likewise denied them happiness in the world.

His saying “Every time they kindled the fire of war [against you], Allah extinguished it” means that whenever they waged a war against the Prophet (Muhammad) and the believers, and whenever they tried to sow the seeds of discord and animosity between them, Allah spoiled their plans, frustrated their cunningness, and cast horror in their hearts. The expression entailed in this honorable verse was driven from what was customary for Arabs at the time, namely, when they planned to wage a war on others, they would light a fire which they termed the fire of war. The expression is therefore a metaphor here. The Almighty likened wars to fire since wars entail devastation and human massacres and such calamities that are likely to ensue from a consuming, raging and devastating fire. His saying “And they strive throughout the land [causing] corruption, and Allah does not like corrupters” is an appendix to confirm what had preceded concerning the despicable characteristics with which the Almighty had stamped the Jews. The general meaning is: these Jews save no effort to plot against Islam and its people, they surreptitiously strive to cause corruption throughout the land by inciting sedition, and strife and evoking animosity and envy among people. Allah Almighty does not like corruptors; He hates even loathes them for they prefer perversity and going astray to the right and straight path, and they like evil more than they like good…The verse also revealed some aspects of their vices and stubbornness. Likewise, it showed that the Almighty hates them for they corrupt the land rather than ameliorate and make it better.

The late Grand Imam Tantawi, and local New Jersey imam Abbasi, epitomize countless other traditional Muslim theologians who continue to preach the same “sacralized” Islamic Jew-hatred the Muslim creed has inculcated over almost a 14-century continuum. The bitter fruit of their efforts is apparent. Extreme Antisemitism, as gauged by the Anti-Defamation League’s own validated survey instrument has remained ~3-times more common amongst Muslims than any other ethno-religious group worldwide, for the past two decades, ongoing.

Feckless, see-no-Islam Jewish advocacy groups, as demonstrated by their hollow preening at the risibly dubbed “No Fear Rally” in Washington this past Sunday, lack the courage to confront the global scourge of institutionalized, canonical Islamic Jew-hatred. Of what value are these organizations then, one might ask?