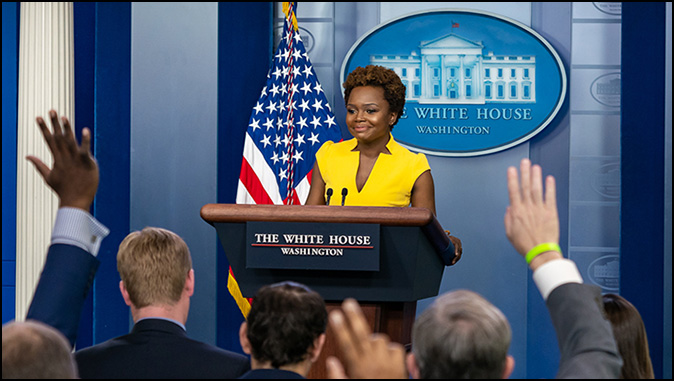 Karine Jean-Pierre: It Was ‘Unconstitutional’ for Supreme Court to Overturn Roe
Old Joe and his team of tokens, clowns, hacks, and psychopaths never disappoint.
By Robert Spencer

If the Biden administration’s dumpster fire didn’t threaten to engulf us all, Old Joe and his team of tokens, clowns, hacks, and psychopaths would be good for a few laughs. Nobody expects the president’s press secretary to be a great intellect, but a rudimentary understanding of how the American government works would be nice. Instead, on Wednesday we got Karine Jean-Pierre informing the nation that the Supreme Court’s Dobbs v. Jackson decision overturning Roe v. Wade was “unconstitutional.” Yes, she really said that.

Jean-Pierre said: “From day one, when, uh, when the Supreme Court made this extreme decision, uh, to take away, uh, uh, a constitutional right, uh, it was an unconstitul — unconstitutional action by them, a right that was around for almost fifty years, a right that women had to make a decision on their bodies, and how they wanna start their families…” This is not the sort of statement that yields to logical analysis, but it still raises questions: a constitutional right that was around for almost fifty years? Does Karine Jean-Pierre think that the Constitution was ratified in 1972?

She likely does, unless, of course, “public sentiment” tends in a rightward direction, in which case she would certainly argue, if the Court decision leaned to the Left, that the Court had to adhere to the legal principle and not bow to popular opinion. Hey, whatever works.

This is not, however, how the United States government is supposed to work. The Supreme Court is supposed to ensure fidelity to Constitutional principles, declaring that various laws are unconstitutional not because they are unpopular or out of favor with the political and media elites, but because they do not accord with the basic law of the land. That Karine Jean-Pierre would not know this, or not care, reflects poorly on America’s educational system as well as on the Biden administration.

For the record, Jean-Pierre graduated from Kellenberg Memorial High School on Long Island and has a Bachelor of Science from the New York Institute of Technology and a Master of Public Affairs from the School of International and Public Affairs (SIPA) at Columbia University. Probably somewhere in there the basics of how the federal government works came up, but the day-to-day emphasis was much more likely on pressing issues such as that ever-present nonexistent bogey, structural racism, as well as sexism and all the rest of the Left’s preoccupations. Nobody really had time for basic civics when what they were really concentrating on was how to tear it all down.

And so now we have people at the highest levels who don’t know anything about how the government is supposed to work. Of course, it also doesn’t matter to Biden’s handlers, because if they don’t get their way in Congress, they’ll put a stack of executive orders and emergency decrees in front of Old Joe and get what they want no matter what the little people think. If the Supreme Court acts up again, Karine Jean-Pierre can just declare their decisions “unconstitutional” again. And the whole circus will roll merrily on, until, of course, one day it doesn’t.