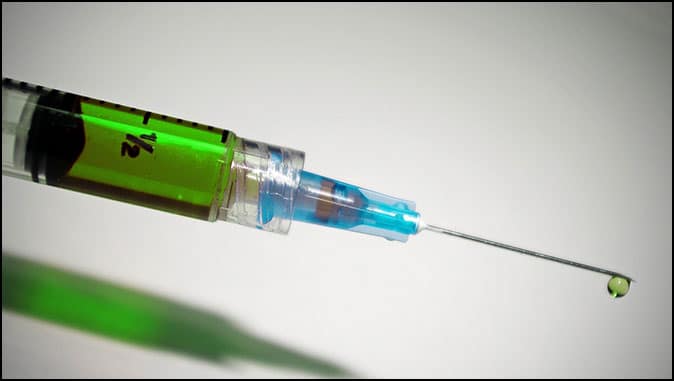 Joe and Kamala—There is No Vaccine for Hypocrisy!
By Don Boys

The Democratic National Convention (DNC) last week was unusual in that they twice removed “under God” from the Pledge of Allegiance to placate their Muslim and LGBTQ constitutes who claimed the mention of God is “offensive” and “nonsense.”

The Biden-Harris team declared, “there is no vaccine for racism.” Neither is there a vaccine for hypocrisy or lying!

Moreover, no one at the convention thought someone should at least refer to the fact our major cities (run by Democrats) are burning at the hands of BLM and Antifa revolutionaries.

But we were permitted to hear from Donna Hylton, a 55-year-old woman who is one of “America’s most impactful community leaders.” However, Donna was “convicted for the kidnapping, rape, torture, and murder of a 62-year-old Long Island real estate broker in 1986.” The torture involved using plyers on the victim’s testicles. Most honest people would think the DNC should have at least suggested that Donna had been a little violent in her past.

However, the purpose of the convention was to choose and present to the voters the Democrat’s choice of President and Vice-President of the United States. While Joe and Kamala did an acceptable presentation of themselves with their usual careless and vitriolic attacks upon President Trump, their hypocrisy would gag every buzzard east of the Black Hills of South Dakota.

I had to fight my body’s retching reaction whenever Joe and what’s her name used such hallowed terms as moral, decent, values, and principled. Joe’s “decency is on the ballot” and to “tell the truth” would gag a maggot.

Those above qualities are all highly admirable attributes to be acquired; however, they are only notable in people who have character. Unprincipled people never exemplify them. Joe and Kamala have spent a lifetime denigrating and desecrating and dodging those same desirable principles.

However, they tout them during political campaigns since they work with dummies, demagogues, and Democrats. But I repeat myself.

While in law school at Syracuse University in 1965, Joe was caught plagiarizing and admitted taking five pages from a law review article for his 15-page report. He said his “mistake” was neither intentional nor “malevolent.” He didn’t steal a thought or phrase but five pages, word for word. He asked the university for permission to leave the school so he would not be labeled “a cheat.” Of course, he got an F but was permitted to take the class again and passed. Moral, decent, truth? Whatever the university did, Joe was still a cheat.

His lying continued after college when he told a reporter that he was in the top half of his class when he was at the bottom of his class. He said he was involved in civil rights marches then admitted that he did not march. But he admitted that he worked as a lifeguard at an all-black swimming pool. He declared he had been “shot at” during a visit to Iraq then had to admit it was not true. He told of being arrested in South Africa when trying to visit Nelson Mandela but admitted it was not true. Sorry, but it’s a fact that our next possible President is a fabricator. That sounds better than using liar.

He was forced to drop out of the 1988 presidential race after it was revealed that he stole some of JFK’s and Bobby’s speeches. Following Joe’s acceptance speech, even liberals like HuffPost accused him of stealing a Canadian politician’s words! Joe is a slow learner. Maybe a vaccine for lying could help him.

Joe is on the record as saying migrants who cross the border illegally “should have to get in line” unless they are seeking asylum, but he does not believe that today. What does he really believe? Do we believe flip or flop?

Joe teamed with Senator Strom Thurmond in a joint effort to oppose integrating schools in the 1970s. That action horrifies Joe today, but more importantly, it horrifies all on the left. If Joe wants us to know the truth, let us have the truth.

Jill Biden’s ex-husband has accused the potential first lady of having an affair with Joe Biden and says, “They lied about how they met in the 1970s, according to a bombshell new report.” Joe, what was that you said about decency? And, what about “telling the truth?” What about breaking up a man’s home by sleeping with his wife since that is not normally associated with decency, morality, or principled? But then, the way words have lost their meaning and the way unprincipled politicians use anything to make themselves look good, maybe such deception is acceptable in our Brave New World.

A female Democrat in Nevada revealed Biden’s “demeaning and disrespectful” smelling her hair and kissing her head with hands on her shoulders.

The media have been very quiet about the numerous incidents of Biden handsy, handling, and hugging numerous children even in the presence of their parents and recorded on television! One YouTube video presents numerous incidents of him being “Creepy Joe.” One headline screamed: “Dad Confronts ‘Creepy’ Joe Biden Over Child Molestation,” but Joe did not answer his question: “What about the girls you molested on C-SPAN at the Senate swearing-in?” Moreover, the man was removed from the public meeting.

March of 2020 was a bad day for Biden when Tara Reade, one of his former Senate aides, publicly charged Biden with sexually assaulting her in 1993. According to the Business Insider, Biden pressed her against a wall in a Capitol Hill hallway, reached under her skirt, and digitally penetrated her. The report quotes her saying, “she filed a complaint with the Senate personnel office concerning Biden’s alleged ‘sexual harassment and retaliation,’ but didn’t mention the alleged assault.” Biden has unequivocally denied assaulting or harassing Reade.

Seven other women accused Biden of “touching them inappropriately or invading their personal space in ways that made them feel uncomfortable. [They] said Biden’s behavior did not amount to sexual harassment or assault.”

He later said he’s “not sorry for anything that I’ve ever done.” He doesn’t know the difference between right and wrong.

Whatever happened to the Me Too Movement?

Joe’s vice-presidential choice said she believed the women who accused Biden of inappropriate contact, including touching and kissing. “I believe them, and I respect them being able to tell their story and having the courage to do it.” Does she still believe that?

Joe Biden’s son Hunter assured us of his father’s “honesty” and integrity at the convention while introducing his father. But that’s like Italian Benito Mussolini vouching for his German buddy with the bad haircut and funny mustache: “Yea, Adolph is a misunderstood former choir boy who always keeps his word.”

The same Hunter made $1.5 billion on a questionable foreign deal. Joe can settle this fiasco once and for all: tell the whole truth about it, open all appropriate records, and ask for all involved to be candid.

I could go on and on about flip flops and other charges; however, the question demands an answer: Is this man qualified, apart from his famous gaffs, to be the leader of the free world? If not, and it is discovered after he is elected, the office will go to Senator Kamala Harris, a woman of color—as if that matters. Evidently, it does matter to many Democrats, thereby proving they are racists.

Harris was Attorney General of California and had the reputation of sleeping her way to the top of the heap. She was openly the mistress of Willie Brown, former mayor of San Francisco, so our possible Vice-President is a fornicator. More than that, she is an ingrate. After getting to the top with the help of Brown, she now says, “His career is over; I will be alive and kicking for the next 40 years. I do not owe him a thing.” Well, no, I suppose she has already paid him; they both got what they wanted.

That’s why prostitution is still the oldest profession. The quid pro quo works.

Some of the leftist press, seeking to mitigate her fornication, say the charges “are technically true but given Brown had been separated for about a decade, the claims are misleading.” No, the fact Willie was separated from his wife makes no difference at all. They were both fornicators.

Kamala lied about smoking weed in college while listening to the “music” of Snoop Dogg and Tupac. It was untrue because Harris graduated college many years before their albums were released. Senator Gabbard (who was nowhere near the DNC) said, “She put 1,500 people in jail for marijuana violations and then laughed about it when she was asked if she ever smoked marijuana.” Harris has admitted to its use. There is another need for a vaccine for hypocrisy.

Kamala is not a descendant of slaves but of a slave owner! The Jamaica Globe quoted her father, professor Donald Harris saying, “My roots go back, within my lifetime, to my paternal grandmother Miss Chrishy (née Christiana Brown, descendant of Hamilton Brown who is on record as plantation and slave owner and founder of Brown’s Town).” Brown’s Town is an inland town a few miles from the Jamaica coast.

It would seem there will be no reparations for Kamala.

So our possible next Vice-President is not only a fornicator but also a hypocrite. Maybe Dr. Fauci can develop a vaccine for hypocrisy.

If the normal, moral, decent, liberty-lovers stay home on November 3, Joe and Kamala will be moving to Washington.

Where can I move?